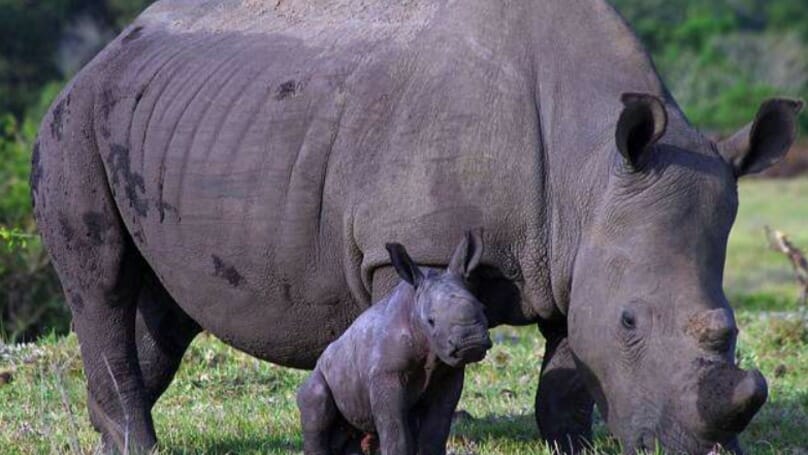 Poachers in South Africa have killed a rare white rhino in order to claim less than 1 inch of its horn, according to reports.

The female rhino, Bella, was attacked in Kragga Kamma Game Park in Eastern Cape, South Africa, despite the fact she had previously been de-horned in an attempt to save her life.

The perpetrators tore into the 20-year-old’s face to steal 1cm worth of horn, leading to widespread backlash from animal conservationists the world over.

Bella, a rare white rhino, was a mother of four, and had recently been photographed alongside her youngest, a male named Tank.

A Rhino Story: Two weeks ago, I had the privilege to visit Kragga Kamma Game park and witness this amazing family of white rhino. If you listen carefully you can hear the baby calling for its mother, Bella. pic.twitter.com/3X3fOBdU8G

The young calf, now orphaned, was also injured in the attack, though reports suggest this came as a result of Bella trying to push him to safety – not via the poachers themselves.

Ayesha Cantor, who runs the park, issued a heartfelt statement on Facebook following the attack. She described her disbelief whilst writing: “Its just so unreal, for 1cm of horn – we cannot comprehend the waste of it all.”

Tragedy of Bella the White Rhino: Rare African beast is killed by poachers for less than an INCH of her horn – leaving four calves orphaned in South Africa https://t.co/MVKlACaZpe pic.twitter.com/ba0sINAjX2

“We have always been acutely aware that these rhino are everyone’s rhino, that we are merely their custodians, this has been evident in your outpouring of emotions.”

Tank, meanwhile, has been seen trying to befriend another mother following Bella’s death, but isn’t thought to be struggling from the injury he picked up.

According to Save The Rhino, there remain between 19,666 and 21,085 white rhinos left in the world, placing them in the ‘Near Threatened’ category as a species. In the early 1900s, they were nearly wiped out, with numbers falling to as low as 50-100 in the wild. The vast majority of white rhinos call South Africa their home, with keepers on the Eastern Cape regularly removing their horns to try and discourage would-be poachers.

Bella, a 20-year-old white rhino with a young calf, was dehorned a week before she was shot dead by poachers at Kragga Kamma game park in the Eastern Cape https://t.co/LnFdF3Pi3p

Personally, I’m incensed by the fact that rhinos are still killed for their horns, even after they’re de-horned to prevent such a fate. The world needs a tighter and more cohesive conservation plan if we’re to save the species most at risk, but it’s vital that we continue to spread awareness.

If, like us, you envisage a world where poaching is no longer a major problem, SHARE this article to show your support!