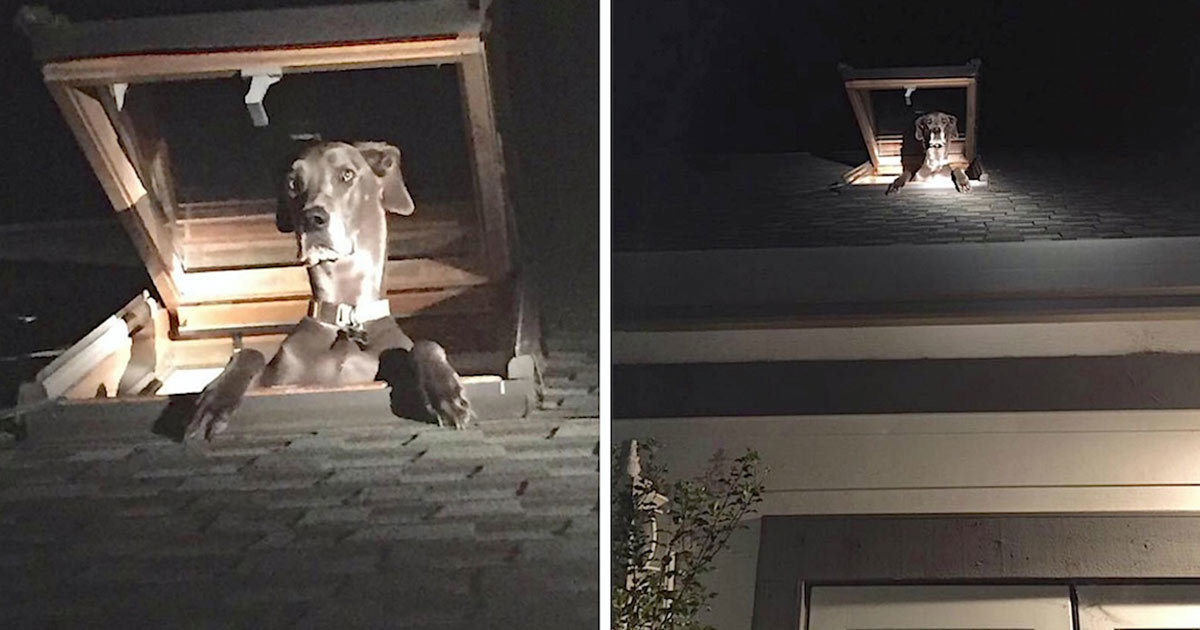 On an October evening in Sonoma County, California, an 18-year old was alone at home with his dogs.

In a panic, the teen grabbed the phone and called the police. He told them that his house had been broken into and that the intruder was upstairs. Police officers were instantly dispatched to the scene.

The teen quickly counted his dogs and then locked himself and his dogs in a room so the suspected burglar wouldn’t be able to harm them.

When the police arrived on the scene, some of them went inside while a couple of others examined the perimeter of the house.

Then, one of the officers heard a scraping sound. He swung around with his flashlight—and shined it at the roof.

“The deputy said, and I quote, ‘At that point, we ditched all tactics and died laughing.'” police spokesman Spencer Crum told The Dodo.

“The Burglar” wasn’t a burglar at all—but a curious, Great Dane poking out of a sky light, wondering what was up.

It turns out that the dog belongs to the teen, and he had tiptoed upstairs while his owner wasn’t paying attention.

The Great Dane simply wanted to enjoy the view and a take in a bit of fresh air. And the other dogs weren’t barking at a burglar, but were just frustrated that they weren’t tall enough to peek out through the skylight like their sibling. In all the commotion, the Great Dane’s owner simply forgot about the dog while he was bringing the others into the safe room.

“I’ve done this job for 25 years, and there’s been a lot of strange calls. A dog mistaken for an intruder in his own home? That’s pretty abnormal,” Spencer Crum told The Dodo.

If you also got a laugh out of this story, please share it with your friends on Facebook!