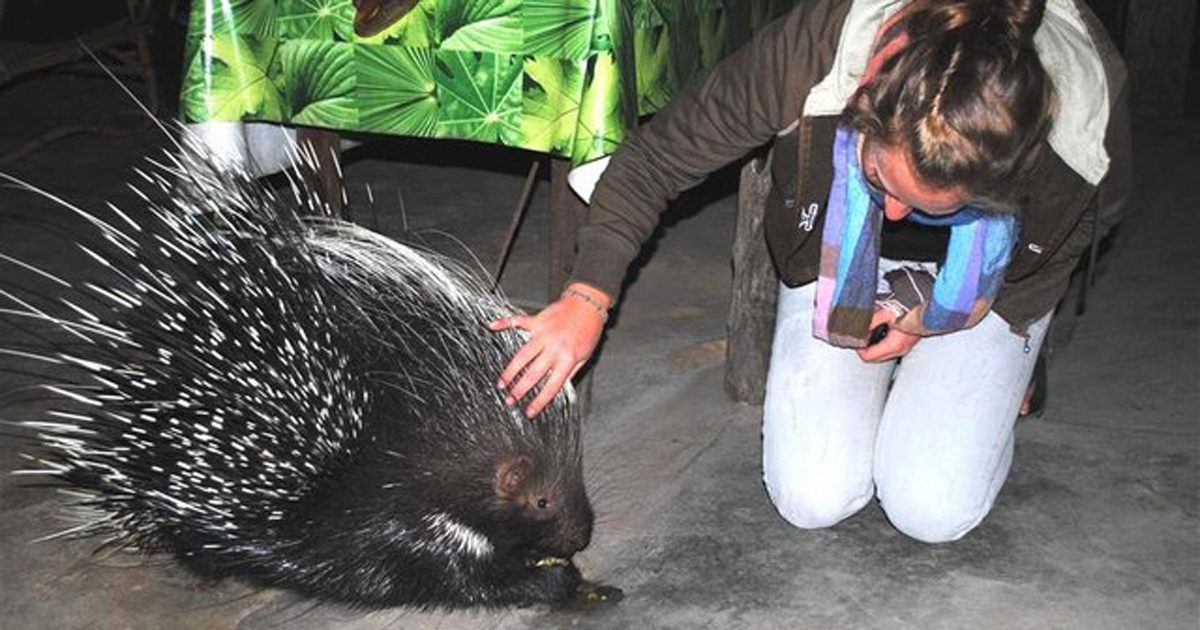 A porcupine named Spikey could have met a tragic fate after getting caught in a trap at a potato farm in Hoedspruit, South Africa.

A farmer noticed an animal was eating his crops and set a trap to catch the culprit. But he wasn’t prepared to catch a porcupine. Spikey was just a baby and wouldn’t survive long in the wild, so the farmer knew he had to do something.

But instead of killing the porcupine, he contacted Daktari Bush School and Wildlife Orphanage and asked if they would care for the little creature.

Daktari takes care of injured and orphaned animals in South Africa. They also educate local children on how to care for animals and the environment.

Ian and Michele Merrifield work at Daktari and offered to adopt little Spikey.

Ian and Michele had never cared for a porcupine before, so they read up about what the little cutie needed to grow up to be a healthy porcupine.

They bottle-fed Spikey at first, and it didn’t take long before he would eat the solid food. And oh, did he love food!

Spikey immediately became popular with the children at school. He mostly ate and slept, but he also played a little with the local kids.

Spikey loved to cuddle, just like a puppy. And he was happy to sit in people’s laps and get petted.

Time passed and Spikey grew. Then after the porcupine had lived at the orphanage for a year, Ian and Michele decided that he was ready to be released into the wild.

They released him, but continued to put out food for him. Spikey came and went as he pleased, and seemed to be doing well.

But then something happened. Spikey suddenly returned—with a surprise.

It turned out that he was a she, and Spikey had become a mom!

Ian, Michele, and the students at the school were overjoyed. They’d been convinced that Spikey was a male, and no one was prepared for the sudden increase in the local porcupine population.

Ian thinks Spikey was proud and wanted to show her babies to her adoptive family.

“It’s wonderful seeing Spikey live a full life in the wild, and having a family of her own. I feel like a very proud parent,” Ian told The Dodo.

What a nice story. I’m glad Spikey found such a good adoptive family. Now we wish her luck with her own little family!

Please share this with your friends and Spkiey’s story also made you happy!