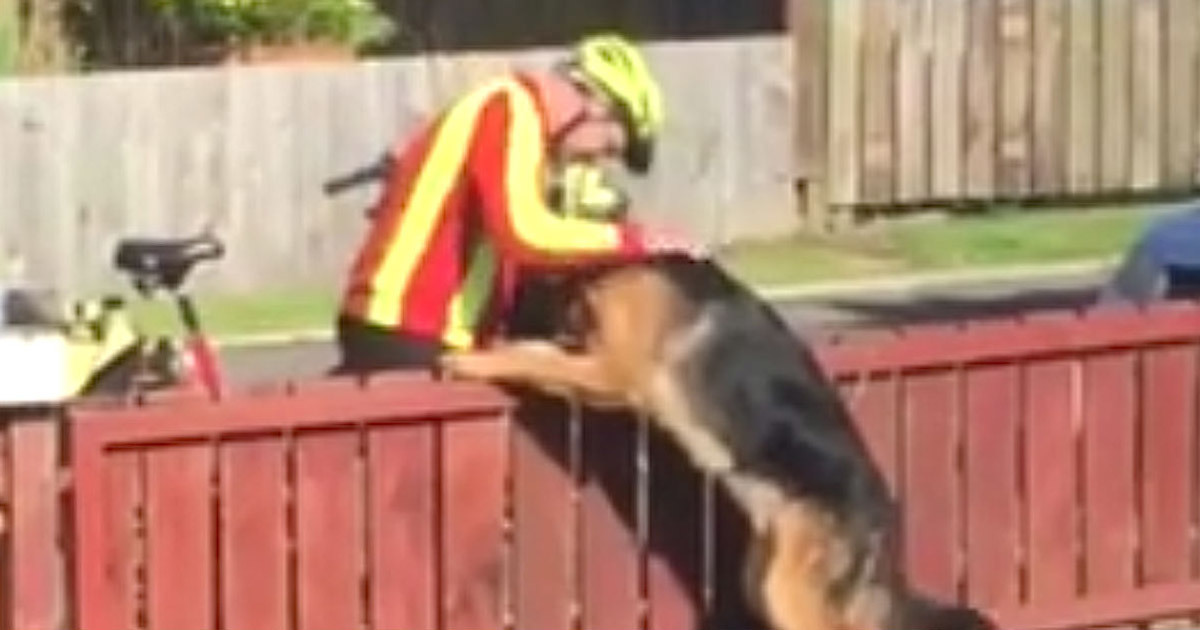 It’s often said that dogs aren’t particularly fond of postal workers. So when a mail carrier sees a large German shepherd waiting near his owner’s mailbox, you might expect that postal worker to drop off the mail as quickly as possible and run like the wind.

Dog owner Michael wrote on Facebook that his dog, 9-month-old German shepherd Kyza, is misunderstood. Kyza isn’t doesn’t have an aggressive bone in his body, and he doesn’t bark or howl at strangers. His dad thinks that any fear that people have of him is just based on the dog’s size.

Someone who sees past the prejudice to Kyza’s gentle soul is Steve, the postman who delivers Michael’s mail. Recently, Michael looked out the window and saw something surprising. The postman delivered the mail, peddled his bike over to Kyza, and gave the dog a friendly hug and a pat on the head. And it wasn’t just a one-time occurrence. The loving encounter between dog and mailman has continued day in and day out since then.

“Every day whether or not we have mail, this mail man always stops to see my dog,” Michael wrote on Facebook. “This guy here always makes an effort to get off his bike to give him a hug and a pat! I’m not sure who to tag on Facebook for him to see this! But thanks, man. Keep up the good job and you’ve definitely got a friend waiting for ya!!”

Michael recently filmed the entire event on his camera phone. And you can sees that Kyza is overjoyed to meet his good friend Steve every morning! The clip just melts my heart, not just because of the bond between these two unlikely friends, but also because it’s a good reminder that the prejudice against big dogs is just plain wrong.

Please share this aww-inspiring moment with all of the animal lovers in your life!