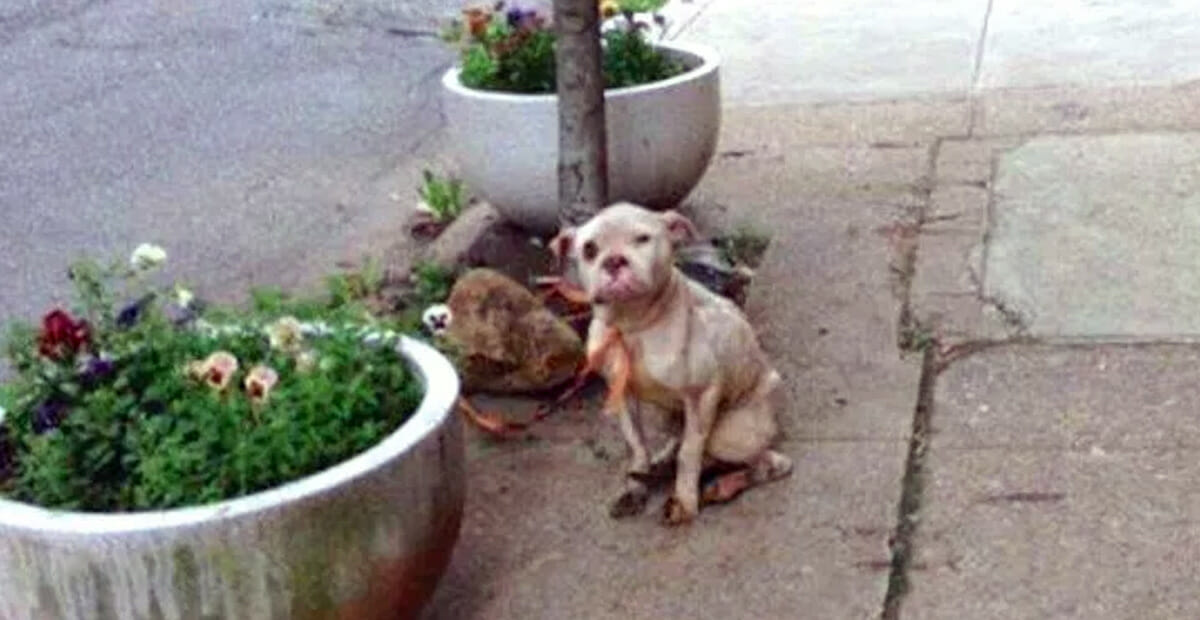 The vast majority of mail carriers/ delivery men deserve respect for their work; irrespective of the weather conditions outside, they battle on day after day to ensure we our post.

Some also have hearts of gold, as proven by a recent story that’s narrative tells of one mail carrier’s experience with a particular dog that everyone believed to be “dangerous”.

That mail carriers and delivery drivers come into contact with different animals is no surprise. Daily, they’ll encounter curious cats sitting on a mailbox, or perhaps a dog dozing in a front law.

For mail carrier Dan Targonsk, his workday began like every other one. During his rounds, however, he stumbled upon something he simply couldn’t ignore.

He spotted a starving, dirty Boxer, sitting alone on the sidewalk. At once, Dan knew something was wrong.

The dog was tied up to a tree, without food or water, left to bake in the hot sun.

Instead of ignoring the dog and continuing with his day, this amazing mail carrier decided to give everyone a valuable lesson in how to behave when you see neglected animals.

The first thing Dan Targonsk did was rush to get water.

At the same time, he called a local animal rescue organization in Philadelphia. He refused to leave the Boxer’s side, staying with her until she was rescued.

The kind-hearted people at Adopt a Boxer Rescue soon took over care of the dog, naming her Kuperus.

They discovered, amongst other things, a large wound on her head which was either caused by a bullet or a knife. Kuperus was also suffering from a broken jaw and several of her teeth had to be removed.

However, despite the terrible abuse and neglect Kuperus suffered, she almost immediately showed what a sweet, loving and charming pup she was underneath the rugged facade.

“It boggles my mind how she craves attention,” says Dawn Karam, founder of Adopt a Boxer Rescue.

“She really wants nothing more than to be touched… even after some terrible human beat her and left her to die. Simply amazing.”

While Kuperus recovered in a foster home, the animal shelter that rescued her worked tirelessly to find the person responsible.

It’s unclear whether or not the abuser was ever found, but, thankfully, in July 2013, she was adopted by a new and loving family.

Kuperus was finally given the life all dogs crave and deserve – she even got the chance to meet Dan again!

After making a full recovery, Kuperus made several television appearances, going on to win the hearts of dog lovers up and down Philadelphia.

She also became a symbol for those looking to raise awareness about animal rescue – all because of quick-thinking from one mailman.

Hopefully, this story can be used to enlighten people. Many of us might willingly walk by a tied-up dog that looked dangerous. Dan didn’t, though, and it made all the difference in this dog’s life.

Sending lots of congratulations and love to this Boxer – we’ll never understand how dog owners can be so heartless sometimes.

Feel free to share this story with all your animal loving friends. Let’s thank Dan together for his big heart and sense of responsibility.

After all, if more people were like him, the world could be a better place.