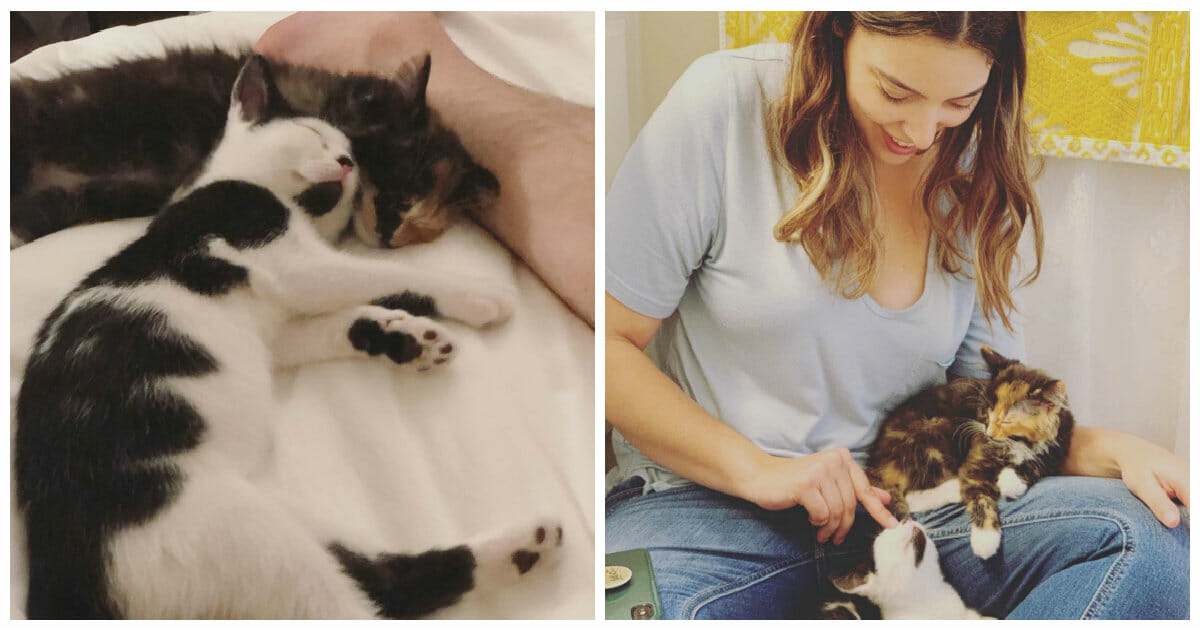 Sometimes pets form close bonds with each other, comparable sibling relationships between humans. Shelter animals can become so attached to their buddies that it can be hard to separate them, which can make it hard for them to find a new home. It’s not often that potential adopters are willing to take in two animals at once.

But some people know not to get in the way of a true friendship: When one woman inquired about adopting a stray kitten, she ended up taking home her BFF, too.

Naomi is a calico kitten, who was found as a stray in June, wandering the streets of Commerce, California. Animal control brought her to Friends for Life RescueNetwork, an animal rescue based in Los Angeles, LoveMeow reported.

While she was covered in fleas, she was in good health and proved to be one lively kitten.

However, it was clear that the kitten could use a pal: “Naomi was a spitfire with major single-kitten syndrome and needed a buddy to help teach her how to ‘cat’ properly,” Jacqueline DeAmor, founder of Friends for Life RescueNetwork, told Love Meow.

Luckily, the rescue had just days before adopted another kitten named Sushi.

Jacqueline had a feeling that the two kittens would hit it off, and introduced them.

“I knew right away they were meant to be a pair. Sushi was sweet, calm, gentle and had the biggest purr machine. She calmed the fiercest of kitty friends with her sweet, playful nature.”

The two kittens began lovingly playing with each other, and it was soon clear that they were inseparable.

Omg these two are so silly and adorable!! #playtime #kittensplaying #kittensofinstagram #adoptdontshop

As the kittens bonded at the shelter, a woman named Vicky Arias was looking to adopt a cat. She came across a photo of Naomi on Instagram, and inquired about adoption.

“I was the first one to reply asking how to adopt her,” Vicky told LoveMeow. “I offered to foster her in order to be the first pick for adoption.”

But she soon realized that Naomi was attached to Sushi, and it was clear they would have to be adopted as an item. However, this didn’t stop her from adopting the kitten—on the contrary, she was more than willing to bring the second kitten into her home.

“That’s when I found out she was part of a bonded pair — to me, that was perfect,” she said.

Can you tell we were looking forward to this weekend? #kittens #kittensofinstagram

The two kittens have adjusted well to their loving new home, and they’ve kept up their sibling relationship. Vicky says that Sushi learns things quickly and is the leader of the two, while Naomi looks up to her and follows in her footsteps.

“Sushi definitely took on the role of a big sister, teaching Naomi not to bite or scratch so hard,” Vicky said. “While Naomi is a literal copycat, like all little sisters, she does exactly as the older one does.”

“She’ll even step in Sushi’s literal paw prints sometimes. Yet she’s a bit more impatient, talks to us a lot.”

It’s clear these kittens are inseparable, and benefitting from each other’s company as they grow up. You can see more of these kittens on their Instagram page, @naomiandsushi.

Let’s thank Vicky for taking in both cats and not breaking up this perfect friendship! Share this story!