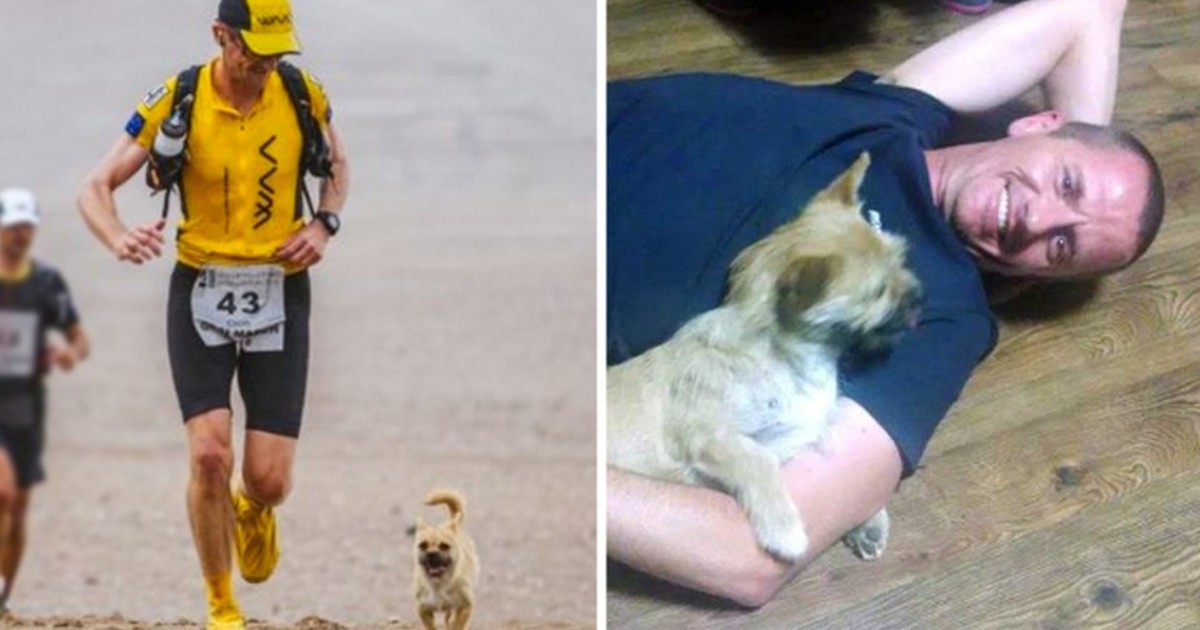 This is the story of a little dog named Gobi, who met a friendly human on a 155-mile race across China and won the greatest gift of all: his heart. Now Dion Leonard, her constant companion during the race, is trying to bring his beloved dog home to Scotland.

Dion Leonard, an extreme marathon runner from Scotland, was competing in the 4 Deserts Gobi March 2016, a six-day race across Asia’s largest desert, when a homeless dog ran up beside him.

The dog, who had been living near the race’s starting point, apparently got caught up in the spirit of the race and took off with the 101 human runners.

At the end of the first day, the dog finished the first day’s 22-mile stretch right beside the other runners. And the next day, the dog named Gobi was back in the race, this time choosing Leonard as her running partner. And from that point on, Gobi and Leonard became inseparable.

Though Gobi didn’t have any training (besides being a dog) or any special equipment (besides her paws), she managed to keep up with the elite human athletes for the entire race. And by the time Leonard reached the finish line, he knew that the next leg in Gobi’s journey would be to join him back in Scotland.

“Gobi picked me to be her pal for life,” Leonard told The Dodo.

Bringing Gobi back home to Scotland would take time and paperwork, so Leonard left his canine companion with a trusted friend while he went ahead to Scotland. But once back home, Leonard received worrying news—Gobi had gone missing.

Within days, Leonard was on his way back to China to try and find his friend.

With so many stray dogs in the area, the chances of Leonard finding Gobi again were slim to none. But that didn’t stop Leonard. He passed out flyers and and searched tirelessly for his beloved dog. Then a few days ago, someone recognized Gobi from the flyer and contacted Leonard!

And soon, the two friends were reunited.

Leonard told the BBC, “When we got there, I walked through the door and she came running towards me and ran around my legs and jumped up on me. It was love again at immediate sight. I’m going to try to do two things tonight: try not to cry and not to swear, I’m so excited. It’s one of the best days of my life.”

And Leonard wasn’t the only one happy to be back in the arms of his best friend.

It will take some time until Gobi is cleared to go to Scotland. Until then, Leonard isn’t going to take his chances and leaving her behind again.

“I’ll be staying here as long as it takes to make sure everything is in place.”

I’m so glad that these two best friends were able to find each other again and I’m glad that they won’t be be separated again!

I hope you can enjoy so great runs in Scotland soon, Gobi!

To support Leonard in his efforts to bring Gobi to Scotland, visit his Crowdfunder page. And please share this heartwarming story with all of your friends who love animals!