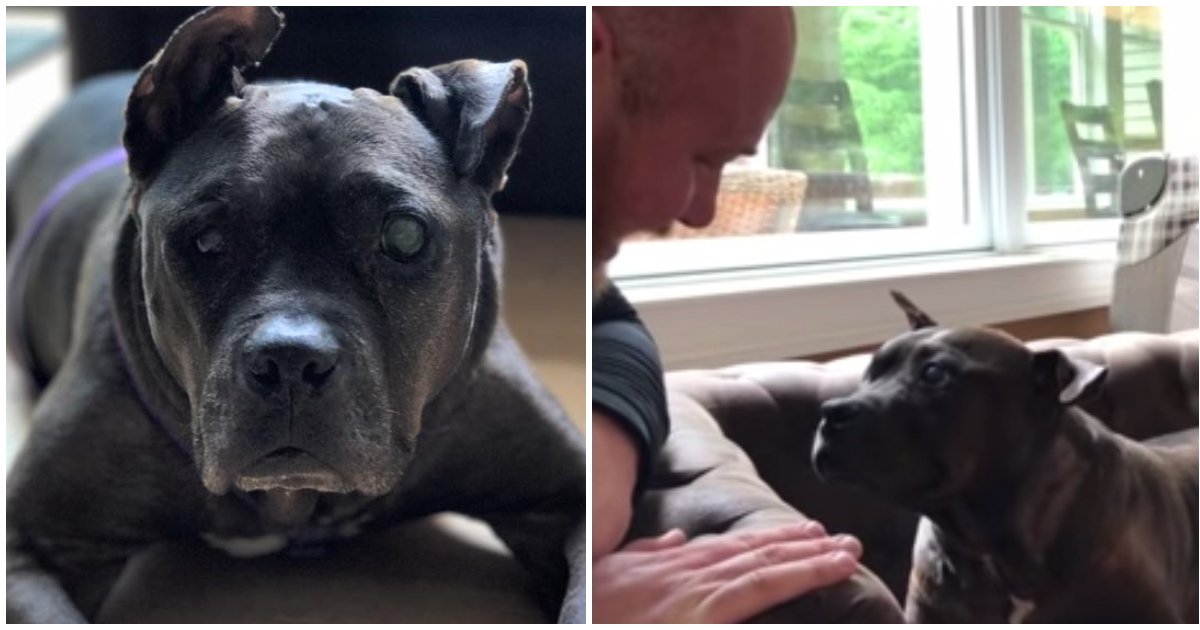 Dogs don’t stay puppies forever, and as they get older and start to slow down a bit, they need a little extra love from their owners.

That was the case for one couple, who had an unexpected idea to improve their old dog’s quality-of-life as she lost her eyesight — and an adorable viral video shows the amazing difference it made.

It’s no secret that Chris and Mariesa Hughes are passionate about animals. They are the founders of the Mr. Mo Project, and have spent $55,000 of their own money to turn their home into a senior dog sanctuary.

Many old dogs have come into their care over the years, but the story of Gremlin the pit bull is especially inspiring.

Life was never easy for Gremlin. According to Today, she was first rescued from a life of dog fighting, and suffered a series of medical ailments including cancer and irritable bowel syndrome.

Gremlin overcame all these hardships — she was a sweet, happy pit bull who even became a certified therapy dog.

But everything changed in 2017, when Gremlin lost her eyesight following a cataracts surgery.

Gremlin could no longer see things right in front of her, and would constantly bump into furniture. It affected her quality-of-life, as the dog became easily startled and unable to play with the other dogs.

“It was awful to see, and it seemed she just started sleeping a lot more,” Mariesa Hughes told The Dodo.

Worse, she even started to become distant with her owners.

“That was the worst,” Mariesa told Today. “You don’t want to go to love on your dog and have her be absolutely scared to death.”

Gremlin’s owners were heartbroken to see their dog suffering like this. But they have given their lives to helping senior dogs, and weren’t going to give up on Gremlin.

They contacted local vets about possibly getting their pit bull glasses to improve her vision. Then, a veterinary ophthalmologist named Dr. Petra Lackner suggested a surprising idea: contact lenses.

It’s not very common for contact lenses to be prescribed to pets, but it soon proved to be the perfect solution for Gremlin’s vision problems.

After putting the contacts in Gremlin’s eyes, Chris and Mariesa saw immediate results.

According to a Facebook post, Gremlin’s whole attitude immediately changed when she realized she could see. She leapt off the exam table and began running around the hospital.

“I think all of us had tears in our eyes when she looked up, as if coming out of a daze, and took off!” Mariesa told The Dodo. “It still gives me goosebumps.”

After that, Gremlin’s life improved significantly. She was finally able to see things in front of her, get around the house with ease, find her food bowl, and play with her fellow dogs.

And sometimes, she’d just take a moment to reflect.

“The defining moment was when she saw herself in the bottom of the door. You know the part where there is a little mirror-like kick plate? She lay down in front of it and just stared at herself,” Mariesa told Today. “It was amazing.”

Too many people abandon their old dogs once they become inconvenient, but the Hughes’ stop at nothing to make sure their senior dogs are living their best lives.

“They are our family and we have made a promise to them to give them the best life we can,” Mariesa said.

How remarkable! It’s amazing how such a small things can completely change a dog’s life. Thank you to everyone who helped this dog see again!