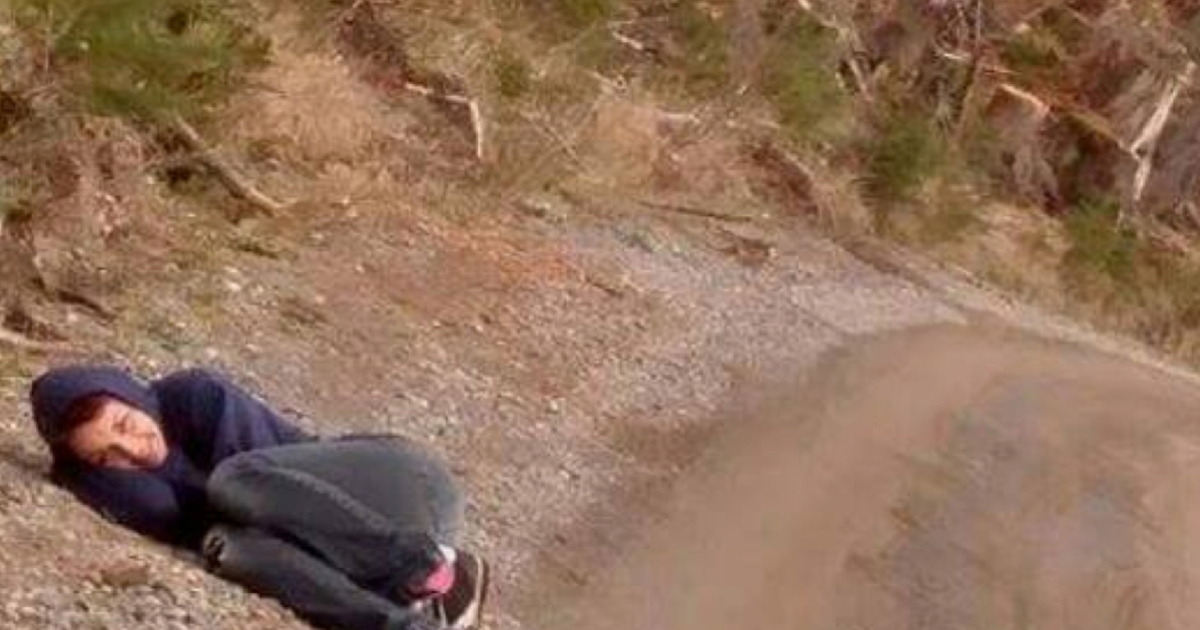 When Amanda heard of Bear, an abandoned, lost dog in the mountains of Evan’s Creek, she decided to act immediately.

Together with her friend Dylan, they set out to try to locate the lonely dog.

For over an hour, Amanda and Dylan tried to coax Bear using food and treats – but their plan failed.

The next day when they returned, they spotted Bear in the same area. They again tried to coax him to get closer so they could help him, but in vain.

That’s when the girls got, to say the least, a very creative idea.

They decided that Amanda would lay down and ‘play dead’, acting as if she were in need of help.

Said and done: The next day, Amanda lay down on the ground in the area they she suspected Bear was.

And what happened two hours later has filled thousands of animals friends’ hearts with warmth.

It all began when a driver spotted a dog at a campsite in Evans Creek, Washington State.

The dog looked both scared and malnourished. The dog got aggressive when the driver tried to approach him.

A few days later, a girl named Amanda got wind of the wild dog, known as Bear.

Amanda and her friend Dylan decided to try to save the dog and take him to an animal hospital.

They tried to attract Bear with treats – but to no avail. The dog was still too suspicious to dare approach people.

She layed down in fetal position and played dead.

And soon enough, Bear seemed to embody the spirit of help.

He approached Amanda and sniffed at her for 20 minutes, then lost interest and went away.

But Amanda didn’t give up. One hour later, he was back. This time, he simply sat beside Amanda.

Within the next two hours, Amanda won Bear’s trust and he could be certain that she meant him no harm.

He followed her to the car and together they drove off to the vet.

Bear finally got the help he so desperately needed – thanks to these amazing animal friends who refused to give up on him.

Animal welfare organization Lost & Found Pets in Washington has tried to locate the dog’s owner, but with no luck.

Fortunately, a family got in touch and expressed its desire to adopt Bear, so he now has a loving home!

If reading about Bear’s fantastic rescue operation also warmed your heart, please share his story with others!