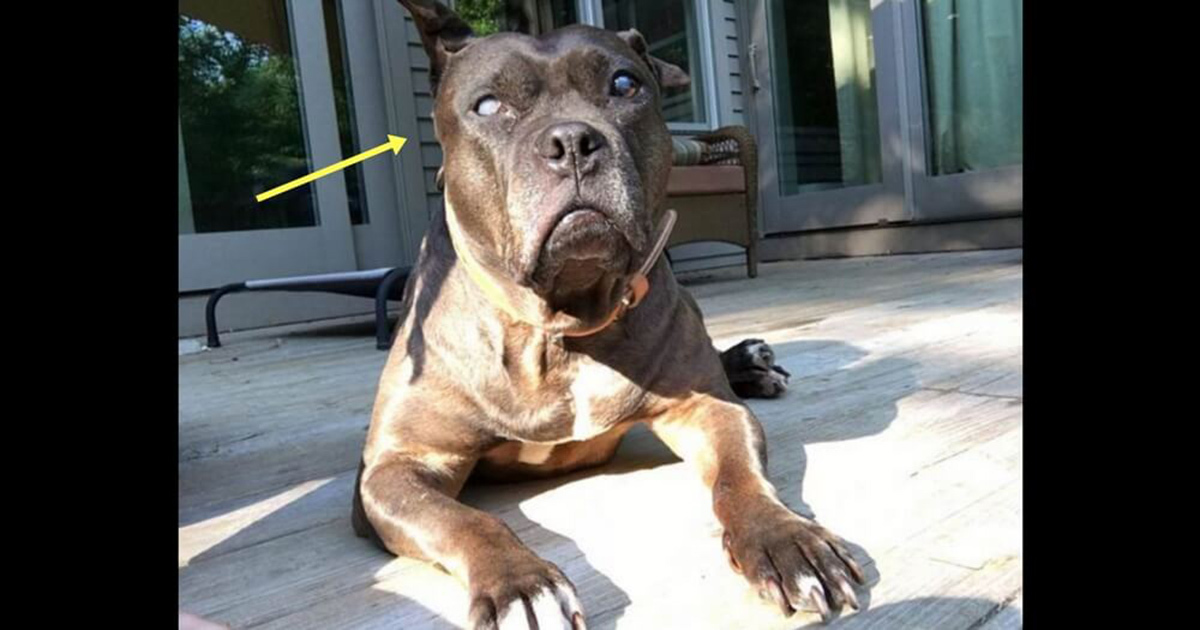 Meet Gremlin. She’s a pit bull that has been through it all in her life time – and then some.

When she was four she was rescued from a life of dog fighting, a betting sport where dogs are put in a deadly ring to fight each other. It’s not unusual for one of the dogs to either die or be left so injured that they are forced to be put down.

Seven years ago, Gremlin was finally given a new home when she was brought to live with a loving family, something she always deserved.

Sadly though, she has also been diagnosed with numerous diseases throughout the years. These include cancer, irritable bowel syndrome and the blood disease babesia. Gremlin however, beat them all – and survived.

To make matters worse, she has also been partly blind. A year and a half ago the family started to notice signs that might indicate she was suffering from cataract. She was taken to the veterinarian and had to be operated. The operation was risky, putting a lot of pressure on her right eye which was eventually left blinded.

Her eye was further deadened with an injection to ease the pain. Her vision was clearly impaired – leaving her badly far sighted, meaning she could only see from a far distance and not up close.

As you can imagine the poor dog became not only clumsy around the house, but also a nervous wreck, especially when someone got close to her. Her owner says that was the worst part of it all, according to Today.

“You don’t want to go to love on your dog and have her be absolutely scared to death. Her quality of life was suffering, and we really considered her happiness,” owner Mariesa Hughes told Today.

Hughes knew something had to be done and went on a mission to find a way to ease her dear pet’s suffering.

“I started contacting doctors all over the country about glasses for her to help improve her vision in her left eye,” she said.

There is actually such a thing as glasses for dogs. They cost a fortune however and need to be custom made for each dog. Instead, the doctor suggested another solution for Gremlin:

Hughes decided to try using regular contacts that humans use, which she ordered online.

She describes the moment Gremlin put the contacts on as seeing her “waking up from a daze.”

Hughes adds: “she kisses us, paws at us to pet her. She is happier.”

The best part of it all though, according to Hughes, is when Gremlin saw her own reflection on their front door.

“You know the part where there is a little mirror-like kick plate?” Hughes said. “She lay down in front of it and just stared at herself. It was amazing.”