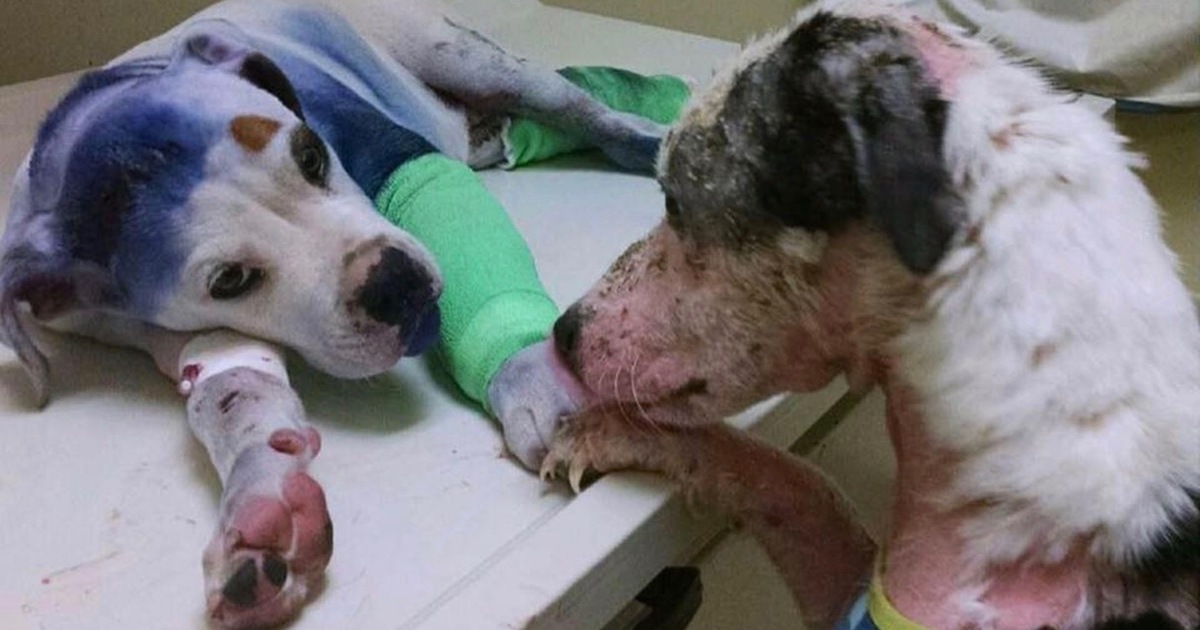 Sometimes, all it takes to get through a rough patch is a loved one’s helping hand. Or in this case, a helping paw. When boxer mix Sammie arrived at a New York City veterinary clinic, he was on his last legs. He’d been dragged behind a car, spray painted, and shot. But he wasn’t alone. As Sammie lay on the operating table after finishing up multiple medical procedures, one-year-old border collie Simon, himself still recovering from unspeakable abuse, saw Sammie lying there, raised his paw onto the table, and rested it on Sammie’s.

Sammie is only four months old, but the puppy has already been through horrific abuse. Before he landed in a shelter in North Carolina, the puppy had been dragged by a car, spray painted, and shot.

His case then caught the attention of Rescue Dogs Rocks NYC and he was transferred to a clinic for medical procedures and recovery. And that’s where he met Simon.

Perhaps it was the two dogs’ shared pain that brought them together, but their companionship has ensured that both of them will not only survive, but thrive.

Sammie, who was shot in the leg with a .22 rifle, may lose his leg, but he’s gained the support of Simon, the staff at Rescue Dogs Rock NYC, and countless online friends.

For now, Simon won’t leave Sammie’s side. Maybe it’s because he understands what Sammie’s been through or perhaps it’s because he knows he’s leaving the clinic soon, but Simon is giving his friend all of the love and compassion he can right now.

Simon, who is almost fully recovered, will be up for adoption soon. And his friend Sammie will be left to continue journey to recovery on his own.

Simon’s love and compassion for Sammie is incredible, isn’t it? It just goes to show you how loyal canine friends can be.

Jackie O’Sullivan, cofounder of Rescue Dogs Rock NYC, told The Dodo “The compassion and understanding between animals is beyond me.”

Although it would be impossible to give Sammie and Simon’s shelters in North Carolina and Rescue Dogs NYC enough credit for the dogs’ recoveries, I have to think that credit is also due to these brave and loving dogs themselves. Good luck, Sammie and Simon!

If you want to help Sammie and Simon continue on their road to recovery, consider donating to Rescue Dogs Rock NYC. And make sure to share this story with all of your friends who love animals.