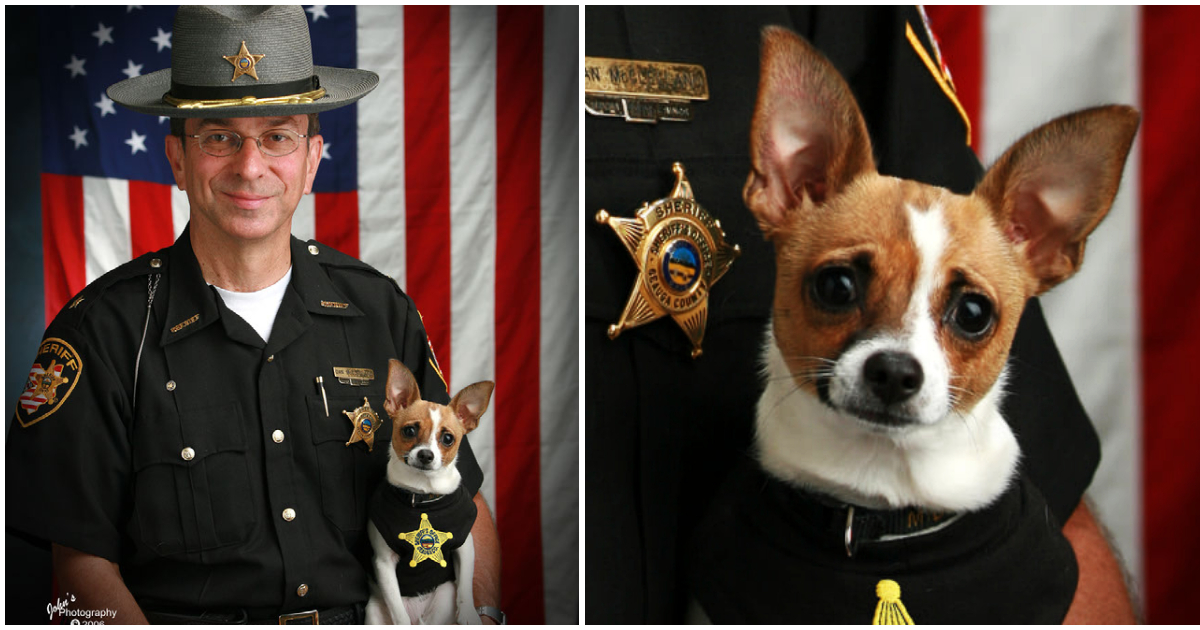 K9 police dogs are an important part of any police department. They are especially important to their handlers on the force, who view them not just as an animal sidekick but a true partner on the job.

That was especially true for one Ohio police officer and his one-of-a-kind K9 partner, whose lives and careers were forever linked.

And this week, in a sad but sweet end to their story, the two officers died on the exact same day, just hours from one another.

On Wednesday, the Geauga County Sheriff’s Office announced that Sheriff Dan McClelland, who served the county for 44 years before retiring in 2016, died at the age of 67.

And his former partner, a Chihuahua-rat terrier mix named Midge, died just hours later, as if of a broken heart.

Sheriff McClelland was considered a “pillar” of his community during his decades on the force, including 13 years as sheriff.

He won Geauga County’s Emerald Leader Award in 2014, and his bio lists career accomplishments like clearing a major burglary ring and saving the life of another deputy by disarming an armed suspect.

“It’s always been about family and bringing people together,” McClelland said about his career.

But as impressive as his resume was, he spent much of his career of his partner Midge, who was quite the celebrity.

At 11 inches tall and 23 inches long, Midge earned the Guinness World Record for the smallest police dog in 2006. Despite her tiny size, Midge was a pro drug-sniffing K9.

Midge’s new celebrity status overshadowed her human partner, but McClelland was happy to cede the spotlight to his favorite dog.

“He used to joke that people would see him in a parade in a car and would say, ‘Hey, there’s Midge and whatshisname,’” Sheriff Scott Hildenbrand, McClelland’s successor, told the AP News. “I think she was more popular than him.”

They both retired at the end of 2016, bringing an end to two very successful careers and a beloved partnership.

“He spent 44 years protecting people in this county and, quite frankly, he loved his job, every minute of it,” Hildenbrand said of McClelland. “I thought he’d never retire.”

That they died so close together is a bittersweet and fitting end to their lives together.

And now, they’ll be together forever: according to AP, Sheriff McClelland and Midge will be buried together.

It goes to show the real loving bond between a police officer and his K9 partner. Share this beautiful story.