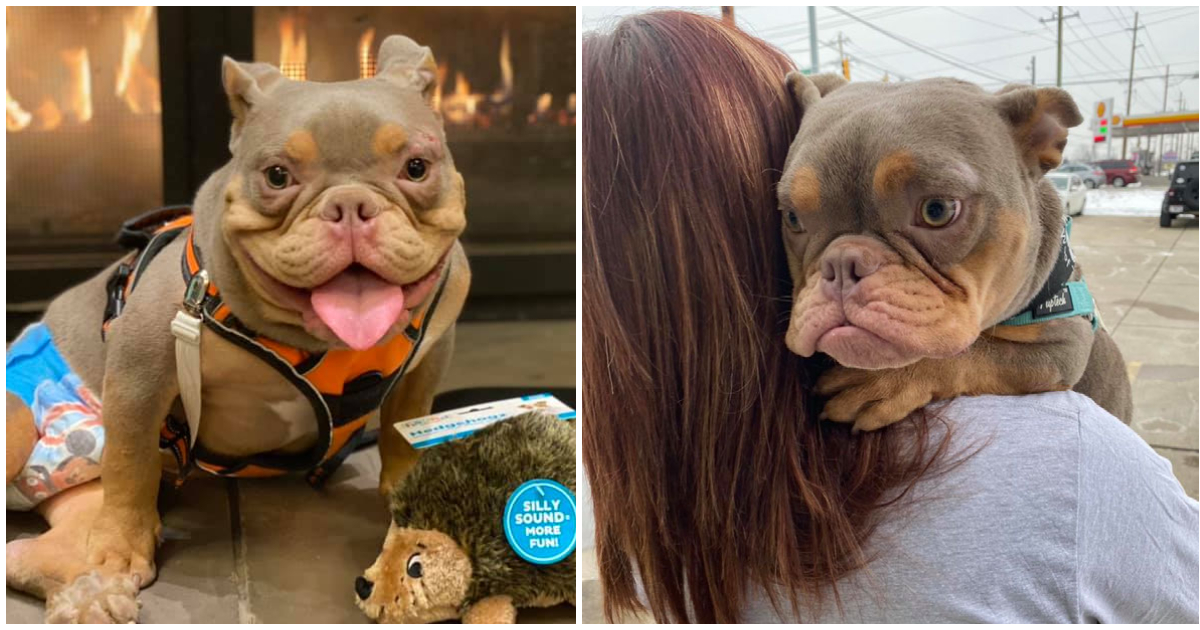 Last month, we told you about a special needs shelter dog whose story broke hearts all over the world.

Jack, a 9-month-old puppy with spina bifida, thought he was finally going to be adopted, only to be stood up at the last second.

But Jack and his carers didn’t give up hope — and now this dog’s story finally has a happy ending… for real this time.

Jack, an American Bulldog, has been in the care of Peaches Bully Rescue, in West Chester, Ohio.

While Jack has a sweet personality, he’s also a “special needs” dog who has spina bifida, a congenital abnormality that causes difficulty walking and incontinence in dogs. Jack has to wear a diaper full-time.

While Jack might not be the perfect pet for every family, the shelter still hoped to find someone who would be willing to care for this special dog.

And last month, it seemed like they had finally found someone. Peaches Bully Rescue scheduled a meet-and-greet with an interested adopter.

No one was more excited than Jack, who got cleaned up and dressed nice for the occasion. But sadly, his would-be family never showed up.

“No show, no call,” Peaches Bully Rescue wrote. “He had a bath, got his fancy harness on, had a fresh diaper, and a dedicated foster team that drove 40 mins each way just to end in huge disappointment.”

“Not showing up or calling is bad form.”

While it was a disappointing setback, it wasn’t the end of this little guy’s story, or his quest to find a home.

“Obviously, that wasn’t his family,” the rescue wrote.

Jack, while disappointed at the rejection, got a new toy to make him feel better. And that was just the start: once Jack’s sad story went viral, he received an outpouring of support and sympathy.

New friends from around the country sent him care packages, and donated to the rescue. “Who knew that our little Jack Jack would be so widely loved,” Peaches Bully Rescue wrote.

And out of those, they finally found Jack the perfect family — and this time, they actually showed up.

According to an update from the rescue from February 16, Jack finally got adopted for good, and his new family sounds perfect for him.

“This little wiggle butt was excited to start the next chapter in his life,” the rescue wrote. “He has a human sister to love on him, lots of toys and diapers that this gracious community donated, and a new stroller to ride around in style.”

It’s been a long journey for Jack full of ups and downs, but now he finally has the happy ending he deserves.

“We appreciate everyone who applied, offered warm wishes, donated to his care, and have shared his story,” the rescue wrote. “We especially thank his foster family who are dedicated to supporting him in his new home.”

We’re so glad this poor dog finally has a family who will love him just the way he is — he’ll never face rejection again.