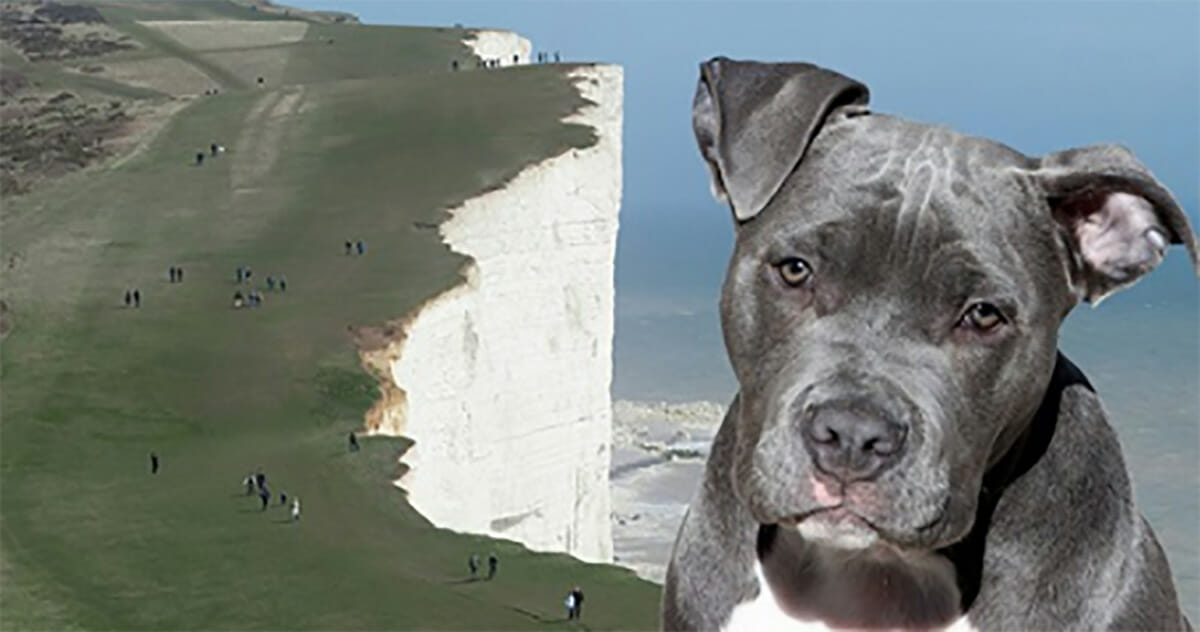 Despite all we know about the “sixth sense” of dogs, stories where dogs have sensed danger before humans never fail to impress.

From being able to detect cancer to sensing bad news is on its way before it’s reached you, are just some of the stories that dog owners have shared about their four-legged friends over the years.

While a Staffordshire Bull Terrier was on a walk with its owner near a dangerous cliff edge, he sensed someone was in trouble.

He didn’t even need to see the 14-year-old sat dangerously close to the 60-foot cliff edge to know there was something wrong.

Max stopped in his tracks and started to whine and pull on his lead. He knew there was a girl in trouble.

The cliffside near Sussex, England, has been the site of many suicides over the last few years so his owner George Connor was apprehensive about investigating.

“Being the nosey guy that he (Max) is, he started whining and pulling on his lead,” George told the Daily Mail.

“I could see a shape and thought it might be some rubbish, but when we got closer, I saw someone was sitting up there on the cliff ledge.”

George found the girl sitting close to the edge who had been there long enough for the effects of hypothermia to set in.

Eyes were rolling back into her head

Max refused to leave the teenager’s side until police arrived.

“The officers went over to the cliff edge and tried to get her attention, but she wasn’t moving. So, they decided to pull her through the fence and away from the edge,” George said.

“She wasn’t really coherent. It looked like she was suffering from hypothermia and the police said her eyes were rolling back into her head.

“It’s anyone’s guess how long she had been up there. She was sitting on a part of the cliff where, if she had passed out and fallen, she would have died.”

‘Ten steps ahead of the game’

The girl was taken to hospital and is expected to make a full recovery.

Six-year-old Max is now credited with saving the girl’s life. George is grateful for a trusted friend who always has his back.

“He’s got a great temperament and is a very friendly dog who is always ten steps ahead of the game,” George said. “If I’m ever ill he always notices. I don’t know if I would have found her without him.”

It doesn’t matter how many stories I read about the incredible instinct of dogs I will always be amazed. We’d be so lost without them!