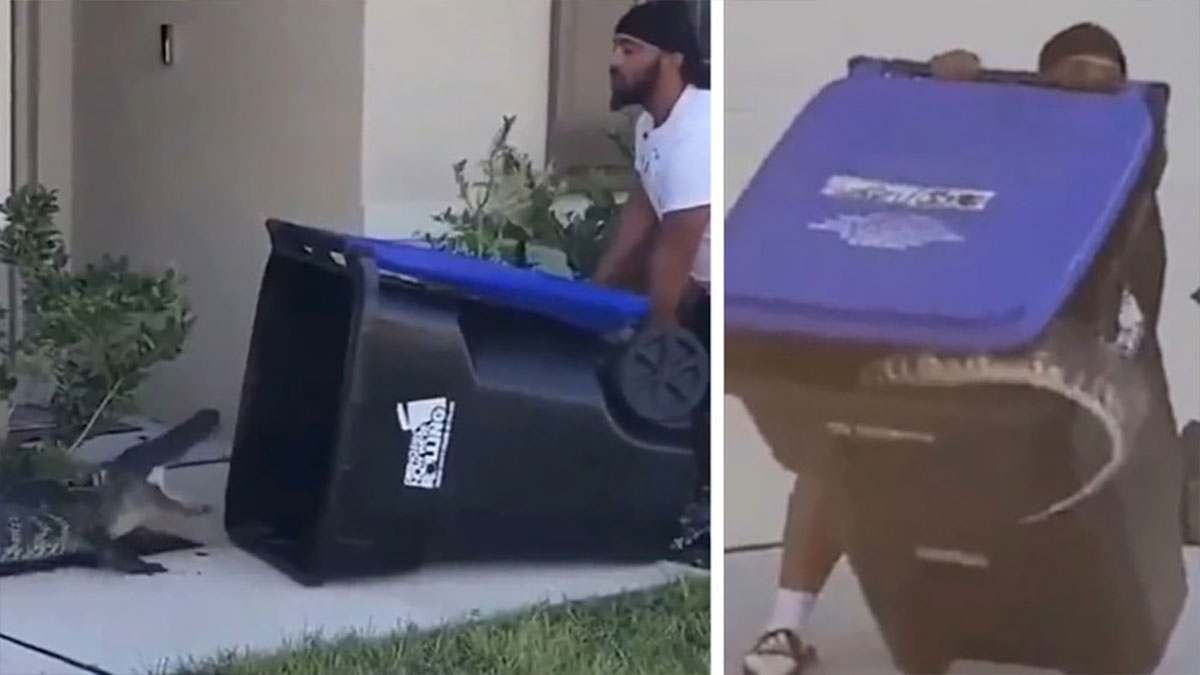 I think most of us agree that coming face to face with an alligator is probably one of the most terrifying things we can imagine.

Despite the fact you’re more likely to be killed by a snake bite or even a hornet than an alligator, the sheer size and ferociousness of an alligator leaves most of us extremely fearful of these mighty creatures.

But when one Florida man came face to face with an alligator on his front porch he chose not to run for the hills screaming, but instead decided to try and capture it.

The man, named as Abdul Gene Malik, an Army veteran, said he was protecting his family when the gator got into the front yard of his Florida home.

His awe-inspiring achievement in imprisoning the alligator, who chose his back yard to explore that day, was captured on camera and the video shared on social media.

Perhaps it was the device he used to capture it, or the calm nature in which he managed to ensnare it, or as one member of the public pointed out: the fact that he performed this mighty feat while wearing Adidas slides, which has resulted in this video going viral.

For reasons only known to this brave man he faced the creature and in that moment decided he was going to use his trash can to capture it.

The alligator was exploring the man’s front porch when he grabbed his trash can and maneuvered it so as to force the alligator inside.

Armed with nothing but an empty trash can, the man bravely approaches the roving reptile and manages to force him back so he has no option but to go inside the trash can.

The alligator responds by showing his jaws and snarling as he slowly shuffles back to try and avoid the open trash can. The fact that neither of them run away from the scene makes compulsive viewing.

Thousands of people have reacted to the video, which was posted on Reddit, where many have praised the man’s cool demeanor as he traps something that could easily have his leg off while others speculate whether the gator thought he was facing a ‘big blue hippo.’

Abdul even glances at the camera a couple of times as if he’s trying to capture an insect rather than a whopping great gator.

When the alligator is all the way in the bin, with just his tail hanging out and violently flapping around, Abdul props the trash can upright and flips the lid over the gator.

One person who commented on the video said: “The brilliant part is at 0.15 where he puts the lid down before the alligator is inside. Everyone thinks this puts the entire plan at risk because you can’t push an alligator through a closed lid. But somehow slamming his head with the lid and then going for the body does the trick.”

I can’t stop watching this video but can’t help wondering what happens next; where is the alligator now?

Please let us know what you think of this brave man’s actions in the comments section of our Facebook page and share this story.