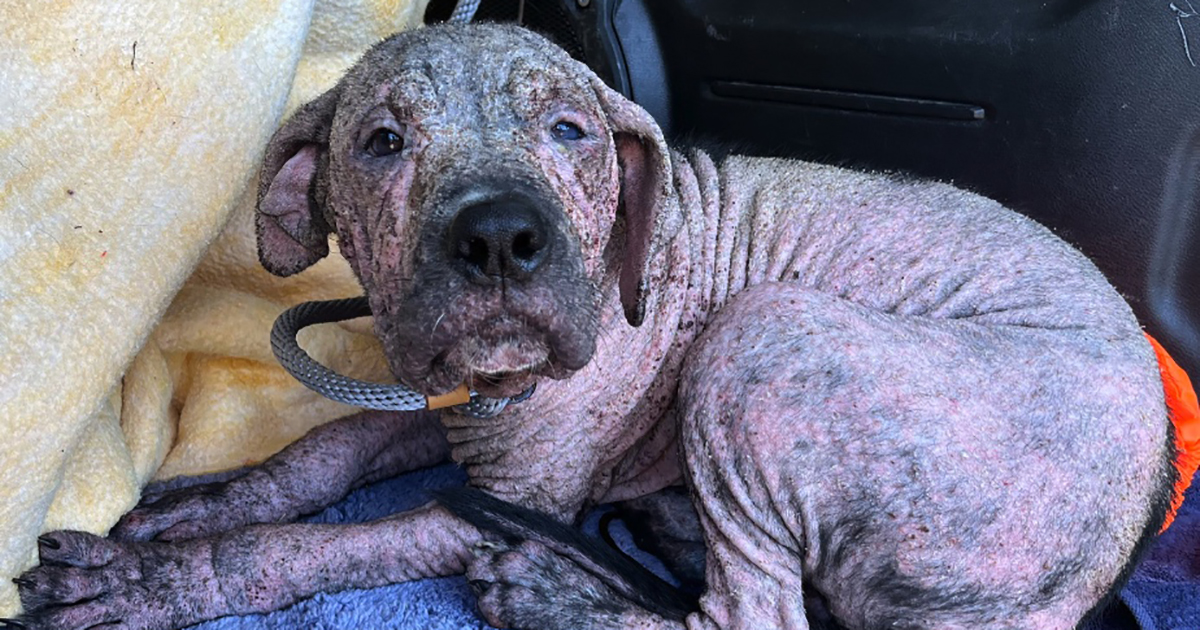 Staff members at a cemetery in Missouri weren’t too scared when they saw a shadow moving around in the darkness one night.

Four-legged visitors had started appearing here and there at times, trotting through the grounds.

A closer look in the light of the next day revealed the figure to be a small stray puppy.

When workers noticed that he was missing most of his hair and that his paws appeared too raw to comfortable walk on, they called some experts they knew at Stray Rescue of St. Louis (SRSL).

Donna Lochmann is the chief life-saving officer at the SRSL. While speaking with The Dodo, Donna explained:

“They just get under the fence and decide that they like it because it’s quiet. It’s a huge cemetery, so they have a lot of space to get away from people.”

Lochmann and the cemetery employees came together to devise a plan to catch and treat the stray puppy. First, they began a search of the grounds to locate the dog. Eventually, one worker found him resting under a bush after hearing some noise coming from the area.

Lochmann brought the puppy to a vet to help treat his skin and paws. The puppy was named Kamper after a name on one of the tombstones where he was found.

Once Kamper was healed, Lochmann and co-workers decided to bring the puppy back to his rescuers for a visit at the cemetery.

“It was really emotional for everyone,” Lochmann said, “especially for Kamper and the volunteer who called us.”

Kamper immediately and excitedly ran at his rescuers, licking their faces and jumping from person to person.

The cemetery workers were clearly sharing in the dog’s happiness, as well.

“The woman who called was so happy that we’d gotten him and that he was doing so well,” Lochmann said. “On our end, we certainly appreciated that she’d contacted us so that he could get some help.”

After his reunion with his saviors, Kamper returned to SRSL. Thankfully, he was not there for too long.

The puppy was almost immediately placed with a doctor’s family. He received medicated baths and pajamas to continue healing his skin, and the young dog also gets to play with many other dogs of various ages at the home.

“It’s so fun to watch him play and be happy, knowing that he’s not this scared, sick dog trying to survive on the streets anymore,” Lochmann said. “Now he gets to just be a puppy.”

In September, Kamper left for a foster home and we wish him the best of luck in the future!