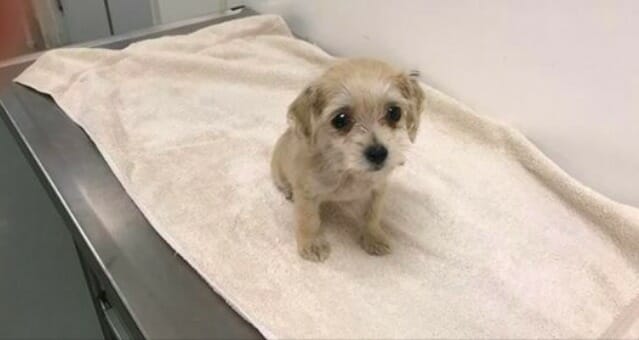 Vile, unthinkable incidents occur to animals daily. They make me wonder what is wrong with this world.

Unfortunately, one such incident is being reported out of the United Kingdom. And to make matters worse, it includes a barely 8-week-old puppy.

A sweet, tiny eight-week-old puppy was discovered dumped in a lady’s purse dangling from a charity shop’s door in London, UK. But that’s not the worst of it: its small legs were cruelly bound together with an elastic band.

Thankfully, a passerby discovered the handbag and promptly brought the puppy over to the RSPCA, a large UK-based animal welfare organization.

Upon inspection by a vet there, the assessment was simple: the very young puppy could easily have died.

Later named Radley, the puppy had had his circulation hindered by the elastic band tied tightly around his legs.

Outside the purse was a note saying simply “found this puppy”, and inside the animal rescuers discovered an unopened can of dog food alongside the little dog, thought to be a border terrier cross.

Thankfully the puppy is now faring well, aside from the obvious trauma he has suffered and some digestive problems, according to the RSPCA.

Most shocking however is the puppy’s young, tender age.

“We have come across similar cases but it’s concerning to see how young the puppy was,” an RSPCA spokesperson said, adding: “Normally dogs have to stay with their mother until they are eight weeks old, so he could have easily died in the cold if he hadn’t been found.”

The adorable little puppy is not available for homing yet as he is still being treated and checked at the animal clinic. He will be moved to one of the organization’s animal shelters as soon as he is good to go — and I can imagine that once there, he is bound to have a fan club!

Meanwhile, authorities are reviewing CCTV footage from the area and witnesses are asked to come forward to help apprehend the monster who did this to tiny Radley.

What a sweet little face! My only solace in this terrible story is that I am sure this sweet little puppy will recover from this nightmarish trauma and find loving parents who will give him all the love and care he deserves for the rest of his days.

I have no idea who or why someone would do such a terrible thing! But I sure hope they are apprehended and justly punished.