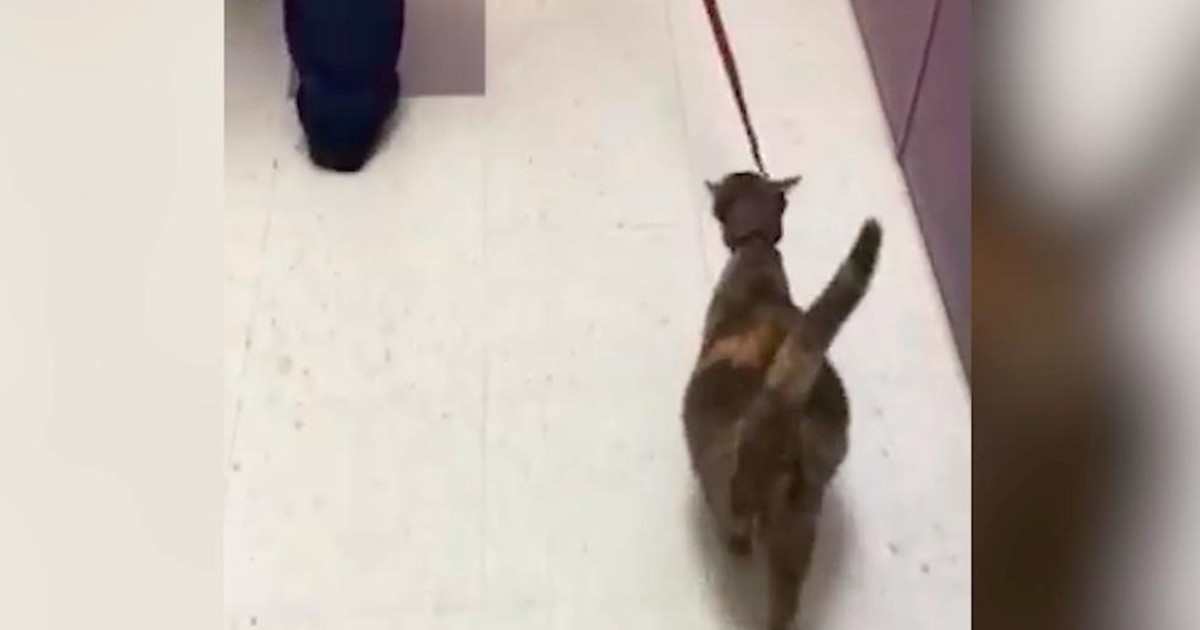 The area around Millersville, Maryland has many stray cats, but perhaps none quite like Chloe.

When she was brought to Anne Arundel County Animal Control (AACAC) in July, the 9-month-old cat was bursting at the seams and about to give birth. But she didn’t let the discomfort of being extremely pregnant in the heat of summer hold back her cheerful attitude. Instead, she took it in stride and delighted the staff there by walking on a lease like a puppy.

“She is so calm and personality-filled and followed shelter workers around like a puppy,” Chris Collins, a volunteer with Friends of the AACAC, told The Dodo.

And that’s not her only puppy-like quality. Chloe also loves walking on a lease. “Except, unlike a puppy,” Collins said, “she did great on a leash!”

Although everyone at the shelter instantly fell in love with Chloe, they needed to find a home for her as quickly as posssible—because living at a shelter would be unhealthy for Chloe’s soon-to-be-born kittens.

“The shelter tries to get pregnant cats or those with nursing kittens into foster homes as soon as possible to reduce the risk that they will get ill,” Collins told The Dodo.

But that process proved to be a little more difficult in Chloe’s case. As with all newly admitted cats, Chloe was tested for feline leukemia virus (FeLV) and feline immunodeficiency virus (FIV)… and her initial results gave everyone a scare.

After being turned down by a few places that sometimes take FeLV positive cats, the AACAC was at a loss. So with time running out, they brought Chloe to a local animal hospital to give her a more sensitive FeLV test. And to everyone’s relief, Chloe’s test result came up negative!

Then on the night of August 9, Chloe gave birth to six kittens. Unfortunately, one of them had a birth defect and uickly passed, but the other five are all healthy and happy!

“Chloe is such a sweetheart,” Kim told The Dodo. “She loves people and has the cutest little combination purr/meow. She will let you hold her in your arms like a baby and truly just wants to love on people. She is being a very good momma to her babies as well.”

When Chloe’s babies are a little older, they, along with their mom, will be up for adoption at the Arundel County SPCA.

Thanks to the efforts of the AACAC and Kim, it looks like Chloe and her babies have a bright future. I hope they all get the lovely forever homes that they deserve soon! Share if you agree!