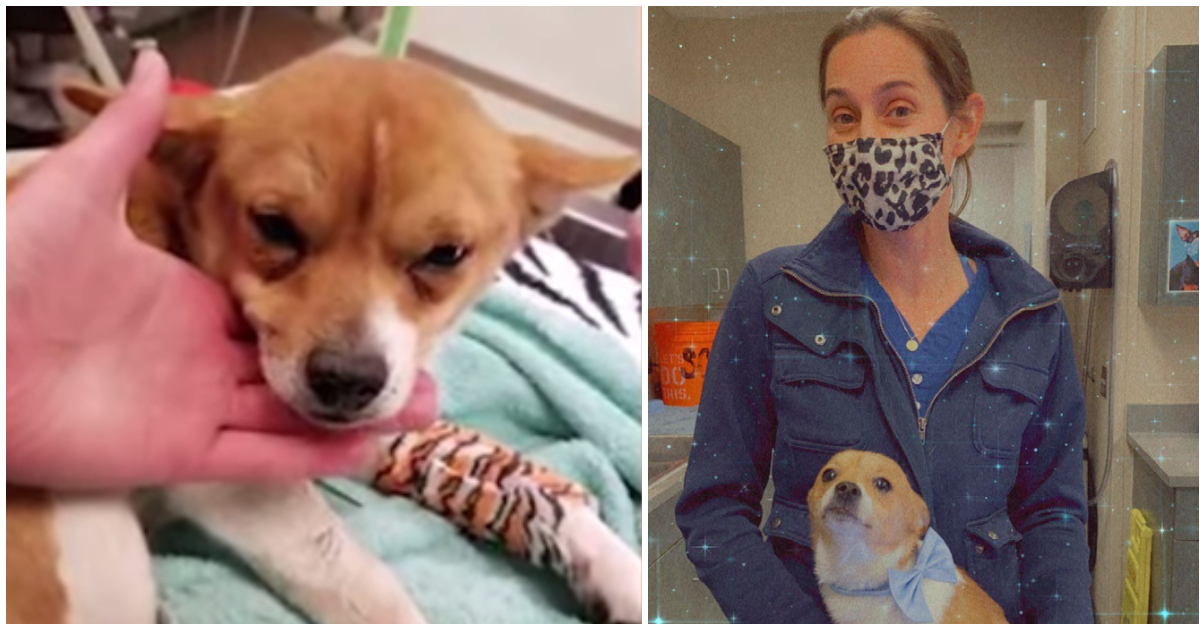 Veterinarians love all animals, but they have a special bond with strays and shelter pets. When an animal has no forever family of their own, a vet supplies the love and care they need.

And one vet had a very special bond with one of her patients… so much that she decided to make it official and adopt him!

The two best friends met in unfortunate circumstances: Jim, a Chihuahua mix, was struck by a car. After being found on the side of the highway, he was brought to the Humane Society of the Pikes Peak Region.

“From the minute I saw him, with a pelvic fracture and so sad, I just couldn’t believe how sweet he was despite all his injuries and pain,” Dr. Lynch said in a HSPPR blog post.

Jim was in bad shape after the car accident. After consulting Colorado Canine Orthopedics, the veterinary team gave him a surgery to fix his pelvis.

While the dog had to have his hind leg amputated due to nerve damage, he never lost his positive spirit.

Dr. Lynch took Jim in as a foster parent while he recovered, and continued to be impressed by the dog’s kind, brave personality.

After he was healed up, Jim was finally ready to be put up for adoption. But it turned out he already was home, after all: Dr. Lynch decided to adopt the dog herself!

It was clear the two had a very special bond, and after having Jim in her home, the vet knew it was meant to be.

My daughter was in love. My husband was in love,” Dr. Lynch told KRDO. “I couldn’t bring him back knowing I wouldn’t know what his future was going to be.”

Now, Jim is thrilled to be in his new home. He’s as happy and playful as any dog, refusing to let his previous injuries slow him down.

“He has an amazing temperament and he just follows me around all day,” Lynch said in the blog post. “I love him so much. My family loves him too!”

“It’s like nothing happened; he runs and jumps and plays with Elvita, my other dog. He’s the perfect fit for our family!”

How adorable — we’re so glad these two found each other. It’s clear they have a real, loving bond that will last forever.