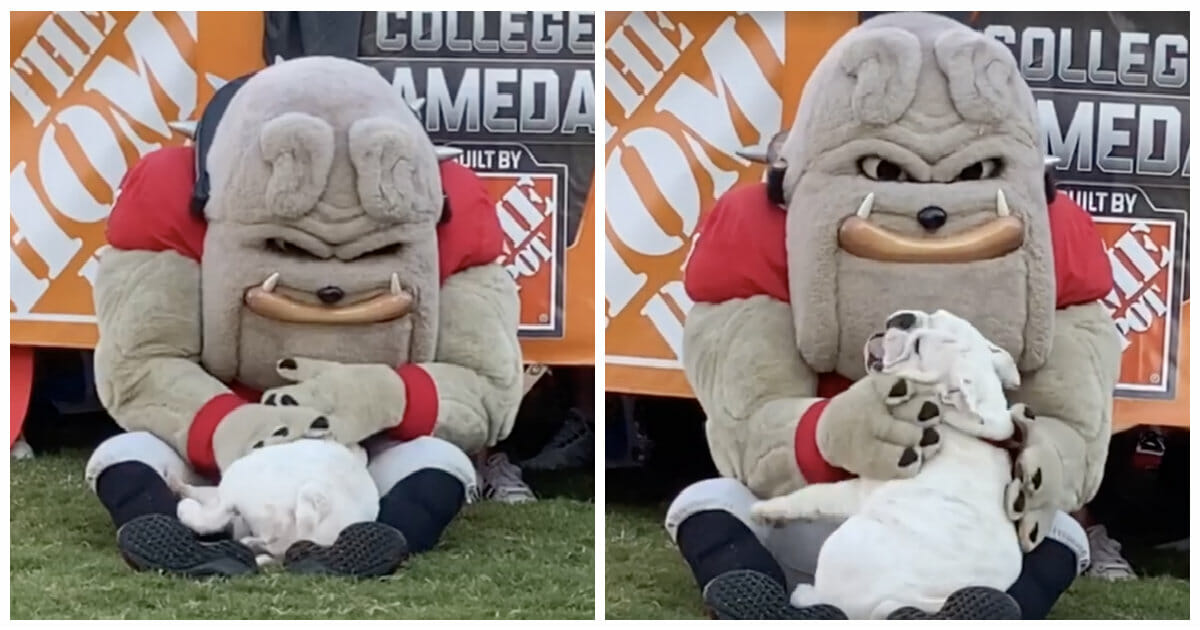 Sports mascots are a great way to get fans pumped up for a big game. A performer in a big costume takes to the field, leads some chants, maybe even shoots off a t-shirt cannon.

But it’s not just sports fans who are into the mascots. When a dog attended a recent college football game, he really saw himself in the team’s mascot… and viral video captured their precious moment together.

The University of Georgia’s football team is called the Bulldogs, and they have a human-sized bulldog named Hairy Dawg, who can be seen at every game.

Martha Roelkey is a huge fan of the team, so it’s not surprising that she has a bulldog of her own as a pet: a puppy named Kirby.

Like his dog mom, Kirby became a big fan of UGA, but had a specific love for Big Dawg. It seems the bulldog recognized his own kind, even in the form of a giant human-sized mascot.

Posted by University of Georgia on Wednesday, 10 August 2016

So when Martha took the little dog to a game and Kirby spotted his hero, he went crazy with excitement—and ran right over to the mascot.

“He was in heaven,” Martha told The Dodo. “He just couldn’t get enough.”

Big Dawg, it turns out, was just as excited to meet the furry football fan, and sat down and pet and played with the bulldog:

“He thought he was a huge chew toy,” Martha said.

The adorable moment was captured by Georgia-based events photographer Blane Marable. When he posted the video online, it went viral with over six million views on Facebook.

They played for several minutes,” he told The Dodo. “You could see the pup was trying to lick his face underneath the mask. It was quite cute.”

He’s happy to see the precious moment he captured has done so well, and brightened people’s day.

“It brought a lot of happiness,” Marable said. “If it brought a smile to somebody’s face, then it was worth it.”

Spread the happiness by sharing this adorable story!