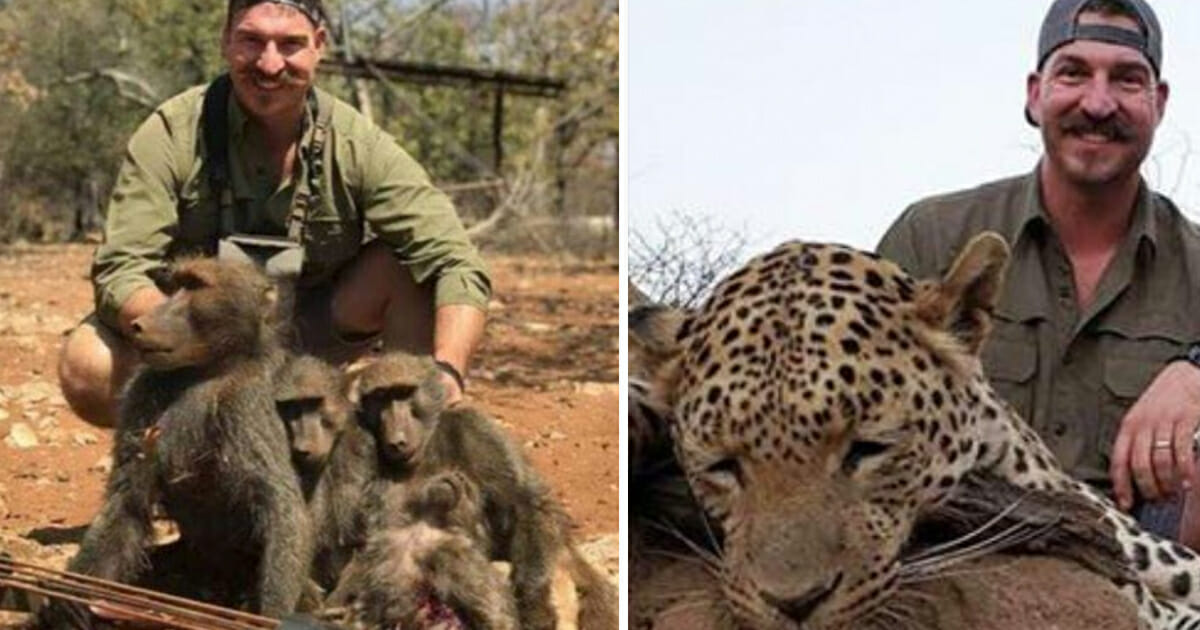 When will humans ever learn? Despite the multitude of horror stories, despite the numerous campaigns to place bans on trophy hunting, there are still those who go out, shoot wild animals and pose proudly for pictures with their corpses.

The latest to try his hand at boasting after gunning down helpless animals is the Fish and Game commissioner of Idaho, Blake Fischer. He shared photographs of himself smiling with a “whole family of dead baboons” he’d killed during a hunting trip to Africa.

As per the Idaho Statesman, he’s now facing calls to resign after sharing the hunting trip photos with more than 100 friends and colleagues.

Going by the photos he sent in an email – obtained by a newspaper through a public records request – Fischer and his wife shot at least 14 animals in Namibia, including a giraffe, leopard, impala, sable antelope, waterbuck, kudu, warthog, gemsbok and eland.

Reports claim Fischer also boasted in the email about how he’d killed a family of baboons. He sent a photo of himself smiling with the monkeys, saying his wife wanted to watch him hunt since it was her first African trip. “I think she got the idea quick,” he continued.

Former Fish and Game commissioner Fred Trevey, who served in the role from 2007 to 2015, was amongst those calling for Fischer to resign.

“I’m sure what you did was legal, however, legal does not make it right,” Trevey wrote in an email obtained by the Idaho Statesman.

“… Sportsmanlike behavior is the center pin to maintaining hunting as a socially acceptable activity.”

He later said: “… I have a difficult time understanding how a person privileged to be an Idaho Fish and Game commissioner can view such an action as sportsmanlike and an example to others.”

Meanwhile, Steve Adler of Idaho for Wildlife – a pro-hunting group – said: “The biggest thing is the baboon thing. I was really troubled. That’s my biggest issue. He killed the whole baboon family and you’ve got little junior laying there in mom’s lap. You just don’t do that.

“I hate wolves as much as anyone, but I’m not going to take a wolf family and put it on display and show the baby wolf,” he said.

Despite the backlash, however, Fischer said that he would not be apologizing for the hunt.

Idaho Fish & Game Commissioner Blake Fischer went to Namibia, murdered at least 14 animals, including an entire family of baboons, a giraffe & a leopard, then boasted about it online with pics (graphic). Several former Commissioners demand his resignation https://t.co/ePrnhBrbNw pic.twitter.com/Iw4LoPB1X4

What do you think of Blake Fischer’s actions? Did he go too far by posing with the family of baboons? Was he within his rights to do so?

Let us know what you think in the comments box below. Share this article if you want to stop trophy hunting once and for all!