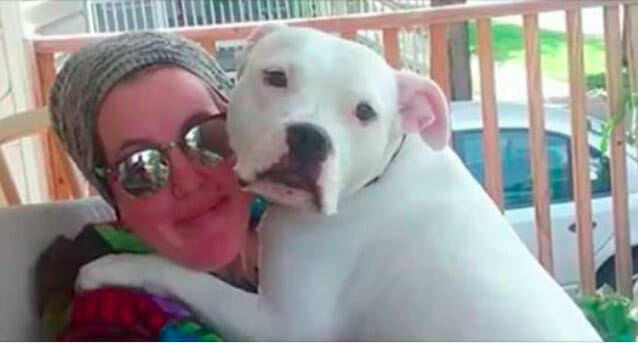 Buying a dog is a big decision that follows you for a long time. Even though it is incredibly rewarding to have a dog, it also requires a lot of responsibility. Owning a dog is almost like having kids.

Certainly, dogs can be left alone for some time, especially as they grow older. But they still need to be walked, fed and played with to be healthy and happy pets.

Some dog breeds are quite easy-going and do not need to be out so much, while others require several hours of play and exercise a day.

Unfortunately, not everyone understands just how much responsibility it is to acquire a dog. There are therefore dogs who only remain with their new owners for a short time before they’re sadly abandoned.

Some of these dogs may have even been neglected or abused which could mean even longer amounts of time before they acquire a new loving home.

When Kelly decided to get herself a dog, she made a wonderful choice: to adopt one that had been abandoned. She soon fell in love with a white pit bull named Rocco.

Kelly had been told that Rocco had only lived with her former owners for a few months, but had spent very little time actually getting to know them — they were always absent.

When Kelly saw Rocco, she knew right away that the two of them would be happy together.

But when she picked up the pit bull, it did not take long before she began suspecting something was very wrong.

As they sat in the car on their way home, Kelly noticed that Rocco smelled particularly bad. The stench became so bad that she had to stop and check what it was.

When she removed Rocco’s harness, she saw a deep and long cut across the dog’s chest. She immediately brought Rocco to a veterinarian to examine the wound. Luckily, it was possible to treat, but Kelly wanted to get to the bottom of what had happened to her dog, writes Dog Heirs.

When she called the person she bought Rocco from, they promised that the former owners would be responsible for the veterinary costs. But it was not the money that was important to Kelly.

She did not understand how anyone could treat a dog so badly and wanted them to be punished for what they did — so she picked up her phone and called the police.

The former owners were eventually found guilty of neglect and fined $1,500.

Watch a video of Rocco below:

Animals should never be treated badly. I’m so glad Kelly put her foot down and pushed forward to get justice for Rocco.

Share this article with your friends if you agree that dogs are man’s best friend!