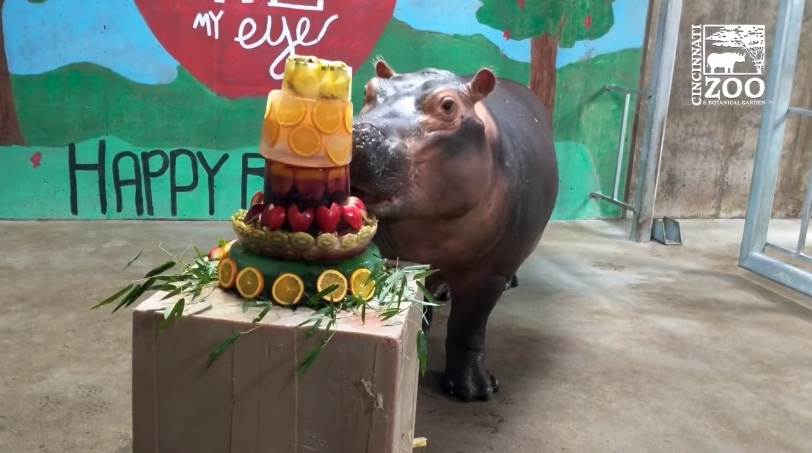 There are few animals as famous as Fiona, the Cincinnati Zoo’s beloved hippo.

Fiona has been making headlines her whole life: on January 24, 2014, the hippo was born six weeks premature, and her miraculous survival made her an instant celebrity.

Since then she’s become the face of the Cincinnati Zoo, starring on popular web shows and even becoming the subject of two children’s books.

Fiona is so popular that when her fourth birthday rolled around this month, fans around the country wanted a way to celebrate.

Since the coronavirus pandemic prohibits any kind of large celebration the zoo might’ve thrown, they found another way to mark the occasion.

The Cincinnati Zoo let fans buy apples for Fiona online. And in a special twist, the apples were marked with numbers and put into a “slow-paced race.”

In the event, dubbed “Float4Fiona,” the apples were placed in the water Hippo Cove, and the first apple to get through a Fiona mouth would win its owner a chance to have a meet-and-greet with Fiona!

“We can’t invite people here to witness the race, but we will stream it live on Facebook and announce the winners as the apples cross the finish line,” said Cincinnati Zoo director Thane Maynard in a press release.

The event was livestreamed on the zoo’s Facebook page. You can watch the thrilling conclusion here:

It was a fun way to keep fans involved and allow them to support the zoo while social distancing is still in effect.

Fiona fanatics also have the opportunity to buy special merchandise created for the hippo’s birthday: local businesses made Fiona her own beer, cookies and ice cream, while the zoo will sell new limited-edition Fiona merch.

“Since she is the sweetheart of the city, several Zoo partners are offering Fiona-themed goodies to celebrate her birthday,” Maynard explained.

Which is all well and good for Fiona’s fans, but what about the famous hippo herself? What did she get for her birthday?

Well, the zoo made her a very special birthday gift: a giant cake, all made out of her favorite hippo-friendly fruits like apples and oranges. A mural in the background wishes her a happy birthday, and says “You’re the apple of my eye.”

And it’s very clear that Fiona appreciated her gift — she didn’t hesitate to chow down on her cake:

Fiona often makes the news thanks to events at the zoo. For instance, this time last year she correctly predicted the Kansas City Chiefs would win the Super Bowl, in an adorable albeit slightly gross way.

And other times Fiona goes viral for reasons that were completely unplanned, like when she accidentally photobombed a couple’s engagement photo:

Happy birthday, Fiona! Thanks for always entertaining us over the years! We hope you enjoyed your cake!