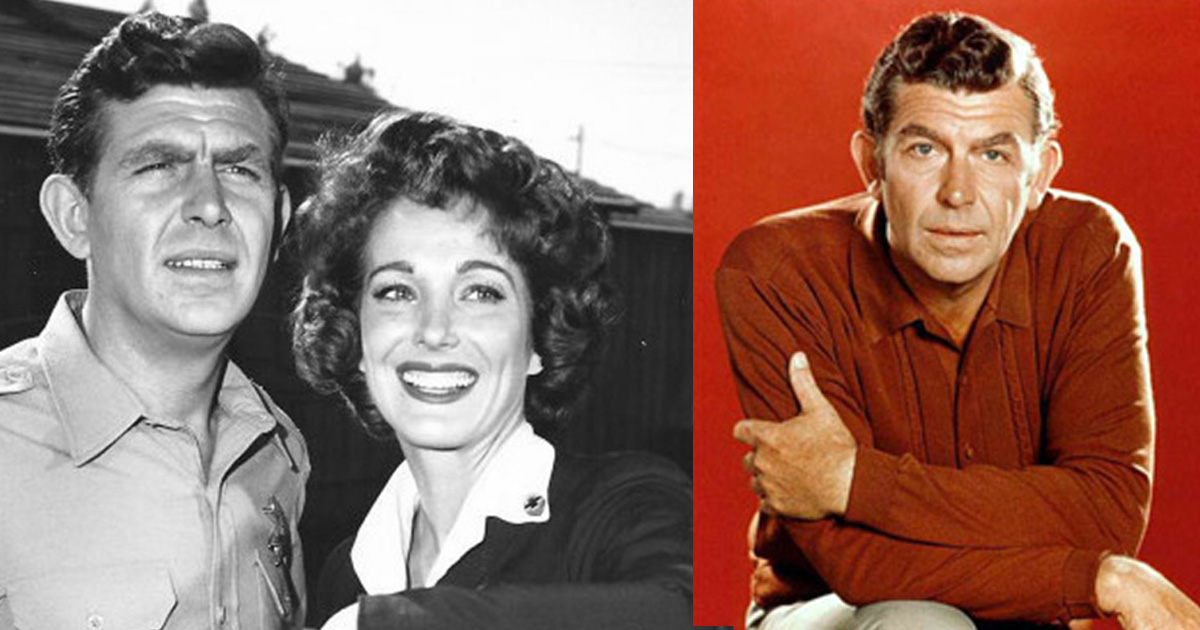 The Andy Griffith Show boasted a great cast of characters and always shared a good moral/ethical message for kids and adults, something I think that’s lacking in the majority of today’s shows.

Few aspects of television have impacted family culture as much as characters Andy Taylor, Barney Fife, Opie, and their idyllic American town of Mayberry.

I loved the show and still watch the reruns – every time I see an episode I’m struck by what a wonderful actor Andy Griffith was. His portrayal of the small-town sheriff Andy Taylor was really something special.

But it was far from certain that Griffith would become a legendary actor … his early life was marked by uncertainty and poverty.

Andrew Griffith was born on June 1 in Mount Airy, North Carolina. The city, located on the foothills of the beautiful Blue Ridge Mountains, would probably be considered by many as an American idyll.

And yet Andy’s start to life was anything but a fairy tale. When he was born, his parents had no home and his family were forced to live with friends. His mom and dad were extremely poor and Andy was forced to stay with relatives until his father could afford to buy a house.

When he was just three, his father got a job as a carpenter and could finally afford to buy a home in Mount Airy’s working district.

Andy himself was fascinated by music early on, and listened a lot to records and radio. But he was also a shy boy, hardly helped when he realized that he was born ”on the wrong side of the tracks”.

As he got older, his classmates realized that Andy was a special person with a unique ability to make his fellow humans laugh. When he himself started to appreciate it, Andy grew in confidence and slowly came out of his shell.

“I was being laughed at. I hated it, so I made an adjustment to control the situation. All comics learn that,” Andy said later on in life.

The turning point came when Andy and one of his friends were to sing in a local school program, in third grade. It transpired that his friend backed out at the last minute, so Andy was left alone on stage when the curtains were drawn.

After a split-second of nervousness, Andy started singing “Put on Your Old Gray Bonnet” and the audience went wild. Since that day, Andy knew he was destined to be on stage performing.

Andy, raised as a Baptist, loved swing, and had a great idol in a local pastor who played in a brass band. The pastor, Ed Mickey, was a supportive person who made sure that Andy was given an outlet for his talents.

In the mid-1950s, Andy got his first breakthrough, as a monologist. He delivered long stories such as his homespun comedy bit “What It Was, Was Football”. The story was told from the point of view of a naive pastor who watched a game of football.

When the monologue was released as a single, it climbed the charts and Andy’s path to celebrity status lay open. After a few minor TV roles, he landed a part in the series that would largely characterize Andy’s life: The Andy Griffith Show.

Playing Sheriff Andy Taylor, it was thought that Andy would be the comedic lead in the series since it was his show. One of Andy’s best friends, Don Knotts, would be the straight man.

But as things turned out, they both realized that it was best to change roles.

“Andy was the world’s greatest audience for Don,” Ron Howard, who played Opie, told Fox in 2018.

“Don had Andy literally in tears once a week. [I learned] about the spirit of collaboration, which I’ve carried with me forever.”

The TV series and the inhabitants of the fictional town named Mayberry became very famous and popular for the way they maintained the strict, moral code of the 1950s and 1960s. Aired in 1960, the show was still the number one show on television when it ended eight years later.

“People walked away from a simple life we had in the ’20s and ’30s, and I am glad that I am able to touch that period in our lives with the shows that I do and with the music that I do,” Andy said.

He never won any awards for his role in the series (unlike Don Knott’s and Frances Bavier), but he was ranked at number 8 in the TV Guide’s list of “50 Greatest TV Dads of All Time”.

After Andy left the show, he decided to take further steps in his career and started the production company Andy Griffith Enterprises.

”I wanted to prove that I could play something else, but there were 249 episodes out there of ‘Mayberry,’ and it was aired every day. It was hard to escape,” he said.

In 1986, he once again won the hearts of the TV audience when he portrayed Ben Matlock, a country lawyer who always won his cases, in the popular series “Matlock”.

Andy Griffith was married a total of three times in his life. He first tied the knot with Barbara Bray Edwards, in 1949.

Andy and Barbara, a soprano, met in college when they were both studying music at the University of North Carolina. They would later adopt two children: a son named Sam and a daughter named Dixie.

After 23 years of marriage, Andy and Barbara divorced in 1972.

Then, only one year after his divorce from Barbara, Andy remarried – this time to the Greek actress Solica Cassuto. Their marriage lasted for eight years.

Andy’s last wife, Cindi Knight, stayed with her husband until his tragic death in July 2012.

Andy’s son, Sam Griffith, worked as a real-estate developer but was found dead in 1996 after several years of alcohol abuse. He was only 37.

It was rumoured that Andy took his son’s death very hard and that it changed him. Sam’s lawyer, James Blatt, described Andy as ”quite upset” when he got the news.

A couple of years ago, Andy’s second child, his daughter Dixie, further confessed that Sam’s death took its toll on her dad.

“It affected my dad on a very, very deep level,” said Dixie. “I went to my brother’s funeral service, but my dad wasn’t able to go. There would be too many magazines and cameras, and it just wasn’t a good place for him to be.”

Dixie could see how fame affected her father up close. He always worked and was careful with his private life – he didn’t let many people get close to him.

“So many people wanted to be a part of him. It goes back to the time when his show was on. It was such a sweet show, representing Americana at its best. We long for that in a way — the easier times, the gentler times,” Dixie told The Denver Post.

But within the family he was a different person. Dixie described her father as a very “hands-on” person who was always fun to hang out with.

“My dad was fiercely protective of us. I respected his privacy all my life. I have kept a pretty low profile, which I still plan on doing,” she said.

And just as we suspected, her father was a wonderful person – especially when he was around his grandchildren.

”He was so cute. I loved his adorable Southern accent. He was so generous, and he spoiled us,” one of Dixie’s daughters recalled.

Andy Griffith’s own health problems began in 1983. He was then diagnosed with Guillain-Barré syndrome, a rare neurological disorder that made it impossible for him to walk. For seven months, Andy was paralyzed from his knees down.

Later, he also underwent a quadruple heart-bypass surgery and hip surgery. He was sick for years before he passed away in 2012 following a heart attack.

Griffith, a North Carolinian through-and-through, passed away with his wife Cindi at his side, at their costal home in Manteo, NC.

“Andy was a person of incredibly strong Christian faith and was prepared for the day he would be called Home to his Lord,” Cindi said.

I personally think country singer Brad Paisley summarizes perfectly what Andy Griffith meant and how we should look at his life.

“An actor who never looked like he was acting, a moral compass who saved as many souls as most preachers, and an entertainer who put smiles on more faces than almost anyone; this was as successful a life as is pretty much possible,” Paisley told CNN.

“Andy Griffith made the world a better place, and I was so proud to call him a friend.”