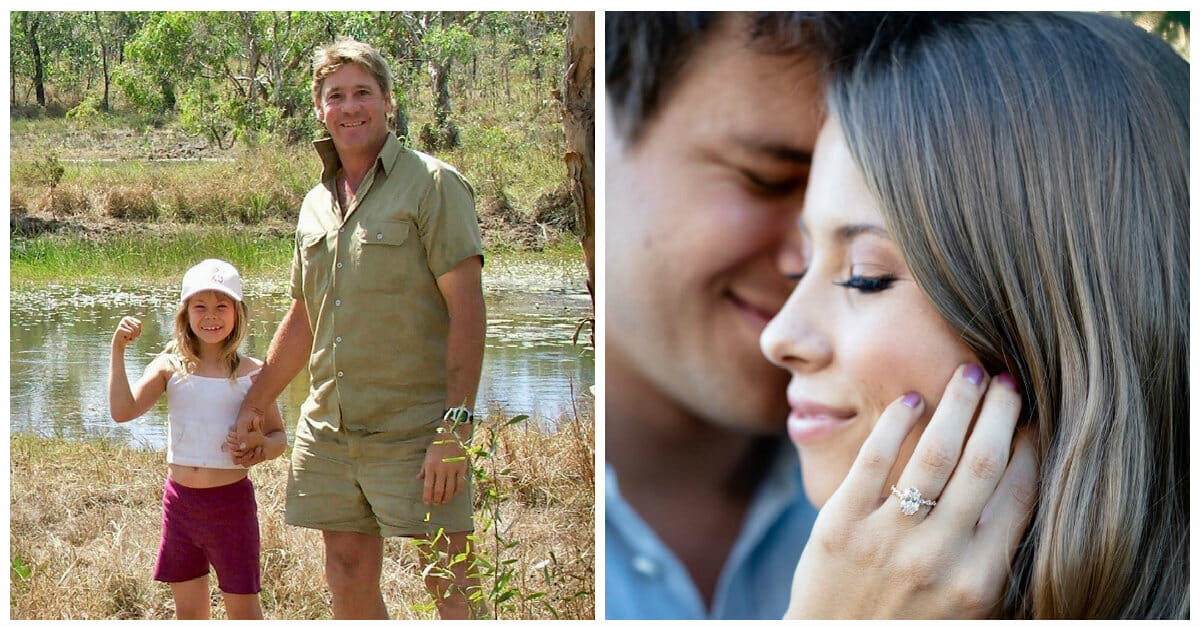 Bindi Irwin, the conservationist and television personality who has taken up the mantle of her late father Steve Irwin, revealed yesterday that she got quite the gift for her 21st birthday…

July 24th 2019 ❤️ On my birthday I said ‘yes’ and ‘forever’ to the love of my life. Chandler, close to 6 years ago I fell in love with you and every day since has been a whirlwind of adventure and true happiness. I’m so looking forwarding to spending our forever together as your wife. Here’s to a lifetime of friendship, purpose and unconditional love. — Now let’s get married already!

On July 24th, Bindi got engaged to Chandler Powell, her boyfriend of six years. Chandler is from Florida, but met Bindi by chance in 2013 when he was a professional wakeboarder, visiting Australia for a competition.

“It just so happened that Bindi was giving tours that day,” he told People. “I’m like, ‘Wow she is amazing.’” The two have been going strong ever since.

“Close to 6 years ago I fell in love with you and every day since has been a whirlwind of adventure and true happiness,” Bindi wrote on Instagram. “I’m so looking forwarding to spending our forever together as your wife. Here’s to a lifetime of friendship, purpose and unconditional love.”

She said YES! ❤️? Almost 6 years ago we met at Australia Zoo. I immediately fell head over heels for her kind and thoughtful heart that radiates so much light. Proposing in her very favorite place in the zoo, surrounded by animals, seemed like the perfect way to embark on this incredible new chapter in our lives. Bee, I love you more than anything in this world and I always will. Happy Birthday.

Chandler surprised his future wife by proposing to her at her “favorite place” in the Australia Zoo, which is owned by Bindi’s mother Terri.

“After Bindi’s birthday celebration at Australia Zoo, we had a photoshoot organized to celebrate her turning 21,” Chandler told People. “Just before we started the shoot, I took her to a special part of Australia Zoo to ask the girl of my dreams to become my wife.

Bindi shared details about the engagement ring. It contains a lab-grown diamond and is made from rose gold recycled metal.

“Chandler was incredibly thoughtful when he chose it, the ring captures the essence of who I am (with its vintage flare) and our life together, with the twisted band and scattered diamonds,” she wrote on Instagram.

The most beautiful surprise. Chandler and Robert worked together to capture the moment I said ‘YES’. We were in the gardens of Australia Zoo and it was beyond perfect. I never even knew Robert was there photographing and I’ll always be grateful to have these special memories of the most amazing day of my life. ❤️

The world suffered a tragic loss in 2006 when Steve Irwin was killed after a stingray barb pierced his heart. His nature documentary series The Crocodile Hunter had made him a beloved celebrity around the world, and was renowned for his environmental and conservationist efforts.

Bindi was only eight when she lost her father. From a young age, she has followed in her father’s footsteps. She hosted the children’s nature show Bindi the Jungle Girl as a child, and has continued her parents’ wildlife conservation efforts. She donates 10% of her wages to her family’s charity, Wildlife Warriors.

“With our work with Australia Zoo and our non-profit organization Wildlife Warriors, every single day of our lives is spent continuing Dad’s legacy and making sure that everything he lived for and worked so hard for carries on into the future,” Bindi told LADbible.

Reflecting on this special moment. Holding hands and learning to walk in the heart of Australia… ❤️ I’m thankful every day for the unconditional love and support of my wonderful parents. My guiding lights, always.

Bindi also known for winning Dancing with the Stars in 2015.

Her brother Robert also recently made headlines for following in his father’s footsteps: he recreated a famous photo of his father, feeding the same crocodile 20 years later.

Bindi says that her fiancee Chandler also shares some qualities with her late dad.

“He loves wildlife and conservation and he has this strength,” Bindi told People. “Which is necessary when you’re jumping on crocs.”

“One of the first times Chandler came to the zoo I wanted to kind of test him,” Robert said. “So we had him feeding alligators and he did awesome. I’m very impressed. He’s great with wildlife so I approve.”

Sounds like Chandler is going to fit right in with the family. Congrats to this happy couple!

Best day ever! Chandler asked and beautiful @BindiIrwin said yes. I am so very happy, and I know Steve would be too. Congratulations!! pic.twitter.com/sN5sFnxZhI

Thank you for always teaching me to stand up for what I believe in. I’m incredibly blessed to be your daughter and I love you so much. ❤️

Congratulate Bindi and her family on the engagement! Share this story!