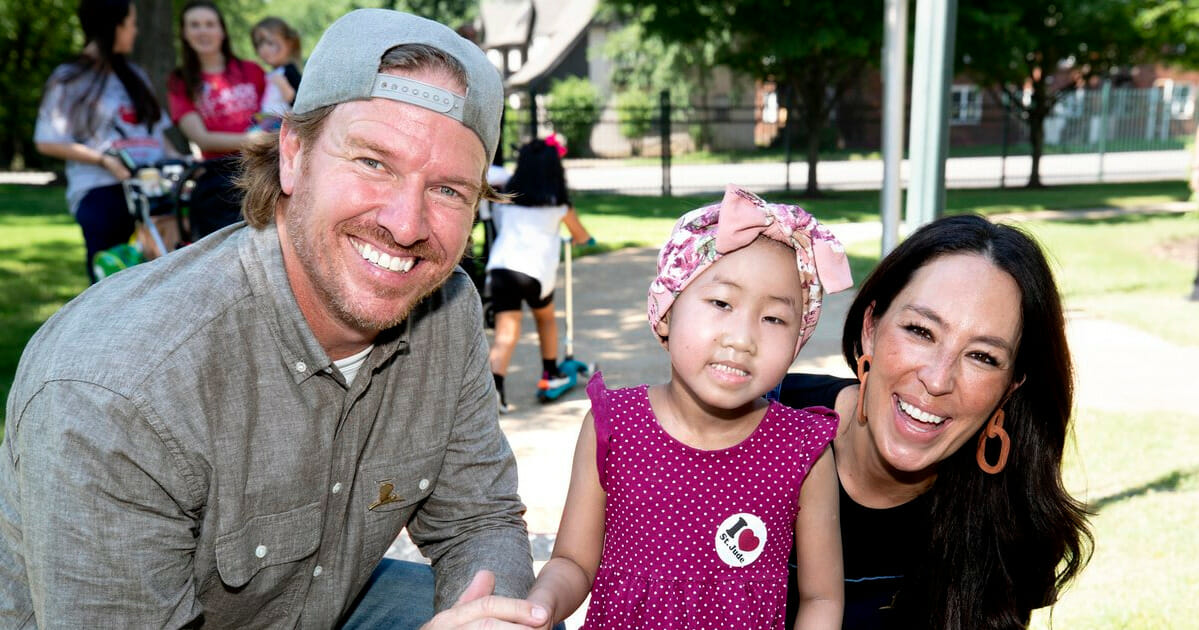 On their HGTV show Fixer Upper, Chip and Joanna Gaines made homeowners’ dreams come true by shiplapping old houses into farmhouse-chic dream houses. But offscreen, they’re making a huge difference for the people who need it most.

On June 19, the couple visited St. Jude Children’s Hospital in Memphis, Tennessee to deliver an amazing gift: a check for $1.5 million dollars. According to People, the Gaineses made a day of it, singing songs and reading stories to the young patients.

The optimistic spirit of their property flipping series was shared by the children fighting cancer.

“As we walked in today, a little boy told us that he’s ‘demo day-ing’ his cancer treatment and that’s pretty much the best thing I’ve ever heard,” Chip said at the event, according to People. “In our world, demo day marks the end of one chapter and the beginning of a newer, more exciting one.”

But that wasn’t the only surprise the Gaineses had in store. The couple put their home improvement expertise to great use by making a welcome addition to the hospital.

St. Jude is home to the Target House, a free housing complex for families staying at the hospital for more than 90 days. The Gaineses agreed the space outside the house could use an improvement, and decided to build a playhouse for the kids containing a play kitchen.

“There’s something so special about spending time together outside,” Joanna said. “While we’re hopeful that these families will not have to stay here for very long, we wanted to create a retreat for them to explore while they are here.”

The playhouse is surrounded by a gateway of colorful flowers. “We knew we wanted it to feel whimsical and fun,” Joanna said. “Our hope is that this space brings a bit of joy to the families here.”

But Chip and Joanna didn’t do it alone. Their contributions were the result of an online fundraising campaign that went far beyond their expectations.

On June 4, Chip unveiled on Instagram the “Chip in Challenge,” inviting people to make donations towards St. Jude online, encouraging that they donate under the name of someone they were “rooting for.”

So here's the deal, in 2017 we raised $230,000 for @StJude, and in return, I agreed to shave my head. We all came together for something big and what we were able to accomplish together was really special. We are heading back to St. Jude this year and I'd like to bring them an even bigger check! I'm calling in some favors and pulling together a group of people for what we are calling the #ChipinChallenge—Here's how it works: Go to chipinchallenge.com, select who you’re "rooting for" and donate under their name. Every penny we raise will go to St. Jude Children's Research Hospital, and it’s a fact that when we all chip in towards one goal, nothing can stop us. We've got till June 11, so spread the word!

According to People, the campaign got the attention of major celebrities—including Jennifer Lopez, Alex Rodriguez and Kacey Musgraves.

The fundraising mission hit close to home for Chip. When his friend and marathon trainer Gabe Grunewald entered end-of-life care, he encouraged his followers to hit the $500,000 fundraising goal, promising not only to personally match all the donations made that day, but to also make an equal match towards the Brave Like Gabe foundation.

More than 10 years ago, my friend @gigrunewald was diagnosed with an extremely rare form of cancer. I understand that Gabe is not a patient at @StJude, but right now, she is fighting for her life. Cancer is ugly and it is mean and it doesn’t fight fair. This has gotten extremely personal.. so here’s what I’m going to do about it: I want us to hit that $500K mark by midnight tonight. So I will be personally matching all #ChipInChallenge donations made between now and midnight. ON TOP OF THAT, I'll also be matching that amount in the form of a donation to the #BraveLikeGabe Foundation, in Gabe's honor. That is 3x the power of your generosity in the fight against cancer.. and all YOU need to do is donate whatever you can to the #ChipInChallenge (link in bio) between now and midnight CT. I’ll take care of the rest. Together, we’re going to fight for those who are fighting for just one more day. This is for those precious kids at St. Jude.. we are pulling for you! And to my beautiful friend Gabe.. we love you and we are here for you every step of the way.

The campaign ran until June 11. When it was all done, Chip revealed on Instagram they had raised a total of over $2 million dollars—the $1.49 for St. Jude plus over half a million for Brave Like Gabe.

This wasn’t the first time the Gaineses raised money for St. Jude. They had a campaign in 2017—promising that Chip would give the people what they wanted by cutting his hair. The more money raised, the shorter his hair would go.

What an incredible experience at @StJude Children’s Research Hospital in Memphis this week! A big thank you to everyone who supported #OperationHaircut and rallied together for these kids. Because of YOU we were able to give a check to St. Jude for $230,092!

After that experience, the children of St. Jude left a deep impact on Chip, and he knew he would have to return for another round of fundraising.

“Those kids changed us—their joy, their hope, and playfulness in the face of their battle against cancer, there’s no way it couldn’t have,” Chip wrote on Instagram.

The #ChipInChallenge is for the brave kids at @StJude, for the ones just like Lizzy. ⠀ ⠀⠀⠀⠀⠀⠀⠀⠀⠀⠀ When @joannagaines and I visited St. Jude two years ago, those kids changed us—their joy, their hope, and playfulness in the face of their battle against cancer, there’s no way it couldn’t have. But you know that feeling you get when you meet someone who you feel connected to right away, like you’ve known them forever? For me, one of those people was Lizzy. She was magnetic: her curiosity, the way she talked and moved, the way she laughed.. it was angelic! She was absolutely captivating. After her courageous battle with cancer, Lizzy passed away in March of 2018. The #ChipInChallenge is for the brave kids just like Lizzy. Because I believe when we join together and ALL chip-in, even just a few bucks, we can save lives. If this just saves one life, if we just get one kid home to live happily ever after, it will all be worth it. Think about chipping in – and head to the link in my profile to see how you can help. Every one of these kids is worth it, and together we can change the world.

Chip and Joanna ended Fixer Upper in 2018, and are currently working on their own TV network.

But in the meantime, their kindness can be felt by the families staying at St. Jude.

“To see their faces light up as they challenge their friends to a game of lawn bowling or explore the new playhouse designed by the incredible Chip and Joanna Gaines—it’s truly unforgettable,” said Richard Shadyac Jr., president and CEO of St. Jude’s fundraising and awareness organization.

“We’re all so grateful.”

Their story shows how social media can be used to spread good. Be sure to share this story!