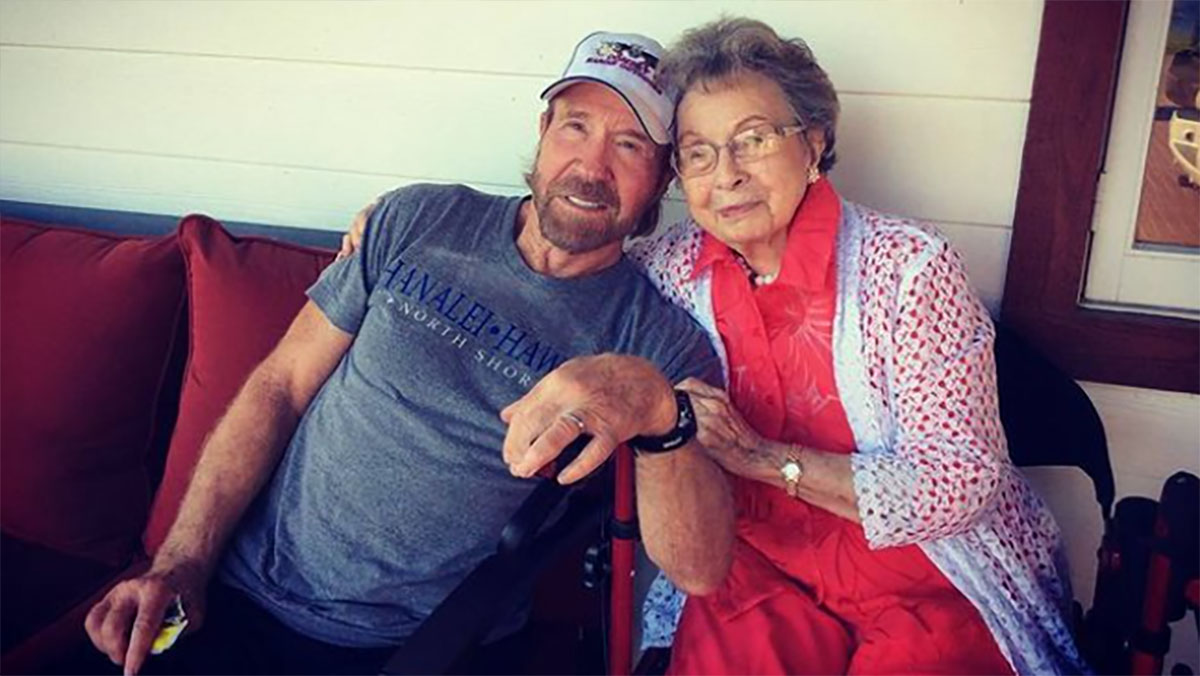 They say behind every great man is a great woman, but in the case of the legendary Chuck Norris, he’s lucky enough to have two great women to support him in life: his wife and his mom.

The 81-year-old acclaimed martial arts expert and actor is married to former model Gena O’Kelley and often gushes about her on social media.

In November the couple celebrated 22 years of marriage and he took to Instagram to share his thoughts about the woman in his life.

“22 years ago I became the luckiest man in the world when Gena and I got married,” he wrote. “Happy Anniversary my beautiful wife! There are no words to describe my love and appreciation for you. Thank you for sharing your life with me. I praise God for every day we are together.”

The Oklahoma-born father of five is also lucky to have another strong and supportive woman in his life: his mother Wilma Norris Knight, who celebrated her 100th birthday in May.

Norris often describes the tough life his mother has had, but throughout it all she has kept her faith and regularly prays for her eldest son.

The grandfather of 13 said his mother was diagnosed with a rare disease when she was just 8 years old and was confined to a children’s hospital for two years, away from her family.

Her family lived in severe poverty, and at just 10 years old she was able to leave the hospital but instead of going home to enjoy life again she had to help take care of her family during the Great Depression.

When she should have been going to school and playing she was forced to take on a number of jobs to help support her family in rural Wilson, Oklahoma, including picking cotton.

“When done picking one field, they’d often move to another town to pick another field. There was nothing easy about life in the Dust Bowl, especially during the decade of the Great Depression,” Chuck told WorldNetDaily.

She met Chuck’s father and they married when she was 16, but he then abandoned her leaving her alone with 3 boys.

“Mom has been an example of perseverance and faith her whole life,” Chuck told Christian Post.

“She’s also endured the deaths of her two husbands, a stepson, two grandchildren, and my younger brother Wieland in the Vietnam War. She’s had cancer repeatedly and has gone through roughly 30 different surgeries for a host of issues – and yet she’s still here to tell about it.”

Not only has prayer helped this strong mom get through the hardships in her life but Chuck credits his mom’s prayers for helping him.

“My mother has prayed for me all my life, through thick and thin.

“When I was born, I almost died from complications. When nearly losing my soul to Hollywood a few decades ago, she was back home praying for my success and salvation. She even prayed for me to find a woman to change my life, and it worked.”

Chuck also wrote, “I equally celebrate my wife, Gena, during this Mother’s Day week. Gena helps me run all my enterprises and is CEO of our new artesian bottled water company, CFORCE. But most of all she is the mother of our twins, the love of my life, and my best friend.

“I am overwhelmed with gratitude to God for these two incredible women’s influence in my life.”

Chuck is so lucky to have his mom still in his life at 81 years old, and what a mom she is! Such an incredible life she’s led — I’m glad that her son honors her the way she deserves.

Help us wish this wonderful woman a Happy 100th birth year by sharing this story.