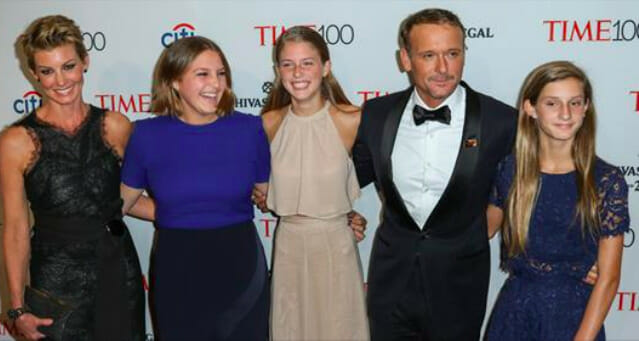 Faith Hill is one of country music’s most beloved stars. Whether in the spotlight or in her private life, the megastar has long had fans swooning with her charm and gorgeous voice.

But Faith Hill is remarkable for yet another reason: she truly values family life. In fact, Faith Hill and her long-time husband Tim McGraw have built one of the most well-known and beautiful families in country music.

The two talented superstars married in October 1996 — and haven’t looked back since. 22 years later they are the proud parents of three girls, Gracie, 21, Maggie, 20, and Audrey who recently turned 17.

Faith and Tim met while on tour. When they decided to tie the knot, they also pledged to never be apart for more than three consecutive days.

To the love of my life, the one who still takes my breath away after 22 years of marriage. My soul man, my soul mate, my everything. My one and only. Another 22 years is a good place to start. Happy Anniversary my love❤️

They now share three daughters, Gracie, Maggie and Audrey, but the parents have been careful to keep their children out of the spotlight as they were growing up.

Faith is not known to be especially active on social media, but makes a point of always acknowledging her girls’ birthdays. She recently did this with Audrey, her youngest, who turned 17.

I’m so happy to be mom to my 3 amazing girls. I am so thankful for my mom who taught me the most important things in life and how to set my priorities. #MothersDay

The beloved country music couple have previously opened up about the difficulties surrounding Audrey’s birth — she was born 8 weeks premature.

“Seventeen years ago, this little precious jewel came almost eight weeks early to us!” Tim wrote on Instagram. “So tiny, but so strong!”

“Our youngest daughter, Audrey, was born on December 6,” she said. “She was eight weeks premature, and we were finally able to bring her home the day before Christmas Eve.”

“So this time of year just feels extra-special to us. And now, every year, to celebrate Audrey’s birthday, we decorate the tree on the sixth,” she continued.

“It’s a little bit of a challenge, keeping a live tree fresh for the entire month of December. But there’s no other way we’d do it: We decorate on the sixth, and it has to be a live tree.”

Faith recently appeared with Audrey at the Versace Pre-Fall 2019 fashion show and the 17 year old looked like a splitting image of her mom — with dark hair.

In addition to the stark resemblance between mom and youngest daughter, just how much Faith doesn’t seem to age left many at the event in awe.

Best of all, though, is the clear bond these two obviously share!

What a wonderful family and bond this mom and daughter clearly share! Share if you’re a fan of Faith Hill, too.