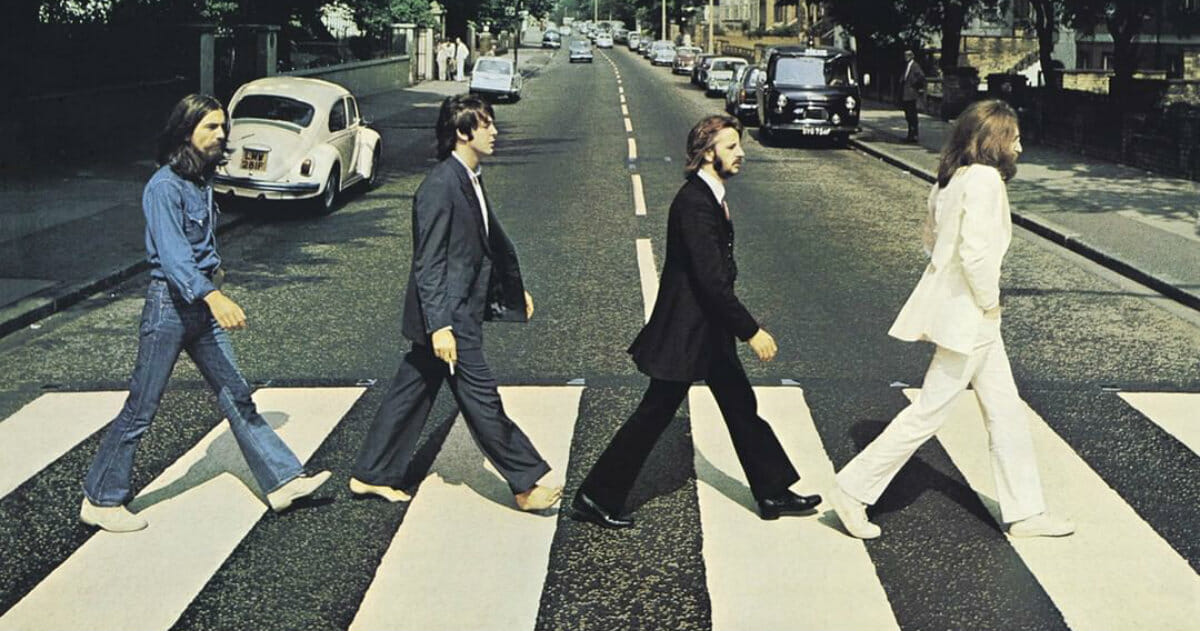 It’s one of the most famous images in all of pop culture, an instantly-recognizable icon of the most influential band in history. It’s spawned countless imitations and parodies, and created a tourist destination fans still flock to.

And it’s simply a photo of four guys crossing the road.

On this day 50 years ago, The Beatles posed for what became arguably the greatest of their many iconic album covers: the cover of Abbey Road, featuring John, Paul, George and Ringo walking across the zebra crossing outside their recording studio.

The Beatles were photographed crossing Abbey Road 50 years ago today, resulting in one of the most iconic album covers of all time. At the link in our bio, Rob Sheffield settles an age-old debate about the album. Courtesy of Apple Corps

The Beatles recorded Abbey Road, their penultimate album release and their last recording as a band, at EMI Studios on Abbey Road in London.

When it came time to take a photo for the cover, Paul McCartney proposed the idea of the four of them crossing the street outside the studio, an idea he sketched out. Photographer Iain Macmillan was hired to take the photo.

The actual photoshoot for the legendary photo was fairly short.

“[Macmillan] was given about 15 minutes,” Brian Southall, author of the history of Abbey Road Studios, told BBC. “He stood up a stepladder while a policeman held up the traffic, the band walked back and forth a few times and that was that.”

He only took six shots of the Beatles walking back and forth across the street. Paul chose the fifth—with the four bandmates walking across in sync—and history was made.

50 years ago today, @TheBeatles gathered at EMI Studios for one of the most iconic photoshoots of their career. A policeman held up the traffic as photographer Iain Macmillan, from a stepladder positioned in the middle of the road, took six shots as the group walked across the zebra crossing just outside the studio. Shortly after the shoot, @PaulMcCartney studied the transparencies and chose the only one where all four Beatles were walking in time. ⁣ ⁣ We take a deeper look into the story behind one of the most famous photoshoots in music history on the Abbey Road Blog: abbeyroad.com/news #AbbeyRoad

Unusual for the time, the album was released with just the photo—no album title on the cover, and no mention of the Beatles’ name.

“I insisted we didn’t need to write the band’s name on the cover,” John Kosh, then the creative director at Apple Records, said. “They were the most famous band in the world after all.”

Abbey Road was released that Fall. It was a massive hit, becoming the band’s best-selling album in the US. It frequently ranks as one of the best albums of all time, and gave us classic songs like “Something,” “Here Comes the Sun” and “Come Together.”

But the cover has taken on a life of its own. EMI Studios was renamed Abbey Road Studios in 1970, and the crossing was Grade II listed status for “cultural and historical importance.”

You can still find the cover on posters, and pretty much everyone has parodied the cover at some point.

Today, there are still tourists and fans flocking to the Abbey Road crossing, recreating the album for themselves.

“Every hour of every day there are fans on the crossing,” Beatles tour guide Richard Porter told AP News. “I’ve seen lots of different sights on the crossing, too, from couples having their wedding photos taken to people going across naked.”

So for the 50th anniversary, hundreds flocked to the site to mark the occasion. For this day only, Abbey Road Studios set up a backdrop so you can match the Beatles’ cover even more perfectly:

If you're planning on coming to the zebra crossing today and the queues are too long, step inside the Abbey Road car park for one day only and take your photo with the original Beatles' 1969 image! #AbbeyRoad pic.twitter.com/I8Dne7MJM8

According to NME, about 3,500 fans showed up on Abbey Road today to celebrate.

It was, needless to say, much more crowded and chaotic than it was 50 years ago, with plenty of Beatles impersonators posing for photos on the crosswalk.

For the 50th anniversary of the album itself, the band will release a deluxe edition of Abbey Road in September.

It’s hard to imagine another photograph, let alone album cover, that would inspire so much fanfare for an anniversary. It goes to show the impact the Beatles have had on pop culture that’s still going strong decades later.