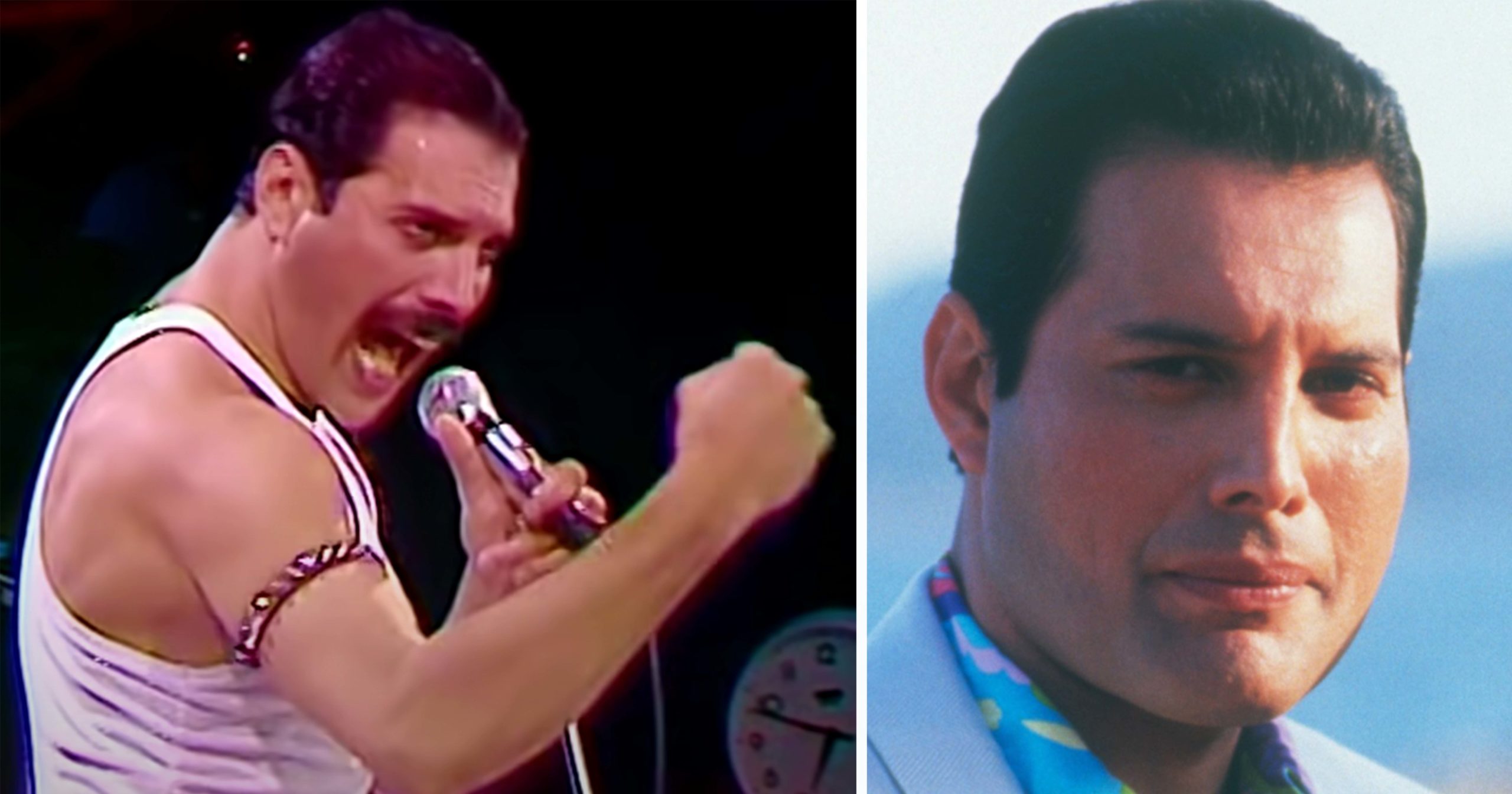 Freddie Mercury became one of the world’s biggest stars as the lead singer of Queen. The legendary performer had one of the best voices of all time, according to many fans. Unfortunately, however, he tragically passed away way too soon.

In November 1991, Freddie Mercury passed away at his London home, at age 45, an AIDS-related death. Now, new details about his last days alive are emerging.

In a brand new BBC documentary, Freddie Mercury: The Final Act, friends of Mercury’s, including Queen guitarist Brian May, recall their final moments with Freddie – and how he had prepared his passing.

Some say that true geniuses only appear once every 40 or 50 years. No matter if it’s scientists, painters or musicians, there genuinely aren’t many that you can call real geniuses, but in the end, they always made sure to leave a legacy more extensive than one can imagine.

When speaking about music, genius can appear in many different ways. Some can create music like Mozart, while others might be that person with a fantastic voice without making massive hits.

But one man who could do both was Freddie Mercury, the legendary singer in Queen. Freddie Mercury was born Farrokh Bulsara in Zanzibar on September 5, 1946. He was sent to a boarding school in Mumbai, India at the age of 8, where he first came in contact with music.

However, being sent off to another country at such an early age was tough on him.

“Of course, there were feelings of being sent away from my parents and my sister who I missed very much – feelings of loneliness, feelings of being rejected – but you had to do what you were told, so the sensible thing was to make the most of it,” Freddie said, as quoted by Express.

“I was put into an environment where I had to fend for myself, so I got a good grasp of how to be responsible at an early age, and I think that’s what made me such a fiend,” he added. “All the things they say about boarding schools are more or less true, about the bullying… One thing board school teaches you is how to be independent and not rely on anyone else.”

Mercury started playing the piano and joined the band The Hectics. Five years after arriving, he went back to Zanzibar. However, his time there wasn’t long, as the family moved to London, England, following a revolution that had the family in danger.

Why did Freddie Mercury name the band Queen?

In England, it didn’t take long before Freddie Mercury realized his extraordinary talent in music. He joined a blues band named Wreckage while studying graphic design courses at the Ealing College of Art.

By performing around the city, he soon met two people that changed his life. Roger Taylor and Brian May met Freddie while they were in the band Smile, playing around pubs in Middlesex, England. Freddie soon joined the band – and in 1971, bassist player John Deacon joined.

Not long after, the band changed their name to Queen. In his book Is This The Real Life? The Untold Story of Queen, author Mark Blake writes that Freddie Mercury suggested the name, saying that “it’s wonderful, people will love it.”

The band showed its great potential and signed with EMI Records and Elektra Records. Their debut album, Queen, was released in 1973 – and it didn’t take long before they began to conquer the world. In 1974, they had their first big hit with “Seven Seas of Rhye,” and a year after, the legendary “Bohemian Rhapsody” was released.

“I remember Freddie coming in with loads of bits of paper from his dad’s work, like Post-it notes, and pounding on the piano,” Queen guitarist Brian May said in 2008.

“He played the piano like most people play the drums. And this song he had was full of gaps where he explained that something operatic would happen here and so on. He’d worked out the harmonies in his head.”

Freddie Mercury revealed that the song was something he “wanted to do for a long time.” Further, he didn’t want to explain the song’s meaning and instead have people interpret it themselves.

Since its release, people have been debating and analyzing the lyrics over and over again. But Mercury didn’t want that at all as he wrote it.

“I think people should just listen to it, think about it, and then decide for themselves what it means to them,” he said.

“I don’t like to explain what I was thinking when I wrote a song, I prefer people to put their own interpretation upon it – to read into it whatever they like,” he added, saying it would be “awful” to do otherwise.”

“Bohemian Rhapsody” became a landmark, not only for Queen but for music history. The song was inducted into the Grammy Hall Of Fame in 2004, and readers of Rolling Stone magazine named Freddie Mercury’s vocal performance the best in rock history.

It’s safe to say that the song has been listened to plenty, as it’s the third-best-selling single of all time. And in 2018, “Bohemian Rhapsody” was announced as the world’s most-streamed song of the 20th century, with more than 1.6 billion listens across all major streaming services.

Queen continued their conquering of the world by releasing more music and many hits, bringing their music to the United States and Asia. Freddie Mercury was undoubtedly the main attraction, with his flamboyant personality and magical voice being out of this world.

In 1985, the band delivered one of their most legendary performances as they took the Live Aid stage, and a year later, they sold out the now-rebuilt Wembley Stadium in London.

But as Queen continued to create wonderful music and hits, their legendary singer passed away in November of 1991, a death that shocked the world.

Not many people knew that Freddie Mercury was dying after being diagnosed with AIDS. He decided to keep it a secret, telling the world about his diagnosis just 24 hours before passing away.

“It was announced before he died, but he did not want to be the object of pity or scrutiny, and within 24 hours, it was gone. It was probably perfect timing. Bloody good move, I thought,” Brian May recalled.

Mercury decided to hide his illness and instead spent the last two years of his life almost entirely in seclusion. Only the most trusted friends and family members visited him during his final weeks, the Queen band members with partners and Elton John, among others.

“He truly lived for others”

In his 2013 book Love is the Cure: On Life, Loss and the End of AIDS, Elton John shared his thoughts on the last years by Freddie’s side.

“He knew death, agonizing death was coming. But Freddie was incredibly courageous. He kept up appearances, he kept performing with Queen, and he kept being the funny, outrageous, and profoundly generous person he had always been,” Elton John wrote.

“As Freddie deteriorated in the late 1980s and early ’90s, it was almost too much to bear. It broke my heart to see this absolute light unto the world ravaged by AIDS. By the end, his body was covered with Kaposi’s sarcoma lesions. He was almost blind. He was too weak to even stand.”

“By all rights, Freddie should have spent those final days concerned only with his own comfort. But that wasn’t who he was. He truly lived for others.”

Mercury spent the last weeks of his life in bed. However, Peter Freestone, who was Freddie’s PA and dear friend, recalled an emotional moment when the legendary singer asked if he could be carried downstairs.

“Freddie was downstairs in Garden Lodge on November 20, as he wanted to see some of his artworks for one last time,” Peter recalled. “Terry carried him down the stairs, but he walked around the sitting room and Japanese room, with one of us supporting him.”

“He commented on how and when he had acquired a few of the pieces. Of course, there was a quiet atmosphere in the house during those last days, but Freddie remained the Freddie we knew until the end.”

Anita Dobson – wife of Queen guitarist Brian May – explains that Freddie had prepared for his passing for six months. Mercury chose to “slowly let go,” and he looked fragile and worn in the end. And his last heartbreaking words to her send shivers down the spine.

“I remember he said, ‘When I can’t sing anymore darling, then I will die. I will drop dead,” Dobson recalled in the documentary, as reported by Mirror.

Peter Freestone was Freddie’s assistant, and together with friend Joe Fanelli, he carried for the dying superstar.  During his final days, the drip was the only thing keeping him alive.

“Joe called me at about 5:30 am, and Freddie had basically gone into a coma, and we made Freddie sort of comfortable. You could see Freddie had moved a bit, and then as we were changing his T-shirt, we just looked and saw his chest had stopped moving.”

Freddie Mercury’s dearest friends knew they wanted to do something to honor him following his passing. So Roger Taylor – the Queen drummer – and Elton John started to call some of the greatest artists around: David Bowie, Annie Lennox, and George Michael, among others.

On April 20, 1992, The Freddie Mercury Tribute Concert for AIDS Awareness was held at Wembley Stadium in London in front of 70,000 people. Since it was also broadcasted, an estimated half a billion people around the world watched it.

“When George Michael sang ‘Somebody To Love,’ there were moments where he had that crystal clear razor-edge just like Freddie. It was a real ‘chills up your spine’ moment for all of us,” Brian May recalled in the new BBC documentary Freddie Mercury: The Final Act.

“Freddie lived for his music and loved his music, and he was proud of himself as a musician above ­everything else.”

Freddie Mercury will forever be remembered as one of the most outstanding performers, singers, and songwriters of all time. We miss you a lot, Freddie. May you always rest in peace.