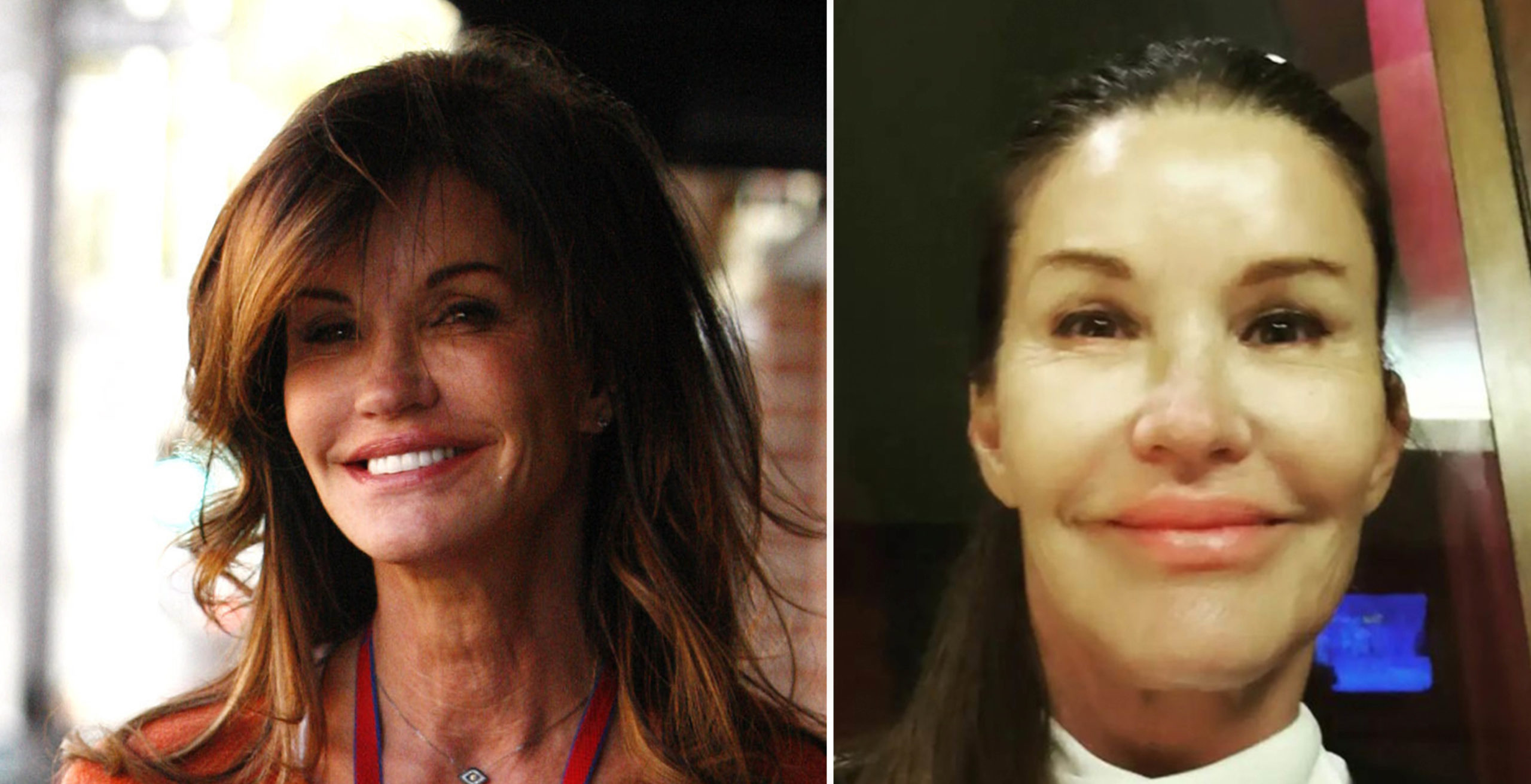 Janice Dickinson rose to fame as a worldwide superstar model. She proclaimed herself the “first supermodel”, and was one of the most popular models throughout the 1980s, working for some of the biggest brands around.

Dickinson achieved superstardom, and later became a judge on America’s Next Top Model, but her life hasn’t always been easy. In fact, she’s revealed that she had a very troublesome childhood, and in the 2010s even declared bankruptcy.

Moreover, Dickinson has been known to have done a lot of plastic surgery, with one expert even claiming that she’s had “every plastic surgery there is.” Here’s all you need to know about the former supermodel – and what she’s up to today.

Janice Dickinson was born on February 15, 1955, in Brooklyn, New York. Her parents and siblings moved to Hollywood when she was very young, though Janice has admitted herself that theirs was a very dysfunctional household.

“My dad was Scots-Irish, my mum was 100% Polish and I was the middle child of three girls. My mother was a nurse and she worked very hard, my father was in the navy,” Dickinson recalled.

“We moved from Brooklyn to Hollywood, Florida. My dad was a rageaholic, a s***-kickin’ Texan. He had a bit of a temper but on the other hand, he was funny, tall and strong.”

Dickinson’s childhood was very tough, and by all accounts her father didn’t treat her as well as he might have. As a result, Dickinson still has very mixed feelings about her childhood when she looks back.

“I loved growing up, and I didn’t, I don’t want to bring you down, I am an Alpha female, so I was told by my dad, the cowboy, that I should have been born a man,” she said.

“I was looking at him at three years old, thinking, why is my dad telling me I should have been born a guy? So I thought maybe I should act like a boy. I began to surf, do karate and go swimming. That’s why I have these amazing guns. I still do yoga every day.”

“My mum didn’t know what to do with me. I was in Catholic school where the nuns were beating me and my dad was beating me at home because I had a big mouth,” she added.

“I was even beaten by my ballet teacher, I was trying to do the poses but I was talking the whole time. They hit you back then. They just smacked you round. If I saw the nuns today I would punch them right back.”

As Janice became older, she developed a significant interest in fashion, particularly modeling. In an interview, she explained that when she saw Lauren Hutton in an American Vogue shot, she wanted to be in the same picture.

Her mother was relentless when it came to pressure, but this proved to be a helpful thing in some cases.

“I am the supermodel and princess to the people”

She decided to put Janice in several classes after school, including language, ballet, and church twice a week. Then, at 15 years of age, Dickinson went to modeling school.

She described herself as a tall teenager. “An ironing board with legs,” she recalled in an article for Sunday Times, “I was tall and dark, with no curves, no nothing, and I took heat for it from everyone around me.”

“I’m 5ft 10 and I was very flat-chested back in those days. I got these [breasts] much later in life. The modeling instructor told me my look would never make it. But if you want to succeed in anything you have to believe in yourself. I still have this blind confidence, I believe in myself and people, I love people. I am the supermodel and princess to the people,” she told Evening Standard.

Janice became obsessed with fashion and its various magazines. Then, in the early 1970s, she moved to New York City to pursue work as a model after winning a national competition Miss High Fashion Model.

As with every person’s dream, breaking into a highly-competitive business is a very tough and time-consuming job. Countless actors, musicians, dancers, and other entertainment personalities have shared stories about struggling in the early phases of their careers, and not getting the work they wanted. Not only that, but many of them have opened up about the business not being what they’d expected.

For Janice, her early career was no different. The fashion industry has long come under heavy criticism for creating skewed body ideals, and it was no different for Janice when she was starting out.

Tough start to her modeling career

Now, it’s fair to say the industry has improved its ideals over the past few years. For example, in 2017, high-end fashion brands Dior and Gucci both dropped super-skinny models, preferring to show the world as it is, with body shapes of all kinds.

But this wasn’t quite the case in the 1970s when Janice made her way to New York to try and make it as a model. Casting agents said that she – with her lush lips and dark hair – was too Mediterranean-looking to succeed.

But Janice was never one to give up. She decided to leave New York City, and instead moved to France, where her looks were greatly admired. Back then, she was only in her late teens, but was motivated by a voice echoing in her head. It was her father’s voice, and she used his insults as fuel.

Dickinson split her time between Paris, Milan, and London, working every day to fulfill her dream. It was a tough life, and she struggled to earn any money from it.

Finally, however, in the late 1970s, she got her big breakthrough.

Became the most prominent model in the world

Dickinson found herself working with Richard Avedon for American Vogue, and Guy Bourdin for French Vogue, and so was able to fly around the world first-class. It was her ticket to the big stage, and not long after she became the most prominent name around. Suddenly, everyone wanted to work with her – and her trying years in Europe began to pay off.

Dickinson’s face came to be known all over the world, as she worked with brands like Versace, Calvin Klein, Christian Dior, Revlon, and Valentino, as well as appearing on magazine covers such as Vogue and Elle.

“Before Kate, Christy, Naomi, and Alek Wek came along, I’m flying to Japan with Calvin Klein and Iman,” Dickinson said. “I just worked. I was Versace’s favorite. Issey Miyake’s favorite.”

Being one of the most famous models of all time also meant socializing with celebrities. In the 1980s, she dated Mick Jagger, Warren Beatty, and Jack Nicholson, and was linked to the likes of Sylvester Stallone and Bruce Willis.

But the heavy workload – together with plenty of partying – took its toll. In the mid-1980s, Dickinson took a break, though she continued to work as a model.

In 2003, she became a high-profile television judge on the show America’s Top Model, serving on the judging panel alongside Tyra Banks, Kimora Lee Simmons, and Beau Quillian. Dickinson stayed on the show until 2008. Sadly, she and Tyra Banks didn’t get along at all.

“We went [to] a lot of places, but sitting next to Tyra for hours and hours can be daunting because she didn’t really like me, and we didn’t really get along. And she never did Vogue. I did Vogue. She did Elle, and I used to constantly remind her of that,” Dickinson said on the podcast Behind The Velvet Rope with David Yontef.

“You know, I didn’t really treat her like a producer. She kept saying, ‘but I’m the producer of the show.’ I was like, ‘oh yeah, right, whatever.'”

Later on, Janice would also make a controversial claim about the top-rated show, insisting that America’s Next Top Model was rigged.

“CoverGirl are the ones who choose the model — not any of the judges. People don’t know that!” the former model said in an interview on Janice TV at FilmOn.com, as quoted by US Weekly.

She continued: “The fact of the matter is [Tyra Banks] makes like $90 million. She makes a lot of money per year still hawking that franchise worldwide — they’re doing it in every country — and it’s CoverGirl who chooses the winner.”

America’s Next Top Model’s network, The CW, was quick to respond, stating: “This is completely untrue.”

Dickinson continued to work in television following her exit from America’s Next Top Model. In 2009, she started her own reality show, The Janice Dickinson Modeling Agency, which ran for four seasons. She also appeared in one season of I’m a Celebrity, Get Me out of Here!, as well as on the Finnish version of the Top Model franchise. Moreover, Dickinson opened up her own modeling agency and, in 2008, launched a jewelry line.

Today, it’s safe to say that Janice has had a long and successful career. At the same time, she’s been through several relationships and been married four times. In 1987, Janice and her then-husband Simon Fields welcomed her first child, son Nathan Shields. Seven years later, in 1994, she gave birth to her partner Michael Birnbaum’s daughter, Savannah Dickinson.

In 2016, Dickinson tied the knot with Robert Gerner – the couple are still happily married.

Now, besides being the world’s first real supermodel, television profile, and loving mother, Janice has also gotten plenty of attention for one other thing. Over the years, she’s undergone many plastic surgeries and procedures, something she isn’t afraid to share with the public and her fans.

Sadly, she went bankrupt in 2013. According to court papers, most of her $1 million debt seemed to revolve around unpaid plastic surgery bills, as the New York Post reported. According to Celebrity Net Worth, Dickinson currently has a net worth of around $500,000.

Janice has, as mentioned, been very open about her plastic surgeries, admitting to facelifts, a tummy tuck, neck lift, breast job, Botox, and liposuction.

She appeared on the television show Botche to fix her breasts, saying: “I am no stranger to plastic surgery.”

“I live for plastic surgery,” she told In Touch Magazine in 2014.

However, there are some things she says she will never do. For example, Dickison said she won’t ever consider butt implants, nor put anything in her cheeks. She went on record to state that she has “perfect bone structure.”

Though Janice continues to experiment with plastic surgery, she also opened up on the one thing that would make her stop. The former global supermodel said that she’d quit going under the knife if her son ever asked her to.

“I won’t do any more plastic surgery if he’s looking,” she said.

“She’s undergone pretty much every facial plastic surgery there is”

Celebrity plastic surgeon Dr. Anthony Youn – who has not treated Janice Dickinson – told Radar Online that he suspects Janice has done pretty much every procedure there is to do.

“Janice has made no bones about how much plastic surgery she’s had. The self-proclaimed world’s first supermodel has even undergone some procedures on reality TV. You name it, she appears to have had it,” Youn said.

“I believe she’s undergone pretty much every facial plastic surgery there is, including a facelift, eyelid lift, lip injections, Botox, fat injections, and a brow lift. She’s probably single handedly paid for her plastic surgeon’s house!” he said jokingly.

“While Janice doesn’t look a whole lot like her previous self, she’s holding up pretty well … With quite a bit of help,”

Despite her father’s actions, Janice Dickinson was a courageous person for pursuing her dream of being a model. What do you think about her plastic surgeries?