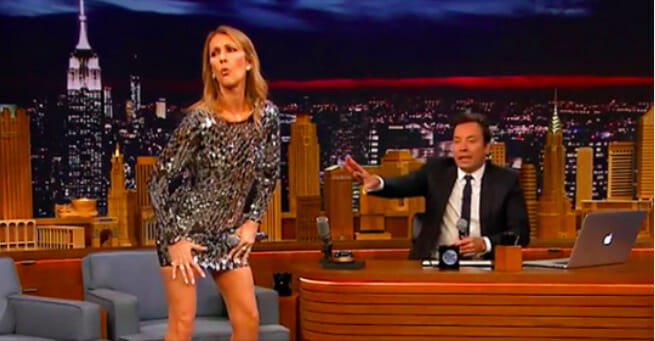 She is one of the greatest recording artists of all time. Canadian born Celine Dion has rocked, entranced and spell-binded the world with her songs and powerful yet soothing voice for decades.

But Celine is also known for her fabulous personality — which she demonstrated very well on an episode of popular talk show, Jimmy Fallon.

Personally, I had to watch this twice!

Popular TV talk show host Jimmy Fallon is known for his wit and playful personality. As part of his show, he often involves his guests in fun segments and games, such as his popular “Wheel of Musical Impressions”.

When Celine Dion appeared on his show, he made sure to play the fun game alongside of her — to the crowd’s great delight.

The simple game consists of impersonating various singers using unexpected songs, such as nursery rhymes. An artist and song are randomly selected — then Jimmy and his guest take turns singing whatever tune was generated — in the style of the artist chosen. The result is, needless to say, hilarious!

Celine Dion proved to the public that not only does she have a powerhouse voice — she has a real knack at imitating other singers as well. From Cher, to Rihanna, to Sia, the 50-year-old superstar nailed every challenge she was given.

What I love most about Celine Dion is that despite her incredible stardom, she has always managed to remain grounded,  personable and funny!

Watch just how hilarious she can be in the bit below.

If you enjoyed watching this as much as we did — and also love Celine — make sure to share this clip with your family and friends!