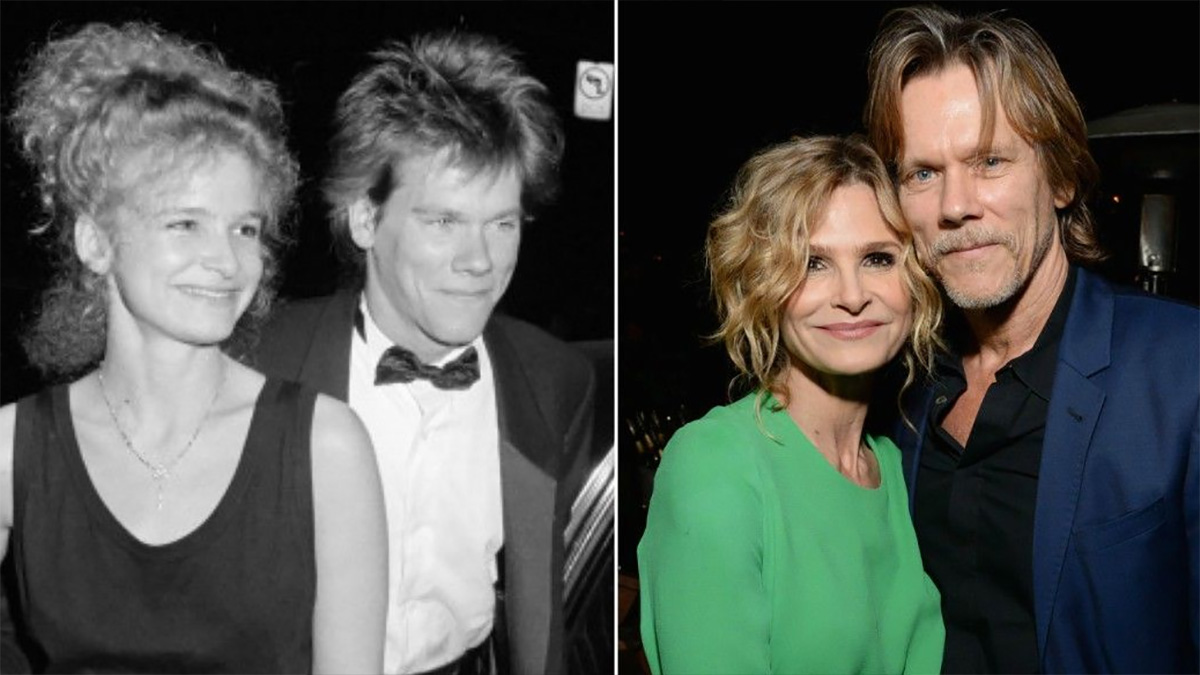 Kevin Bacon and Kyra Sedgwick are superstars in their own right and we’d all be forgiven for forgetting these two have been married for over three decades.

Kyra was just 12 years old when she first met Kevin, 7 years her senior. She had gone to see a movie with her brother, which starred Bacon, and then met him after.

It wasn’t until a decade later that their paths crossed again on the set of Lemon Sky. Kyra revealed that Bacon wasn’t really her type.

“He definitely wasn’t my type. In fact, I vividly remember looking at his butt when he walked away after we first met and thinking, Well, I guess some girls like that,” Kyra admitted to Wide Open Country.

But she changed her mind and the two married the following year, in 1988.

The couple tied the know in a private ceremony in Connecticut and had a reception for 300 guests at the Manhattan club Au Bar. Kevin and Kyra, who got engaged on Christmas Eve in 1987, only invited friends and family to their reception.

Shortly after the wedding, they welcomed their first child Travis Sedgwick Bacon. Their other child, Sosie Ruth, was born in 1992.

Sosie follows in the steps of her parents and has starred as Skye Miller in the Netflix teenage drama” 13 Reasons Why”. Travis makes a living as a solo musician and has written the music for his parents’ movie “Story of a Girl.”

Now 34 years later the couple is celebrating their anniversary and couldn’t be happier. The Bacon’s decades-long marriage is something of a miracle in Hollywood.

“If someone had told me that at 22 I was going to meet the man I was going to marry and at 23 I would marry him and have a child, I would have told them they were out of their mind,” Kyra told Redbook in 2008.

Bacon is clearly still as much in love with his star wife, and he always makes sure to celebrate their wedding anniversary. In fact, both Kevin and Kyra often post declarations of love on each of their Instagram accounts.

But their romance hasn’t always been easy.

“The time I was hitting what I considered to be bottom was also the time I met my wife, our kids were born, good things were happening. And I was able to keep supporting myself; that always gave me strength”, Bacon told reporters.

Lost a lot of money

The couple did admit that it hasn’t always been smooth sailing sharing the moment their life savings were lost when in 2008 Bernie Madoff pulled off what was called the largest Ponzi scheme in history.

According to some sources, Bacon and Kyra Sedgwick lost $100 million, but Celebrity Net Worth claims they ”only” lost $30-$40 million.

But they braved the storm as they both had jobs and although lost millions they didn’t lose everything.

“It was a bad day,” Bacon told The Guardian and continued: “But pretty quickly we were able to see all the things we had as opposed to whatever we lost, and those are the biggest cliches: children, health, love, a nice home. So we got through it together. I don’t think about Madoff, like, at all.”

In an appearance on the U.S. TV show “Finding Your Roots” Kyra discovered that she and Bacon are ninth cousins, once removed.

A DNA test revealed that the actor and actress were distant cousins, which could give you an odd feeling, and Kevin wasn’t that thrilled.

Kyra claimed” she knew it” but said it was “a little unsettling.” However, she added that she was okay with the revelation, as long as they were not first cousins.

When PBS investigated Kevin’s family ancestry, the show discovered that King Edward I, who fought William Wallace, was his 22nd great grandfather. Kevin joked that his ancestry did not get enough attention, and he also commented on the fact that he and his wife were first cousins.

“I kind of felt like it was a joke at my expense, you know,” he said.
But even though it was a shocking discovery, Kevin and Kyra obviously went on, and their love has grown stronger each year.

Recently they’ve had a chance to spend even more time together during quarantine at their LA home.

“I’m doing a little writing, even though I truly don’t have any sense of whether or not I’m any good at it at all,” Kyra told People.

“It really is about just finding something to do. Certainly, I don’t spend time with my husband reading Shakespeare, but we’re watching a lot of stuff and we’re reading. We continue to read stuff. I continue to read. I’m trying to touch into my work on a daily basis, for sure.”

Kyra also admits that no matter where they are her husband always makes her feel special.

“I don’t know how he does it, but he always makes me feel like I’m the most beautiful woman in the room – the only girl in the room,” Kyra told People.

She also credits their incredible spark in the bedroom.

“Sex is really important. That desire is there,” Sedgwick shared with Redbook in 2012.

As for his wife, Sedgwick told Good Housekeeping in 2012 what she loves about her adoring husband.

“He is so honorable. He is so ethically true. He has high moral standards, and he doesn’t lie and he doesn’t cheat—and I find that sexy!” she said. “I am constantly in awe of Kevin’s levelheadedness and his lack of ‘crazy.’”