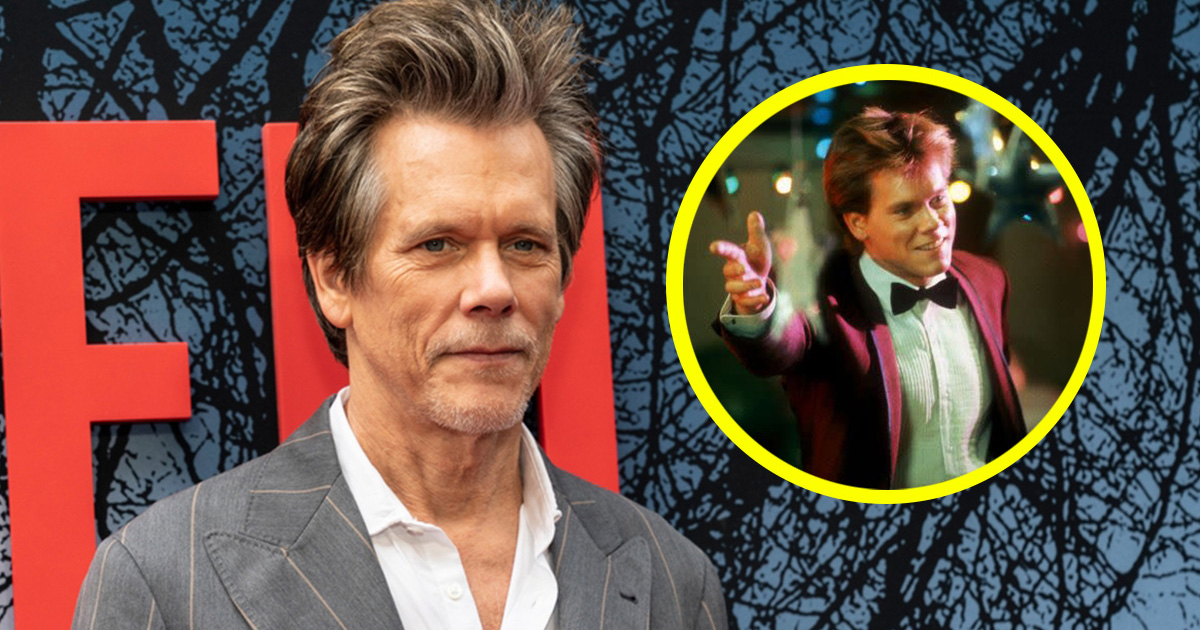 Kevin Bacon is one of the most successful and prolific actors of his generation. He’s appeared in dozens of successful films, including JFK, A Few Good Men and Apollo 13, co-starring with nearly every major actor in Hollywood (as anyone who’s played “Six Degrees of Kevin Bacon” can tell you.)

But to a generation that came of age in the 1980s, he will always be remembered for the movie that made him famous: the teen classic Footloose.

In the film, Bacon plays Ren, a dance-loving teen who moves to a small town where dancing is forbidden.

The movie has a very memorable soundtrack, and is perhaps best remembered for the prom scene featuring Bacon’s dance moves to Kenny Loggins’ theme song:

But while his on-screen character is eager to “cut loose” and “kick off the Sunday shoes,” it turns out that Bacon is a lot more hesitant to hit the dance floor in real life — at least when it comes to Footloose.

And in fact, the actor goes the extra mile to not have to recreate any of his iconic moves. For years, a rumor circulated that whenever Kevin Bacon goes to a wedding, he bribes the DJs — just so they won’t play “Footloose.”

It sounds unusual, but it also makes sense: it’s easy to imagine a wedding guest requesting “Footloose” to get the actor out on the dance floor to once again get the party started with some sweet moves.

In a 2013 interview with Conan O’Brien, Bacon confirmed that he does indeed pay off DJs when he goes to weddings — less to be a spoilsport and more so he doesn’t upstage the bride and groom.

“I go to the disc jockey and hand him $20 and say, ‘Please don’t play that song.’ Because, first off, a wedding is really not about me, it’s about the bride and groom and it’s embarrassing,” he told Conan.

Bacon then does a funny impression of people trying to egg him onto the dance floor as the Loggins song starts, and says he “tries to avoid that if possible.”

Bacon again confirmed the rumor in a 2020 appearance on the podcast Pardon My Take. The actor acknowledged that part of the reason is also because, at 64, he might not be able to do the moves that made him famous in 1984.

He also joked that, sometimes, there’s no actual danger involved, as some DJs don’t even know who he is.

“There’s also the risk that the guy goes, ‘Thanks for the 20, I have no idea who you are,'” Bacon joked.

Bacon isn’t the only actor who gets constantly followed by a famous movie theme song. Kate Winslet, the star of megahit Titanic, says people will always play the film’s ubiquitous theme song “My Heart Will Go On” whenever she’s around.

“It’s thrilling for people to surprise me with the Celine Dion song,” she told MTV News in 2012, joking that the song makes her feel like “throwing up.”

“I just have to sit there, you know, kind of straight-faced with a massive internal eye roll.”

Although Kevin Bacon goes out of his way to avoid “Footloose” at weddings, he’s not afraid to revisit the film or recreate its famous choreography.

In a 2014 appearance on The Tonight Show, Bacon entered the stage with an homage to Footloose, reprising some of his dance moves:

And earlier this year, the “Footloose” theme went viral on TikTok as the “Footloose challenge” where dancing couples do a tricky partner-dropping dance move to the song.

Kevin Bacon decided to get in on the action, performing the move with his wife Kyra Sedgwick in a video that went viral on social media.

I don’t remember this being part of the original #Footloose choreography,” Bacon wrote. “But figured we’d give it a spin.”

Kevin Bacon might dread hearing “Footloose” at weddings, but it’s clear he has a soft spot for the ’80s classic that made him famous and still has plenty of the old dance moves left in him 🕺

Please share this story if you love Kevin Bacon!