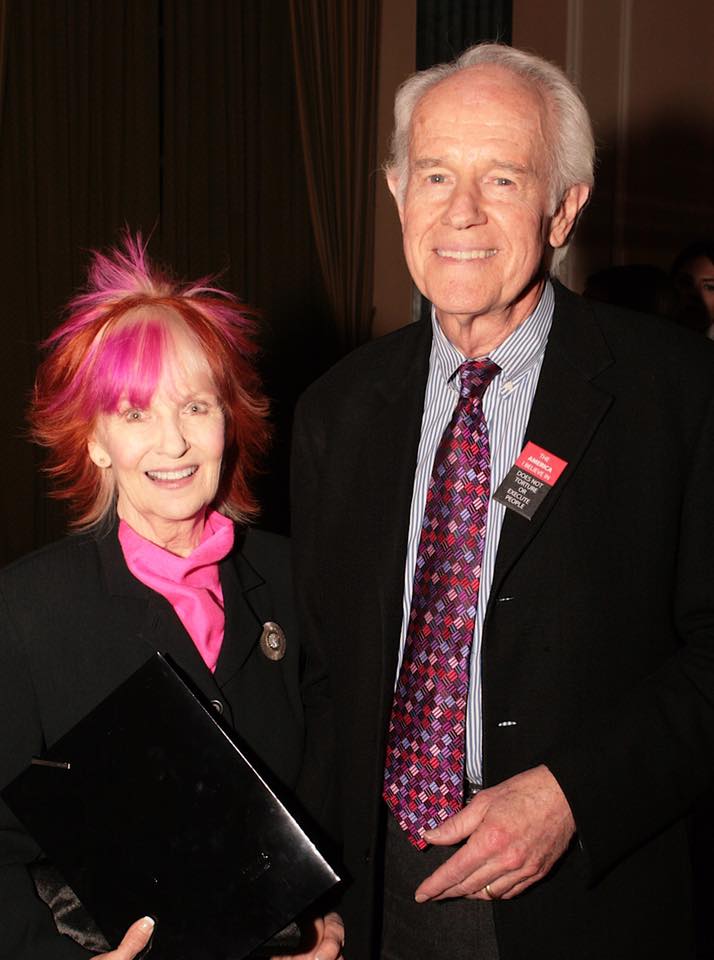 Mike Farrell is most known for his role as Captain B.B. Hunnicutt on the hit show M*A*S*H.

While he was first married to his co-star on the show, Judy Farrell, for 20 years, he eventually fell in love with Shelley Fabares.

Their love was truly tested by factors outside of their control.

Judy Farrell, Mike Farrell’s first wife, played Nurse Able on an eight-episode run of M*A*S*H. The couple was married in 1963 in Laguna Beach.

The Farrells came together before fame found them when Judy was a high school teacher and Mike worked as a process server. At the time, they both spent some of their free time working at the local Laguna Playhouse.

Eventually, Mike pursued acting full-time and the couple began to depend exclusively on Judy’s income. They were married for 3 years before eventually separating for about a year around this time, with Mike Farrell explaining:

“We just weren’t communicating. When we got together, we were more able to accept each other. Now when any problem arises, we are usually able to recognize the danger signs and do something about it beforehand.”

Judy and Mike had two children in their time together, Erin in 1963 and Michael in 1970. They spent as much time as they could with their children, with the happy father admitting:

“We got a lot of flak about Mike when we wouldn’t farm him out to a babysitter. But we wanted him to have continuity in the people around him.”

They did, however, hire some help, including full-time help and an au pair for the children. Mike and Judy were happy to have consistent help for the children, and dismissed claims that they weren’t disciplining them enough:

“People warned us that if we went to them whenever they cried and refused to spank them, we would harm them irrevocably. But we decided there’s simply no way to spoil a child. After all, they aren’t apples.”

While working on raising his children with Judy, Mike met Shelley Fabares in 1970. She has a guest appearance on his then-series “The Interns”, and the two did not start a relationship then.

Mike and Shelley did not start a romantic relationship until 12 years after their first meeting, reuniting at the CBS affiliates convention.

Mike and Judy had already divorced by the time (in 1983), and Shelley also had been through a divorce with former husband and record mogul Lou Adler.

After reuniting at the convention, the couple went for coffee. Later, Mike invited Fabares to an exhibit of his own photography and film in Central America.

They dated for only a year before Mike proposed to Shelley and the two were married in 1984.

As is expected when blending families, the transition to a new marriage was not an easy one. Mike’s children, Michael and Erin, were not immediately accepting of Shelley as a stepmom. Fabares explained:

“The divorce was very hard on the kids. It took a lot of love, patience, courage, and strength, but now they have two solid homes, which is what we all wanted.”

Not long after the marriage, Shelley also lost her “The Donna Reed Show” co-star Donna Reed to pancreatic cancer in 1986. Fabares’s real-life mother was diagnosed with Alzheimer’s at the same time, draining Shelley’s emotions and energy.

“I just stayed at the hospital for months, and never, ever did Mike question it. He was always easing my mind. He ran everything for me. He has become my safe harbor. To have his strength when everything else is out of control, that’s the unbelievable gift he has given.”

Around this time, Mike began to slow down with acting, only occasionally taking roles as an actor and producer for TV and film. Most of his time is spent working in philanthropy, including prison reform and international human rights campaigns.

Shelley has spent much of her time in their 37-year marriage fundraising for the Alzheimer’s Association in honor of her mother. She also has joined Farrell on various mission trips.

Despite early bumps in the road, the couple was on their way to smooth sailing for a while. That is until Mike had to become a caregiver for his beloved wife in an unexpected way.

In 1994, Shelley through the couples’ floor when their home was under construction. She broke every rib on the left side of her body and had to be given a liver transplant as a result.

While being initially treated for her injuries, her doctor informed her that her life counts were unbelievably high.

Shelley’s counts were stabilized for a few years with medication, but the doctors were not sure what was causing the problem in the first place.

Eventually, in 1999, Fabares had an esophageal bleed—a sudden, severe amount of bleeding in her esophagus—and was immediately rushed to Cedars-Sinai Medical Center’s Emergency Department.

Doctors made the link between this event and progressive liver failure, which prompted them to recommend a liver transplant for the star. Shelley’s liver was failing in a way that medicine could not cure, and a future bleed could prove fatal.

After being added to the waiting list for a new liver, Fabares explained that she was aware many on such a list did not live long enough to receive a transplanted organ:

“I was very much aware that I was living on borrowed time. The strain was enormous, but there was also a level of acceptance within me. There are no words to express what this experience is like, physically, psychologically, and spiritually.”

The couple waited anxiously for their pager to go off and deliver good news, all while Shelley’s condition worsened.

“I was simply exhausted all the time,” she remembered. ‘I wasn’t in pain, but I was sleeping almost all the time.”

In the years since her successful liver transplant,  Fabares said that while she would never wish her experience on anyone, she has learned some valuable lessons from her ordeal:

“This experience has so changed me. Even though life has returned to some degree of normalcy, I’m a different person.”

Shelley notes that Mike’s support and caretaking were monumental to her at the time and that it only brought the couple closer together.

“I’m so incredibly blessed by the man I am married to. I was so very ill for such a long time, and we didn’t know what was wrong, but he was with me every step of the way.”

While illness can make or break many couples, Fabares has only ever expressed thankfulness for how her husband and overall support system came together for her.

We would all be thankful to have a partner like Mike Farrell in our lives! It is clear that this couple’s devotion was tested and proven true through everything they have been through.