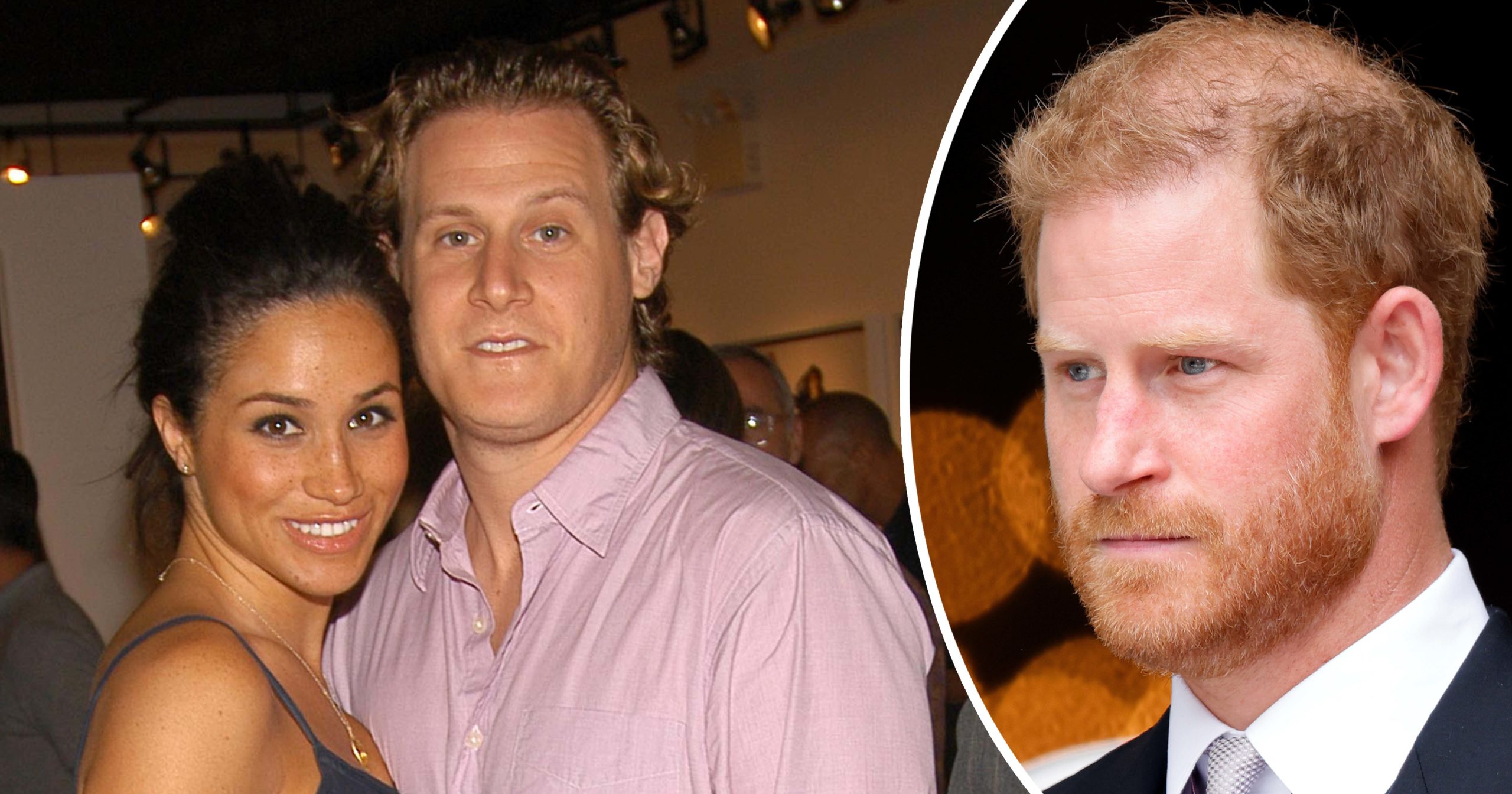 Meghan Markle has been happily married to Prince Harry for six years now.

It’s fair to say that the couple have embarked on an extraordinary journey, having two children, leaving the Royal Family entirely, and moving to the US.

Of course, her union to Harry isn’t the first time Meghan Markle has been married – she actually tied the knot back in 2011 with Trevor Engelson.

Meghan and Trevor divorced just two years later, and she went on to become a big television star through her role in the series Suits. Trevor, meanwhile, continued his journey in the entertainment business.

What really caused the divorce between Meghan and Trevor is still quite the mystery. However, a royal expert has now suggested that Meghan divorced him “out of the blue” – and that there was a particular reason for her doing so.

Here’s all you need to know about Meghan Markle’s first marriage.

Meghan Markle was born on August 4, 1981, in Los Angeles, California.

At a young age, she was welcomed into the world of show business thanks to her father, Thomas Markle, an Emmy award-winning lighting director. On many occasions, Meghan got to join her father on set.

She attended the all-girls Immaculate Heart High School in Los Angeles, which was a big contrast compared to being on set.

“Every day after school for 10 years, I was on the set of Married, with Children, which is a really funny and perverse place for a little girl in a Catholic school uniform to grow up,” she told Esquire.

“There were a lot of times my dad would say, ‘Meg, why don’t you go and help with the craft services room over there? This is just a little off-color for your 11-year-old eyes.'”

As a child, Meghan showed a strong will to change the world to a better place. By age 11, she saw a commercial for a dishwashing soap only aimed at women, which upset her.

“I don’t think it’s right for kids to grow up thinking these things, that just Mom does everything,” she said.

Her father supported his daughter’s will to change things, and aided her in writing to high-profile people, including Hillary Clinton, hoping they could help. Just a few days later, the company producing the soap changed its slogan from “Women All Over America” to “People All Over America.”

Since Meghan was very interested in show business, she went on to study communication at Northwestern University. She says she always wanted to act but “hated the idea of being this cliché a girl from L.A. who decides to be an actress.”

Later, she moved to Illinois to double-major in theater and international relations at the prestigious Evanston school.

Following her getting an internship at the U.S. Embassy in Argentina, Markle thought she might head into a career in politics. However, the theater was always her biggest dream, even if her first job in show business wasn’t all that great.

Markle auditioned for shows at the same time as she studied, but her first role was actually as a briefcase girl on the game show Deal or No Deal.

“I was the ill-fated number 26, which for some reason no one would ever choose,” Meghan told Esquire.

“I would end up standing up there forever in these terribly uncomfortable and inexpensive five-inch heels just waiting for someone to pick my number so I could go and sit down.”

Soon after, she started appearing in productions, landing more minor roles in films such as Get Him to the Greek and Remember Me, as well as the television series General Hospital. However, everything changed in 2011 when she landed the part of paralegal Rachel Zane on USA’s monster hit Suits.

She got great advice from her dad, having been a photography director.

“I will always find my light, no question,” she said. “And if I don’t, I’ll know, because my dad will be the first person to call me and say like, ‘You need to have him bring another 2K in,’ and ‘Why aren’t you using this sort of lighting gel?’ The crew guys know that it’s where I grew up.”

Meghan Markle – who is her first husband Trevor Engelson?

Meghan played the part of Rachel Zane on Suits until 2018. That was the year her life would again change forever when she met and married Prince Harry.

As we know, however, Meghan had actually been married once before.

While yet at the beginning of her successful acting career, Meghan met her first husband, Trevor Engelson. According to IMDB, he was born on October 23, 1976, in Great Neck, Long Island, New York, and attended the University of Southern California’s School of Communications.

Engelson started as a production assistant in the film business, but worked his way up to become a film producer. He’s worked on many projects, including the 2006 film Remember Me, starring Robert Pattinson. His then-girlfriend Meghan Markle had a cameo in his movie early in her acting career.

Moreover, Trevor has been involved in productions such as License to Wed and All About Steve. Furthermore, he’s acted as executive producer on six episodes of the Heathers television remake.

According to Grazia, the 45-year-old manages screenwriters, novelists, actors, and film directors in Los Angeles when not on set working with films and television shows.

So, how did Trevor and Meghan Markle meet? According to The Sun, they crossed paths for the first time in 2004. The couple dated for about seven years before marrying in September, 2011. Their wedding took place at the Jamaica Inn in Ocho Rios in Jamaica, and lasted for three days.

Trevor was ‘to busy’ to visit his wife

According to The Sun, the couple arranged for around 100 guests to attend parties, drinking games at the beach, brunches, and even a wheelbarrow race. The ceremony? Well, that only took 15 minutes.

As mentioned, Meghan was one of the briefcase models on the game show Deal or No Deal. However, according to the author Andrew Morton’s book Meghan: A Hollywood Princess, Trevor wasn’t too keen on seeing her while she was on set.

According to Morton (via Express), Engelson didn’t visit her as other husbands or friends of the models did, which was “unusual.” Apparently, this was because he was occupied with his work as a producer, and even skipped out on traveling with Meghan during her downtime because of it.

“They were driven individuals, Trevor as busy, if not more so than his girlfriend,” royal biographer Andrew Morton wrote in Meghan: A Hollywood Princess.

“It was also noticeable that unlike the boyfriends and husbands of her Deal or No Deal sisters, Trevor never visited Meghan on set.

“It was so unusual that his absence was commented on by the other girls.”

“However, there were plenty of other celebrities, mainly sports stars, who dropped by, some clearly trying to get up close and personal with the girls,” he added.

In 2011, the same year Meghan and Trevor married, Meghan Markle debuted on the television series Suits. It was an instant success, and not long after, she moved to Toronto as the show was mainly filmed there.

Meghan landed the role just months before she married Trevor, and having to take a five-hour flight just to see each other became an obstacle for married life. Though they stayed connected through video calls, it didn’t solve the challenging situation.

“Whether she wanted to admit it to herself or not, Meghan who once said she couldn’t imagine life without Trevor by her side, was now building a new world for herself,” Andrew Morton wrote in Meghan: A Hollywood Princess.

“As Toronto was becoming more her home than LA, the dynamics in their relationship subtly altered.”

Markle stayed on Suits for more than 100 episodes, until 2018. But by 2013, she and Trevor Engelson had divorced. The couple cited “irreconcilable differences” at the time.

At a later stage, Markle’s half-brother Thomas told Express that Trevor “worshipped the ground she walked on”.

“Trevor was devastated at the split,” an insider told The Sun in 2017.

“She suddenly had no more time for him. Meghan broke Trevor’s heart, pure and simple. He is still in love with her and so the revelation of her new relationship with Harry has hit him hard.”

Royal biographer Andrew Morton suggested that the split shocked Trevor –  and that Meghan even posted her engagement and wedding rings to him as a sign that their marriage had ended.

“Whether she wanted to admit it to herself or not, Meghan, who once said she couldn’t imagine life without Trevor by her side, was now building a new world for herself,” he wrote.

“He would arrive for appointments slightly late and dishevelled”

“As Toronto was becoming more her home than LA, the dynamics in their relationship subtly altered. She was her own woman now, earning a steady income, making new friends on set and off, no longer dependent on her husband’s connections.”

Indeed, the spit between Meghan and Trevor seems to have been quite dramatic. Meghan’s former childhood friend Nikki Priddy and author Lady Colin Campbell seem tot hink so, in any case.

In the book Meghan and Harry: The Real Story, Campbell wrote that after moving to Toronto, Meghan began hanging out with celebrities, among them celebrity stylist Jesica Mulroney.

It led the former Suits star to distance herself from her then-husband.

“Trevor had always been laidback where she was controlled and controlling,” Lady Colin Campbell wrote.

“He would arrive for appointments slightly late and disheveled, his shirt out of his trousers and maybe a spot of food on his lapel, while the perfectly contained and self-possessed Meghan was always immaculately turned out.”

Nikky Priddy – Meghan’s maid of honor when she married Trevor – alleged that Meghan thought her husband was “embarrassing” for her image.

Trevor Engeelson to speak out in new tell-all book?

“According to Nikki’s interpretation of Meghan’s motives, having found herself a new and more ‘classy’ circle of friends, she did not wish to be bogged down with her embarrassing misfit of a husband or even her old and less Establishment circle of friends,” Colin Campbell further wrote in her book.

Meghan hasn’t spoken about the divorce with Trevor Engelson in public. Interestingly, though, royal fans might soon get to know her ex-husband’s story in full.

Author Tom Bower is set to release a new book about Meghan Markle. In an interview with Closer, he has promised fresh interviews with Trevor Engelson.

“This particular individual would truly have a remarkable story because, after all, he would have first-hand experience of what it was like, yes what it was like, to be married the first time around to the actress from Suits,” Bower said.

What do you think of this? Please give us your opinion in the comment section.