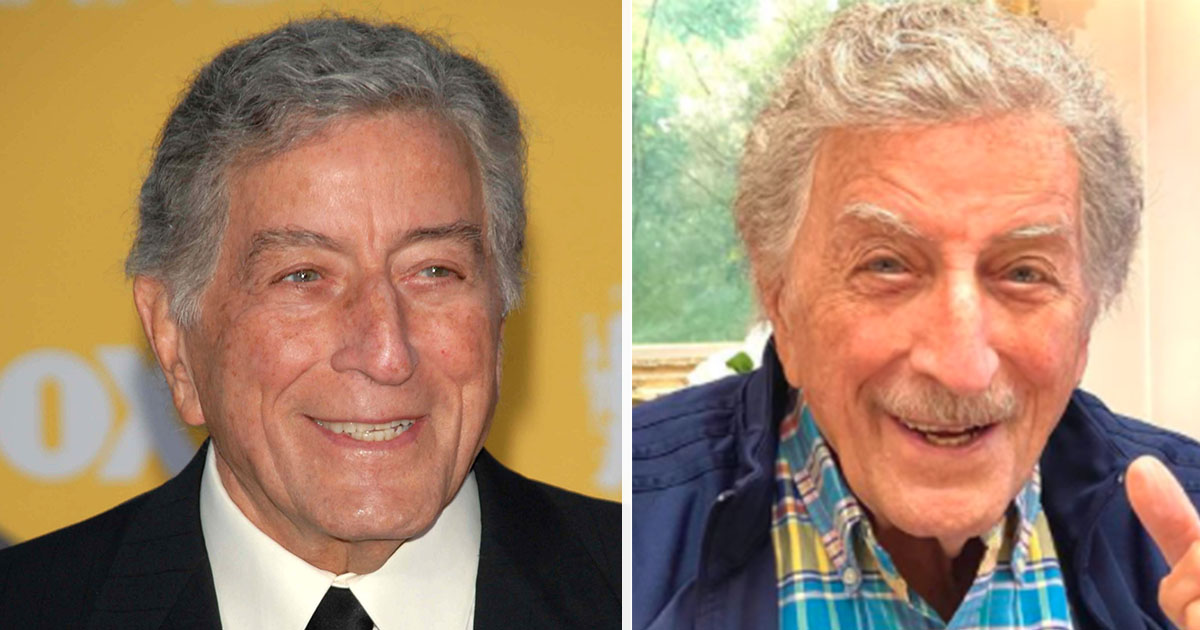 There are few musicians as legendary as Tony Bennett. The jazz singer has spent more than 70 years in show business and performed with stars such as Frank Sinatra and Ella Fitzgerald over the years.

However, age has taken its toll. In 2021, Bennett was diagnosed with Alzheimer’s disease and is now getting the best treatment possible.

Even so, the love of music hasn’t stopped where Tony is concerned. Now, news about ‘two last performances’ with Lady Gaga has been confirmed. We’d simply love to see him perform one final time.

Tony Bennett, 96, wasn’t born a superstar. In fact, the first few years of his life were pretty harsh.

Born Anthony Dominick Benedetto on August 3, 1926, in Queens, New York, Bennett’s parents had just made it through the Great Depression. When Tony was only 10 years of age, his father passed away, and his mother was left to raise three children on her own.

“She worked so hard, she made dresses and she taught me the greatest lesson I’ve ever learned,” Bennett told Nobhill Gazette.

“She said, ‘Don’t ever have me work on a bad dress. If it’s a good dress, I’ll work on it and make sure it comes out right.’ So, I applied that theory to music and never made a bad song. Every song is a worthwhile song to sing.”

As a young kid, Bennett adored Louis Armstrong, describing him as “the King”. He went to the High School of Industrial Arts in New York City, but eventually dropped out. Instead, Bennett started working as a waiter to help the family with their income. As it turns out, that was probably the best thing that ever happened to him.

Tony started singing at the Italian restaurant where he worked in his home town of Astoria, New York, all while serving food to the guests. It’s not the typical career path for someone we know today as one of the most legendary voices ever. But for Tony, it was perfect.

“I loved that time of my life, and I honestly feel that, if I hadn’t made it professionally, I would be perfectly happy going back to being a singing waiter,” Bennett recalled.

“It was a great training ground, as I learned so many songs from the cooks in the kitchen when we would get requests where we didn’t know the song or all the lyrics. And it also strengthened the love that I have performing for the public, which was first inspired by my Italian-American family.

“We would gather at our house every Sunday, have a big meal and then, afterwards, the family would sit in a circle and my brother, sister and I would entertain them,” he added.

“It was during that time that I realized that I loved performing and making people happy. So, whether it’s in a restaurant or a concert stage, it makes no difference — I just like to entertain people.”

Tony Bennett served in the Army infantry during World War II. Once back in the US, he started pursuing his big passion in life; music.

He went on to study singing at the American Theatre Wing. There, Bennett was coached by Mimi Spear, a person who became essential for his major success.

“That’s the same thing that Billie Holiday said in her book, that she imitated Louis Armstrong. I imitated (jazz pianist) Art Tatum. He held on to the basic melody like a rock, but his chords and sense of accompaniment were astounding.”

By this point, Tony was starting to perform more and more, now under the name Joe Bari. In 1949, he was finally discovered and picked up by the legendary singer, comedian and performer, Bob Hope.

Tony Bennett – ‘I Left My Heart in San Francisco’

He decided “Joe Bari” wasn’t a great name. Instead, it was at that point Hope suggested “Tony Bennett”. Ever since that day, it’s been his name.

Bob Hope loved what he saw in Tony, and went on to give him his own road show. As Bennett told Billboard in 1997: “I’ve been on the road ever since.”

In 1950, Bennett signed with Columbia Records and started working on recording straight away. His early hits included Rags To Riches, Because of You, and Stranger in Paradise.

Bennett attracted a very wide audience, and his wonderful, smooth voice gave him many younger fans.

By the end of the 1950s, he had become a very popular singer. At this point, however, Bennett wanted to try something else. He went into the jazz genre, and recorded several jazz albums.

One of his most famous songs was actually a B-side to a single, I Left My Heart in San Francisco. The song was released in 1962, and earned Bennett his first Grammy Awards for Best Record of the Year and Best Solo Vocal Performance. The song had been written in 1953, but it became somewhat of a signature tune – and paved the way for a lot more success.

“We were on our way to San Francisco and RalphSharon — who was my accompanist at the time — said, ‘You have to listen to this song.’. That was the first time I had ever heard I Left My Heart in San Francisco,” Bennett recalled.

“And on that trip, we had a show at a little club in Hot Springs, Arkansas. We were rehearsing the song and a musician came over and said: ‘If you record that song, it’s going to be a big hit’.

“So when we got to San Francisco, we started performing it and everybody said ‘Where did you find that song? You need to record it right away.’ We recorded it and, sure enough, it became the biggest record I ever had.”

The song became legendary, and elevated Bennett to the next level. In fact, it was selected for preservation in the National Recording Registry by the Library of Congress in 2018 for being “culturally, historically, or artistically significant”.

One could speak of Tony Bennett’s incredible career for days. He decided to leave Columbia Records – because of differences in what music they thought Tony should record – and instead, the legendary musician embarked on a whole different journey. Even though success didn’t come easy, he never gave up. And for that, we are so grateful.

Looking back on his wonderful career, Bennett has released 60 studio albums, as well as 11 live albums, selling more than 50 million records worldwide. However, it wasn’t until 2011 that he achieved his first No. 1 album on the Billboard 200 with Duets II.

Even though music has always been his life, it isn’t all Tony Bennett is concerned with. Together with his wife Susan Crow, he founded the Frank Sinatra School of the Arts in New York for artistically gifted teenagers.

For Bennett, the name for the school was a no-brainer.

“He changed my life,” Bennett told The Guardian.

“In [an article in] Life magazine, he was emphatic about saying that I was the best singer he’d ever heard. I was moderately popular then, and every so often I’d have a million-selling record, but for me it was about being good, not the most famous.

“[Then] he called me the best he’d heard. And since then, I sold out around the world. I thought [naming the school after him] was proper etiquette.”

Besides being a talented musician, Bennett is actually a well accomplished painter. He always signs his paintings with his given name, Anthony Benedetto, and has been featured at many well-received exhibitions.

“The greatest compliment I could ever get is being called a good singer and a good painter. I’ve always had a passion for both,” he explained. “I love both equally. It’s like a balance.

“But I paint almost every day. I like oils best, but when I travel I do a lot of watercolor, pen and ink, sketches and charcoal. I did some watercolors at the beach in Jupiter.”

Tony has also managed to reach a younger audience in more recent times, doing duets with both the late Amy Winehouse, as well as Lady Gaga. However, earlier this year, his life took a drastic turn.

In an interview with the Alzheimer’s Association, the Grammy-winning star revealed he was diagnosed with the condition, a “degenerative brain disease” which causes memory loss.

According to the ARRP, Tony was diagnosed with Alzheimer’s in 2016. However, his wife Susan said that he was “showing clear signs of the disease” by 2018.

Dr. Gayartri Devi – the neurologist who diagnosed Tony – said that Bennett is doing well, even though he has had “cognitive issues”. The doctor alsp noted “multiple other areas of his brain are still resilient and functioning well”.

“He is doing so many things at 94. He really is the symbol of hope for someone with a cognitive disorder,” Dr. Devi added, crediting Susan for her “level of devotion” for her husband.

“I’ve been humbled by [her]. She also expects a lot from him. I think her background as a teacher helps, but she’s also very much in love with him. And he rises to her expectations.”

In early July, Tony Bennett was seen in New York City alongside his wife Susan Crow during a rare appearance at the Tony’s MTV Unplugged Concert, where he performed with Lady Gaga. He looked “happier than ever” as reported by Closer Weekly.

Alzheimer’s is a painful and cruel disease, make no mistake, but the fact that we are seeing Tony doing well despite the condition is something to take heart from.

Alongside Lady Gaga, Tony will perform at the New York’s Radio City Music Hall for two nights in August – coinciding with Bennett’s 95th birthday. It’s being described as “their final performances together”, as reported by CNN.

Not only that, but it will be the last New York City performance of Bennett’s career, according to a press release. It’s “set appropriately at a venue that Tony has enjoyed a multi-decade run of sold-out shows.”

Later this year, the two will also release a new joint album.

“I am so honored and excited to celebrate Tony’s 95th birthday with him at these special shows,” Gaga said.

There aren’t many things Tony hasn’t done in his life. The Grammy-Award winning artist and painter has lived a whole life in show business, giving people hope through his music

So what has been the greatest honor?

“Meeting Susan, being an American and the reaction I get from my audiences. I can’t even describe how phenomenal that has been in my life,” he said.

Tony Bennett is a true legend, and we really hope he will be able to live for a very long time despite his Alzheimer’s. Thank you for all the wonderful music, Tony!