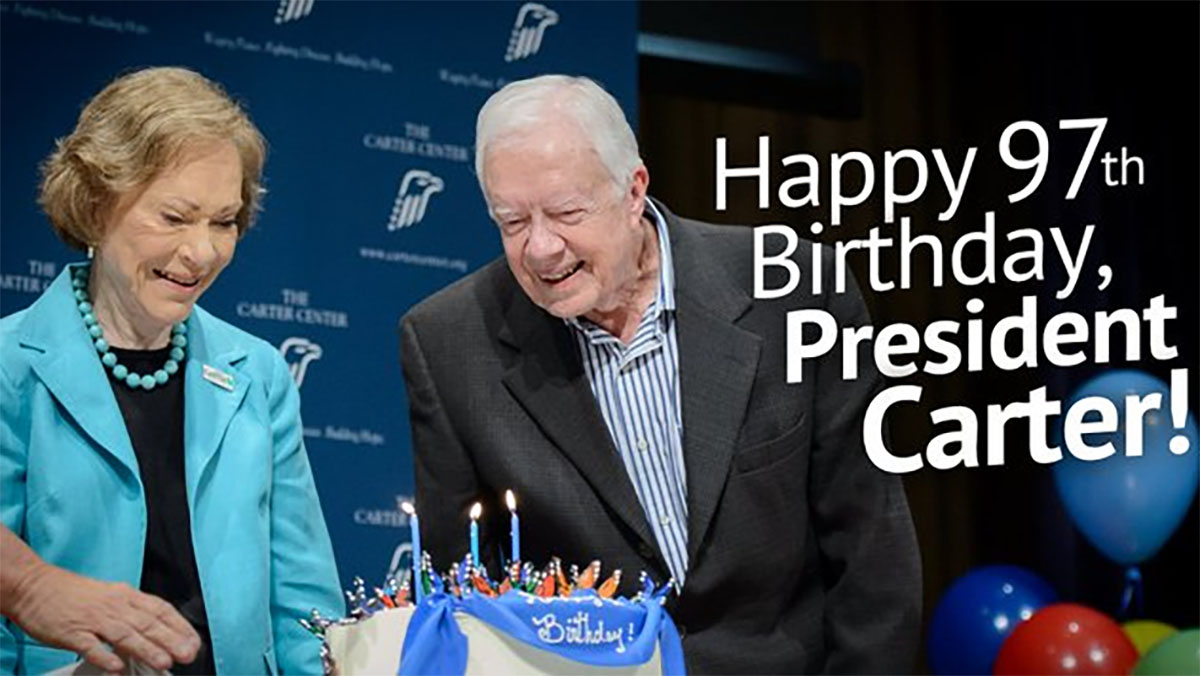 As the oldest living former U.S. president, Jimmy Carter is perhaps more celebrated for his work after his presidency than for his time in office.

Former President Jimmy Carter is celebrating his 97th birthday today with many coming out to wish him ‘Many Happy Returns’ and commend him on the decades he has spent volunteering, writing books, being an advocate for justice and teaching Sunday school.

The great-grandfather has been keeping a low profile during the pandemic and will be keeping his birthday celebrations low-key at his home in southwest Georgia on Friday, as per AP News.

He and his wife Rosalynn, who have 4 children, 12 grandchildren and 13 great grandchildren, have also set the record for the longest married presidential couple.

The Georgia couple married in 1946 when Jimmy was 21 years old and Rosalynn Smith was 18 after they were introduced to each other through his sister.

Carter served as the 39th president of the United States between 1977 and 1981, but it’s his work after leaving office that he is perhaps most admired for.

In 1982 he set up the Carter Center with a focus on human rights and both he and his wife have traveled around the world to conduct peace negotiations, monitor elections and help disease prevention in developing nations. In 2002, he was awarded the Nobel Peace Prize for his work with the center.

For over 30 years Carter and his 94-year-old wife can often be seen volunteering for Habitat for Humanity, which helps needy people and communities build homes of their own.

Just two years after setting up the Carter Center the couple took part in a Habitat for Humanity project in Georgia, and shortly after they were leading a Humanity group in New York serving 19 families in need of safe and affordable housing.

Since then the elderly couple can often be seen donning a tool belt and hardhat to help the nonprofit in many of its construction projects.

Carter has written over 30 books ranging from political memoirs to poetry, while continuing to actively comment on ongoing American and global affairs.

There really is no stopping this incredible human being, not even cancer, which he beat in 2015 after being diagnosed with a melanoma that had spread to his brain and liver. Four months after treatment he announced that he was cancer free.

A fall in 2019 left the former president with a broken pelvis, but he still makes public appearances using his walker to help him get around.

On September 24, the Carter Center shared a post to social media inviting followers to join in celebrating the former president’s 97th birthday by signing a card electronically.

Another well-wisher wrote: “We love you for your honesty, consistency and for being so articulate,” said one message.

In response to the hundreds of messages the Center has said feeling “humbled by the outpouring of support and cheer from around the world.” For those still wishing to join in, they are invited to “Please sign with your best wishes and/or photo.”

Please share so more people can wish this awe-inspiring man a very happy birthday and thank him for all he has done and continues to do to help make the world a better place.