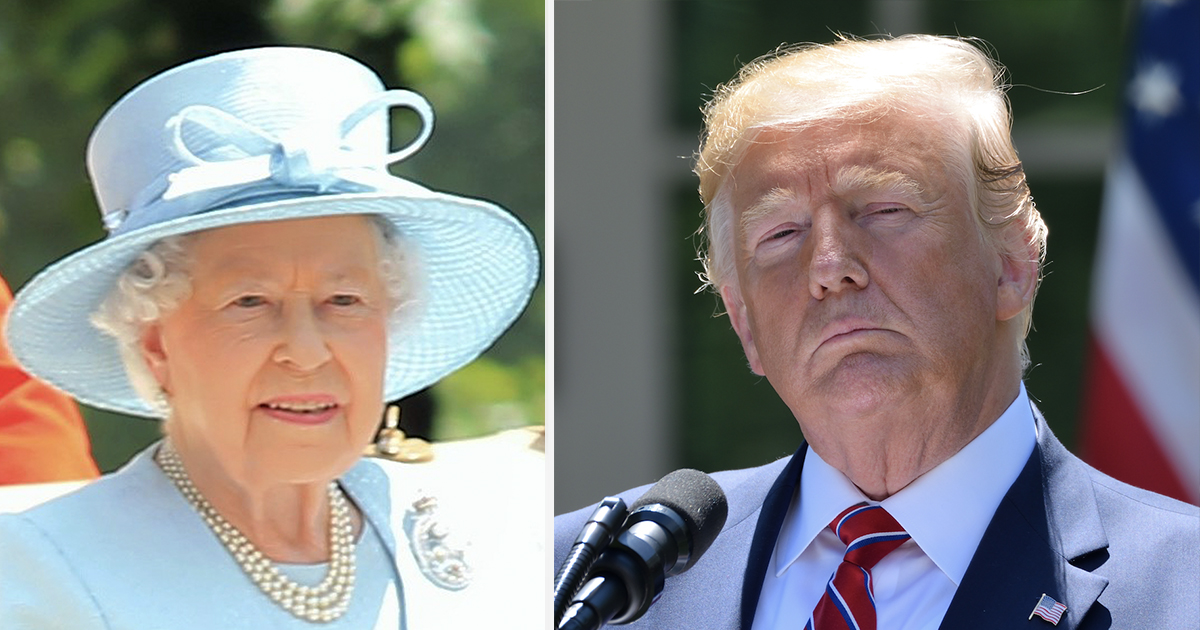 As one of the most well known monarchs in the world, Queen Elizabeth has many duties. Following the passing of her beloved husband Prince Philip, however, she’s expected to take a step down with regards her work load. Prince Charles and Prince William will step up to help her share the burden instead.

Besides attending events, amongst other official royal duties, Queen Elizabeth has the responsibility of meeting with world leaders that comes to visit the UK. Over the weekend, that mean she was hosting President Joe Biden and First Lady Jill Biden.

It sure is a big thing meeting the President, but the Queen is said to be ‘personally relieved’ that Jill and Joe are visiting? Why, well, she because she prefers them to Donald Trump.

Queen Elizabeth and the Royal Family have had a very tough year. Sure, the Covid-19 pandemic has made everything more complicated in life, but for them, this year has been especially full of difficulty and sorrow.

Elizabeth lost her beloved husband, Prince Philip, who passed away in April, aged 99. It was a huge loss for the entire family, but for the Queen, it meant officially grieving for two weeks before once again taking up her duties as monarch.

Queen Elizabeth appeared in her first public appearance since the funeral when she formally opened the British Parliament. It is regarded as one of the most significant duties she has, and was a truly heartbreaking scene.

Usually, the Queen wears her Imperial State Crown, as well as ceremonial robes, during the event. She also usually travels by coach on her way to parliament. However, this year was different due to the COVID-19 pandemic.

The Queen was instead taken to the Palace of Westminster in a car. And instead of the State Crown and robe, she wore a beautiful lilac colored dress and a hat.

Both Prince Charles and his wife Camilla accompanied the Queen into the Lords’ chamber. However, Charles didn’t sit next to her as he – and Philip – have done before.

Since Prince Philip’s passing, a new tragic detail was in evidence at the event. Namely, the throne Philip used to sit on had been removed. This is the first time that particular throne has been removed in 120 years, according to the Daily Mail. It was installed in 1901 for Queen Alexandra, who was the wife of King Edward VII.

Yet while Queen Elizabeth continues with her royal duties, they will undoubtedly be a deal emptier without her beloved husband.

Responsibilities to be ‘handed over’

She has remained steadfast in her duties for almost seven decades since inheriting the throne in 1952. Throughout this time, she’s battled personal turmoil within the Royal Family, global conflicts and many changes in the UK.

Of course, given her advanced years, it’s safe to say Elizabeth’s work isn’t getting any easier.

This, as per reports, may mean that some of the Queen’s responsibilities might be handed over to others in her family. For instance, her son and heir to the throne, Prince Charles. Not only that, but her grandson and the second-in-line to the throne, Prince William, may also need to step up.

“Her family will step up and be by her side, but she will carry on,” a source told People in early April.

“She understands that she has a job to do, and [Philip] would have wanted her to crack on. She did do so when he retired from public life,”

The source added: “She will never abdicate because of duty and honor and public service is so deep in her, as it was for him.”

A source told the Daily Mirror, meanwhile: “The Duke of Edinburgh is irreplaceable and the Queen’s dedication to duty is undiminished.”

Queen to start stepping back

With the Queen now 95 years old, former BBC royal correspondent Peter Hunt claims that Elizabeth soon will begin to slowly retract from the spotlight, and instead allow others to do the heavy lifting.

“Fundamentally, the queen will fade away gracefully,” Hunt said.

“Covid has helped in the sense that it has accelerated what any sensible 95-year-old woman would want to do, which is not stand on your feet all day long.”

Peter Hunt adds that even though the Queen returned to work after Philip’s passing, she’s very unlikely to go back to the hectic schedule she had before.

That included hosting receptions, meetings, garden parties and other events. Instead, she’s likely to attend meetings at Buckingham Palace just two days a week. For the moment, she lives at Windsor Castle, where she’s spent most of the last year in quarantine.

Prince Charles is next in line to inherit the throne. When he does, things could change rather quickly.

According to sources, Charles is even planning to “ditch” Prince Harry and Meghan Markle from the Royal Family once he ascends the throne.

Naturally, the situation with Harry and Meghan hasn’t made things easier for the Queen. However, last week, she had the great joy in welcoming another great-grandchild. Meghan and Harry announced the birth of their daughter, Lilibet Diana, named after the Queen herself.

Yet the Queen had other things to think about as well. Due to the Covid-19 pandemic, she hasn’t welcomed presidents, prime ministers and other dignitaries on state visits as she normally would. However, as things continue to improve thanks to the vaccinations, she finally got to meet one of the most, if not the most, powerful person in the world.

If you didn’t know the Queen recently hosted new US President, Joe Biden, as well as First Lady Jill Biden at Windsor.

“She was very generous”

Since the start of the COVID-19 pandemic, the Queen has been living at Windsor Castle rather than Buckingham Palace.

Joe Biden was in the UK for the G7 meeting, which took place in Cornwall. There, leaders from the world’s biggest economies discussed issues including vaccines, as well as climate change. And what could make the visit better than meeting the Queen?

Queen Elizabeth has met every US president – except Lyndon Johnson in the 1960s – since visiting Harry S Truman. The first US president that ever visited Windsor was Ronald Reagan, who actually went out on a horseback ride alongside the Queen in 1982.

What the Queen and President Biden talked about hasn’t been disclosed. However, as the Queen and the Bidens made their way up the stairs at Windsor, The Queen said to the president: “You completed your talks,” with which Biden replied: “Yes we did.”

“We had a long talk, she was very generous. I don’t think she’d be insulted, but she reminded me of my mother. In terms of the look of her and just the generosity,” Biden, 78, said of the Queen, 95.

So why don’t presidents and others who speak to the Queen reveal what they have talked about? According to the Guardian, it has to do with her wanting to “avoid embarrassing” herself. Since she’s the head of state, she’s not supposed to publicly comment on political matters.

Before the trip to the UK, President Biden seemed very exited about meeting the Queen.

Or as the President’s press secretary Jen Psaki told reporters last week: “Who among us wouldn’t want to meet the Queen?”

“They issued, of course, a graceful invitation, which he certainly accepted. He’s looking forward to seeing her with Dr Biden as well,” Psaki said.

Because of the Covid-19 pandemic, the new President hasn’t been able to go on trips overseas. The UK visit is the first one President Biden has done since taking office.

For Queen Elizabeth, meanwhile, she was happy to be meeting Biden instead of Donald Trump, if reports are to be believed.

According to royal expert Richard Fitzwilliams, the Queen was likely to have been “relieved” that it wasn’t Trump she had to deal with.

Trump broke protocol with the Queen

She’s said not to be a fan of his unpredictability. Therefore, even though she remains impartial in public, she was said to very happy that it was Joe Biden that came to visit.

“Given Donald Trump’s notorious unpredictability and the atrocious storming of the Capitol by a mob incited by him, she is likely to be personally relieved by Biden’s election victory,” Richard Fitzwilliams told Express.

“As the world’s most experienced head of state, she will undoubtedly appreciate the importance of America having a President with so much experience, especially during the unprecedented crisis of the COVID-19 pandemic.”

While President, Donald Trump actually met with the Queen during his UK visit in 2018. However, things took a negative turn which was labeled as a “mortal insult” to the Queen.

Upon inspecting the guards at Windsor Castle, Trump was seen turning his back on the Queen as he walked in front of her.

“Trump has also turned his back on the Queen. I have always believed this to be a mortal insult to a monarch,” royal historian Ian Beck wrote on Twitter.

During an interview with Good Morning Britain, Trump also breached protocol by telling the world what the Queen had told him about Brexit, saying it was “complex”.

“She said it’s a very, and she’s right, it’s a very complex problem,” Trump told TV host Piers Morgan. “I think nobody had any idea how complex this was going to be.”

Piers then began asking Trump about more details of what the Queen had to say, though he declined to answer.

“Well, I can’t talk, you know I’ve heard very strongly from a lot of people, you just don’t talk about that conversation with the Queen, right? You don’t want to do that,” Trump said.

“Let me tell you what I can talk about. She is an incredible woman, she is so sharp, she is so beautiful, when I say beautiful – inside and out. That is a beautiful woman.”

In 2019, Trump broke royal protocol again as he visited the UK. He shook hands with both the Queen and Prince Charles instead of giving them a traditional bow. A year later, both Trump and his wife Melania made the same mistake when meeting the royals at the NATO summit in London.

We are so happy to see that the Queen is doing good following a very tragic year. All the best to her!