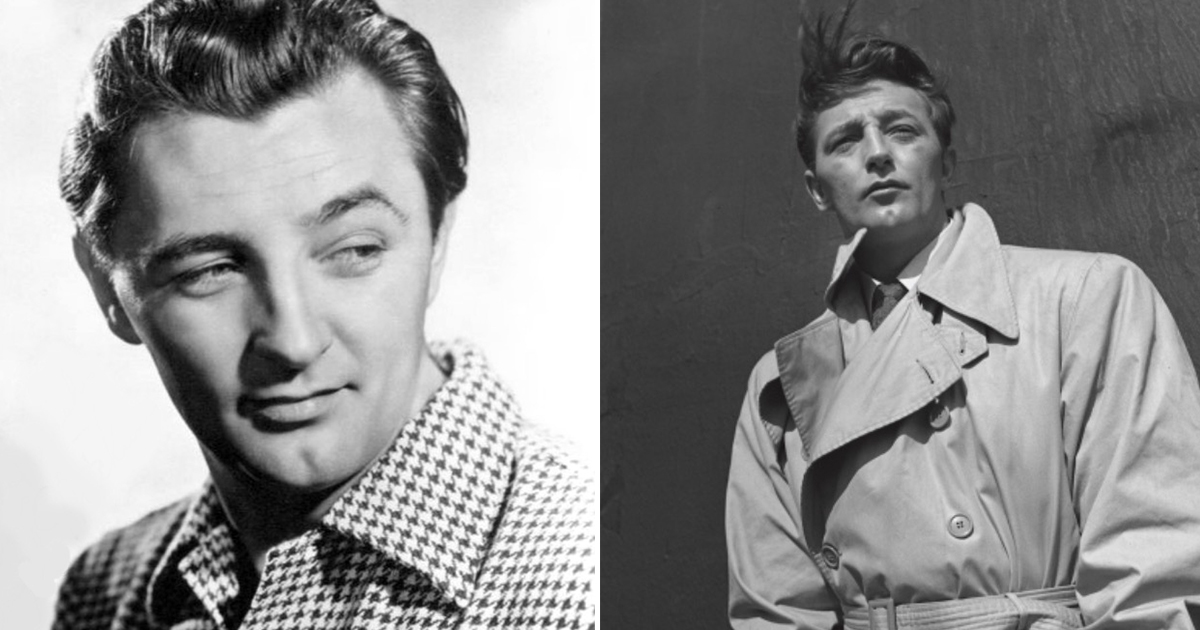 Hollywood’s first bad boy, Robert Mitchum – could anybody ever forget him? In my opinion, Mitchum was cool, before it was cool to be cool …

To me, he’s definitely one of the greatest movie stars of all time, along with such legends as Kirk Douglas, Charlton Heston, John Wayne and Burt Lancaster.

I remember that Mitchum had the most piercing eyes – it was as if they could see right through you. But Mitchum wasn’t only a very talented actor – he also released some good records as well.

The movie “Thunder Road”, 1958, is proof of Mitchum’s many skills – in the classic drama/crime film he acted, directed, co-wrote, wrote the title song and sang it as well!

But there’s also another side of Mitchum that not everyone knows about. Beneath his good looks and charming exterior was a tormented and troubled mind that experienced many scandals and tragedies.

Robert Mitchum was born in 1917 in Bridgeport, Connecticut – straight into a traditional, American working-class family.

His father, James Thomas Mitchum, was of Irish descent and worked on the shipyard and on the railroad – he was one of those people who literally built our country. Robert’s mother was an immigrant from Norway, bearing the Scandinavian-sounding name Ann Gunderson.

Unfortunately, Robert’s childhood would be shaken by a terrible tragedy. When Robert was just 18 months old, his father died in a freak accident. The elder Mitchum was tragically squashed to death by two boxcars while working at a railyard in Charleston, South Carolina.

Over many years after her husband’s passing, Ann had to raise Robert and his siblings single-handedly. But then his mother married Major Hugh Cunningham Morris, a former Royal Naval Reserve. The British officer became Robert’s stepfather.

But neither his stepfather, nor his mother could control Mitchum.

He was a wild child, and as a result at the age of 12, he was shipped to live with his grandparents in Felton, Delaware. Mitchum was also expelled from several high schools – he often had disputes with the authorities at the school. Once, he even got into a fistfight with his school principal.

After being moved around to several different places, he moved in with his older sister in New York’s infamous Hell’s Kitchen district.

But the problems continued. When Mitchum was 14 years of age, an officer saw him in Savannah, Georgia, and detained the young man for vagrancy. Robert was subsequently forced to work in a chain gang. But, according to himself, he managed to escape and hitch-hike his way back to his grandparents in Delaware.

Back in Delaware, Robert met the love of his life – Dorothy.

She lived next door to his grandparents and the couple married in 1940 – Robert and Dorothy Mitchum would stay married all of their lives.

After the wedding, Robert and Dorothy moved to California, where Robert had gained a foothold in the entertainment industry. Before that, he had made a living as a coal miner and a semi-professional boxer.

When the couple’s first son, James, was born, Mitchum realized he needed steady employment. During WWII, he worked as a machine operator for Lockheed Aircraft Corporation, but unfortunately he damaged his hearing at work due to the constant, loud sound from the machines.

Robert also suffered a nervous breakdown due to job stress, causing him temporary blindness. Maybe it was then that he realized he wasn’t made for a regular 9-5 job?

In any case, Robert began to look for a way back into the film industry. He worked as an extra and supported actors in several productions. His major breakthrough, however, came as a soldier in American war film “The Story of G.I. Joe” (1945).

During the ’50s and ’60s, Robert Mitchum became hugely popular after several starring roles in classic film noirs. He was sometimes referred to as ‘the soul of film noir’.

The audience loved him as the smooth, drawling, nonchalant antihero hero with sleepy eyes – he was awesome no matter what type of character he played. And, by the way, his sleepy eyes wasn’t a gimmick. It was due to chronic insomnia and an injury he got during a boxing match that caused astigmatism in both eyes.

Simply put, Robert understood that you didn’t have to roar like a lion to gain respect.

In 1955, Mitchum gave one of his most memorable and best performances when he played an evil, charlatan preacher in the thriller “The Night of the Hunter”. Today, the movie is considered one of the greatest films in Hollywood history.

“I wanted to take it all the way,” he said. “I wanted to scare people to death. The book did that. It was ten times as frightening as the picture. But Charles had such good taste. He kept saying, ‘I make my living reading the Bible. I can’t do this sort of thing.’ As it was, it was pretty good… I guess.”

As it happened, Robert’s on-screen bad boy wasn’t too far away from his rough personal life.

“The only difference between me and my fellow actors is that I’ve spent more time in jail”, as he once put it.

In 1948, Mitchum saw his first Hollywood scandal, when he was arrested for possession of marijuana – a big deal at that time, even though he was a known marijuana user.

Mich was imprisoned for a week in county jail, which he described “like Palm Springs, but without the riff-raff”). After that, he was forced to spend 43 days at a prison farm in California.

Mitchum’s career would survive the scandal – and in retrospect, perhaps it was worth the time and all the headlines. After the bust, Mitchum became an even bigger box-office draw.

”The only effect that I ever noticed from smoking marijuana was a sort of mild sedative, a release of tension when I was overworking. It never made me boisterous of quarrelsome. If anything, it calmed me and reduced my activity,” Mitchum later explained.

Of course, Mitchum, with his lizard-lidded eyes, had a very hot temper at times.

Things grew particularly heated during the filming of 1955 flick “Bloody Alley”, when Mitchum’s bad-boy aura kicked in at full-speed.

Mitchum, who didn’t mind a whiskey or two, showed up on the set after a long night out. According to reports, the famous actor had an outburst and smashed the studio – all because there was no car prepared for him on set.

The former boxer then turned to the movie’s transportation manager, confronted him and threw the guy into the nearby San Francisco Bay.

It all ended with Robert being fired from the production and producer John Wayne being forced to jump in and take over Mitchum’s role.

Actor Jack Hawkins, who worked with Mitchum in the 1963 film “Rampage”, revealed his rebellious colleague’s hazardous ritual on set.

According to Hawkins’ autobiography, Mitchum drank 49 glasses of rum before dinner – while on the set.

How he managed to do his job after that amount of liquor is beyond me, but Mitchum had naturalistic skills and could live on his talent alone. Clearly, though, Mitchum didn’t have a lot of respect for actors who viewed the profession as challenging and hard work.

“This is not a tough job. You read a script. If you like the part and the money is O.K., you do it. Then you remember your lines. You show up on time. You do what the director tells you to do. When you finish, you rest and then go on to the next part. That’s it,” Mitchum said.

It’s safe to say that Mitchum had a very relaxed attitude to his profession. A quick look at some of his quotes gives a pretty good idea about the person behind that curling, serpent’s smile.

”Listen. I got three expressions: looking left, looking right and looking straight ahead,” Mitchum said, when explaining his acting style.

Here’s another classic from Mr. Trouble himself…

”People think I have an interesting walk. Hell, I’m just trying to hold my gut in.”

Among colleagues, Mitchum was known for using a ”secret” code with scripts. His co-actors often noted that Mitchum wrote down the note ”n.a.r” on his scripts and that apparently meant ”no action required”.

According to the film critic Dirk Baecker, the note was Mitchum’s way of reminding himself to experience the world of the story without acting upon it.

In 1970, when Mitchum was filming ”Ryan Daughter”, he went through a deep, personal crisis. It went so far that Mitchum wanted to end his own life, something he planned to do after the movie was finished.

Mitchum’s friend, screenwriter Robert Bolt, heard about the alarming plans and tried to get Mitchum to change his mind. His strategy was to put up a hard fight and use “tough love”. Bolt basically told his friend to ”go ahead” -– but first he should respect his contract and finish the movie.

So, even though the audience really loved Mitchum and got to know him through his fantastic interpretations, the popular antihero carried a lot secrets and fought gallantly against his demons.

Many have speculated that Robert was unhappy with his job as an actor, as he himself once said. Some suggested he even hated his own work.

“Movies bore me; especially my own,” Mitchum was quoted once.

But in other interviews, Mitchum expressed great gratitude over his career.

“I got a great life out of the movies. I’ve been all over the world and met the most fantastic people. I don’t really deserve all that I have gotten. It’s a privileged life, and I know it. I didn’t make what these young guys, the Spielbergs, are making. But I had a hell of a lot of fun. Working with all the great leading ladies of my day. Marilyn Monroe, and Jane Greer. I think she was the most underrated of them all. Working with guys like John Huston and Raoul Walsh,” he said.

In the late 1990s, Mitchum’s rough and ready lifestyle began to take its toll on his body. He passed way on July 1, 1997 – just days before his 80th birthday.

Mitchum was a heavy smoker and died in Santa Barbara, California, due to complications from lung cancer and emphysema.

His body was cremated and his ashes spread into the sea. He was survived by his wife of 57 years, Dorothy Mitchum, and his children James, Christopher and Petrine Day. Dorothy, who died in 2014, often accompanied her husband to movie location shoots.

Rough, rebellious – and irresistible. Robert Mitchum was a great actor, with very special looks. Even when he was no longer young, like in “Winds of War”, it all came so natural to him.

You sure don’t see movie stars like Robert Mitchum anymore.