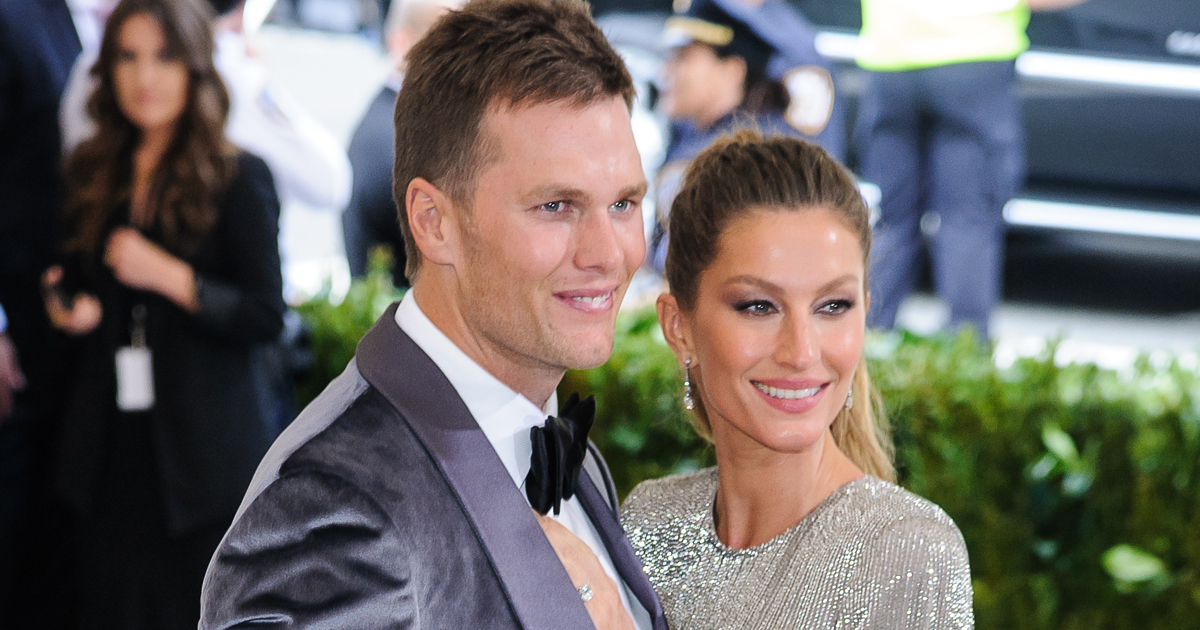 Some argue that Tom Brady is the best player in NFL History, and the stats make that argument a tough one to counter. Outside the field of play, his family is everything to him, with his children having two moms in the form of ex-wife Bridget Moynahan and current wife Gisele Bündchen.

The majority of people probably know all about Brazilian supermodel Gisele. But who is Bridget Moynahan, and when did she and Tom Brady date and have children?

This is the story of the Brady/Moynahan family, who prove that you can go a long way if you just love and respect each other.

News that Tom Brady had moved to Florida and joined the Tampa Bay Buccaneers struck the sporting world like a bomb. Following 20 years with the New England Patriots, the Brady family had decided to start a new chapter.

Tom Brady is looked upon as one of the greatest players in NFL history. But the fact remains that he hasn’t always been a huge star, not even in his own family.

So what made him the best? Well, plenty of training and support from his family are two of the reasons. But in the middle of his career, he went through a divorce, meeting a new love and having a child with his ex-wife at the same time.

One might think that would take all the focus away from his job, which in this case entails being one of the best quarterbacks ever.

But the fact is that the Brady family, including his ex-wife Bridget Moynahan and current wife Gisele Bündchen, have all done their best to get along. From the looks of it, they’ve succeeded.

Tom Brady was born on Aug 3, 1977 in San Mateo, California. He grew up in a family of sports fanatics, though it was his sister who was regarded as being the biggest star.

“The Brady Bunch”, as they were called, showed great prowess in sports. Tom’s three older sisters – Nancy, Maureen and Julie – were the original stars. They excelled in different sports, getting the spotlight while he was in high school. And rightfully so.

His oldest sister Maureen made the U.S Junior Olympic team as a softball pitcher, and later became an All American at Fresno State in California. Julie, meanwhile, was a soccer star, and landed a scholarship at St Mary’s. Tom’s youngest sister Nancy played softball at Berkeley in California.

“They were all stars — and beautiful,” Tom’s high school football teammate John Kirby told The Athletic. “He’d always see their names in the paper. Tommy had all that to look up to growing up. He saw that level of competition.”

Growing up, Tom Brady sure shared a lot of competition with his sisters. But that was a good thing; it gave him role models in his family to look up to.

He started off playing baseball and basketball, and it wasn’t until age 14 that he became interested in football. He became a quarterback at Junupero Serra High School, but ended up sitting on the bench.

Brady didn’t end up playing much at all, instead acting as reserve behind another quarterback.

He and teammate John Kirby, who also sat on the bench, resolved to make the starting lineup in their sophomore year. They worked out on their own for three days a week – on top of regular practice – and the next year, Brady showed what he was all about.

In his first game, he threw the game-winning touchdown.

“He’s done hundreds of those [comebacks] in his career, but that was the first one he really had”” Kirby said. “His very first game. We were losing and we marched all the way down the field in a minute and 10 seconds. He threw me a TD pass with 30 seconds left.”

Tom Brady went from being 0-8 as a freshman – while sitting on the bench – to leading his team to the league’s championship game as a sophomore. They lost the championship, but everyone now knew that Tom had a bright future in the sport.

“He wanted to be THE man and wanted to be the leader. After all these years, he lived up to everything he was dreaming for,” his high school coach Bob Vinal explained.

Parents Tom Sr. and Galynn knew their son had talent. However, they wanted to ensure that he was going to play football at a good university where he would get himself a great education at the same time.

In the end, Brady committed to the University of Michigan. In his senior year however, he shared the first quarterback role with another player. It wasn’t the best preparation before the NFL draft.

Brady was eventually drafted in the sixth round by the New England Patriots in 2000. Looking back, the Patriots probably got the best bargain in NFL history.

He might not have been the biggest star on every team he’s ever played on, but Brady always aimed to be the best, even though he oftentimes feared that he wasn’t good enough.

“Both personally and professionally, I have faced challenges and sought out people who had better professional insights where I could use their experiences to learn from,” Tom Brady told Forbes in July of 2020.

“In my young career I doubted myself a lot. When I saw things that weren’t going my way, I thought I was the victim of circumstance. But when I changed, shifted my view and my mind to say ‘I am not a victim, why don’t I empower myself.’ I could grow in ways I was struggling. Through working with psychologists and others, I learned you have to face the challenges and look at them as opportunities for growth. It was a lot of work, but it really paid off in my life.

“My wife uses a great line: ‘The teacher appears when the student is ready.’ You can’t force something to happen in your life. You have to just be open and embrace them when the time is right.”

Many argue that he’s the best to ever play the game of football. It’s likely beyond reasonable doubt that the now-42-year-old will eventually be inducted into the NFL Hall of Fame.

Besides playing the game, attracting fans all over the world and rising to fame, Brady lives a quiet life together with his wife, Brazilian supermodel Gisele Bündchen, and their children.

But he was married once before, and actually found out he was having his first child with ex-wife Bridget Moynahan while dating Bündchen.

Tom Brady met Bridget Moynahan in 2004. The footballer’s career was on the rise, but Bridget also was very successful in her own right. Appearing in both Coyote Ugly and Sex & The City, Moynahan was an upcoming actress who also got her big breakthrough around this time, starring in I Robot (2004) alongside Will Smith.

Brady and Moynahan dated from 2004 to 2006. The couple broke up, though, and later the same year, Brady started dating Gisele Bündchen.

However, the couple had dated for just a couple of months when Brady found out that Moynahan was pregnant with his child.

“Certainly, a lot of people make sacrifices for their family, and I’m dealing with a certain situation, a very joyous, happy situation”, Brady said at the time. “And some people have dealt with death in the past and that’s incredibly difficult.”

Tom Brady had started dating Gisele and had so company each and every night. For Bridget, however, the situation was different.

They broke up and she found out she was pregnant in a matter of weeks. And at the time it was tough, especially for Bridget.

“Going through that traumatic time of being heartbroken and then being pregnant turned my whole life upside down and inside out and just knocked the wind out of me,” Moynahan said in an interview with Harper’s Bazaar in 2008.

“But I got so much out of that. It’s golden and it’s tough and it was f***ked up. But now I have a child, and it’s the best thing in the world.”

Bridget got great support from her family members, friends, her co-star and friend Will Smith, and Tom Brady. They decided to raise the kid in the most loving way they could. It turned out to be a childhood full of love and two sets of parents.

For Brady’s then-new girlfriend Gisele Bündchen, it was a shock in the beginning. In her book Lessons, she wrote that it was uncomfortable.

“Two months into our relationship, Tom told me that his ex-girlfriend ]Moynahan] was pregnant,” Bündchen wrote.

“The very next day the news was everywhere, and I felt my world had been turned upside down.”

“Needless to say, that wasn’t an easy time. But it was a time that brought about so much growth.

“Jack, my bonus child, has been a huge gift and blessing in my life.”

Jack Edward Moynahan was born in 2007. For Gisele, it was tough in the beginning, but soon they all figured things out. In the end, the most important thing is love and respect, and Gisele, Tom and Bridget found a way to make it work.

Their son Jack is now 13 years of age, and today Moynahan says that their son has benefited from having two sets of parents. She’s now married to businessman Andrew Frankel.

“Tom and I made a decision to raise a child together and we both found partners that not only supported us in raising that child, but also loved our child as if he was their own,” Moynahan told People.

“I don’t think you can ask for more than that. My son is surrounded by love”

Jack has now grown up with two sets of parents and gotten really close to his step-mom, Gisele Bündchen.

Bridget Moynahan lives together with husband Andrew, her son Jack and Andrew’s three children from a previous relationship. She rose to national fame on the show Blue Bloods, in which she’s played the lead role. The show has aired for 10 years and produced over 200 episodes.

The next Brady superstar?

At the same time, she’s made sure to stay in touch and have a healthy relationship with Tom and Gisele. And in addition, they’ve also had children of their own.

As for Jack, the apple doesn’t fall far from the tree. Speaking on Live with Kelly, Bridget Moynahan says their son wants to follow in father Tom Brady’s footsteps. But not in football.

“I think right now he wants to be a professional soccer player,” Moynahan said. “Though after the Olympics he’s like, ‘I think I’m going to win a gold in swimming.’ Then it was Michael Phelps. So I think he just likes awards.”

Even though people divorce, it’s always important to put your children first, helping them to grow and giving them love no matter if the parents have split or not.

In our opinion, Bridget Moynahan, Tom Brady and Gisele Bündchen have been nothing less than amazing role models and parents.