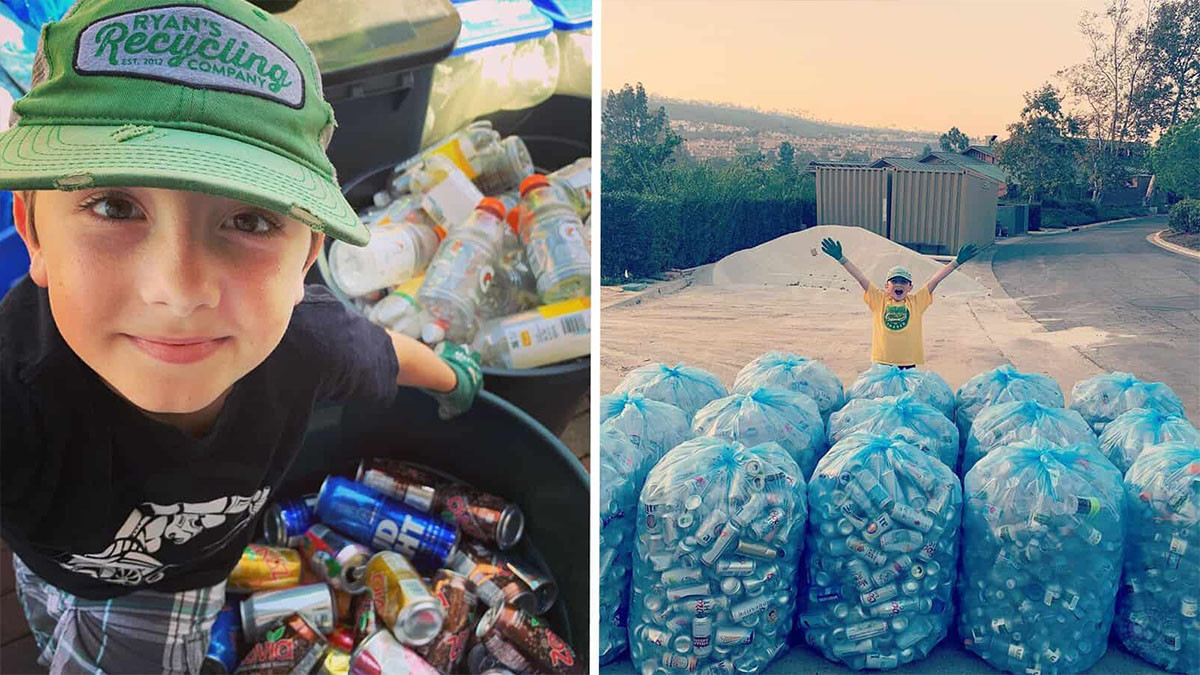 At just ten years old Ryan Hickman is doing more to help the planet than most adults.

The California native was inspired to start his own recycling company after visiting his local recycling center at just 3 years old.

He started delivering empty plastic bags to his neighbors in Orange County as well as his friends and family and asked them to save their cans for him.

Now he spends every week sorting through his donations to get them ready for the recycling center.

“I have recycled over 1 million cans and bottles, and I started recycling when I was 3.5 years old. Now I’m 11, so that was 8 years of recycling,” Ryan said.

Even at the young age of 3 he recognized the benefits of recycling.

“It was fun and I saw it was making a difference in the environment.

“Every single can and bottle that I recycle is not ending up in oceans, landfills, lakes, rivers, reservoirs, or for animals to eat it, get sick and die.”

It takes 450 years for a plastic bottle to decompose in a landfill and most of them end up in our oceans; around 14 per cent of the litter in our oceans consist of easily recyclable materials.

This litter can injure coral reefs and entangle or drown wildlife while some marine wildlife end up swallowing it causing them to choke or starve, as per Marine Litter Solutions.

As president of his company he has a lot of work to do outside of his school work and sports but the worthwhile work and the encouraging emails he gets from people all over the world, keeps him going.

“What keeps me motivated to keep recycling is just getting letters and emails from all over the world telling me thanks and keep up the recycling,” Ryan says.

He’s helping the environment on a much bigger scale than average but he says it’s the small actions that help create something big and make a difference.

Ryan has won many awards for his hard work setting up Ryan’s Recycling including the “2017 Citizen of the Year” by his hometown of San Juan Capistrano, making the MSN “top 15 kids changing the world”, being named the 2017 CNN Young Wonder, and making the Reader’s Digest 2020 List of Kids of the Decade Changing the World.

Ryan is using his business to not only help the planet but also save for a full-size trash truck as well as his college education, which at 7 years old he’d already raised $10,000 toward his studies, as per ABC News.

More people need to know about Ryan and the amazing work he’s doing for the environment, what an inspiration. I can’t believe how much he’s accomplished at just 11 years old.

Share this story with all your friends and family today.