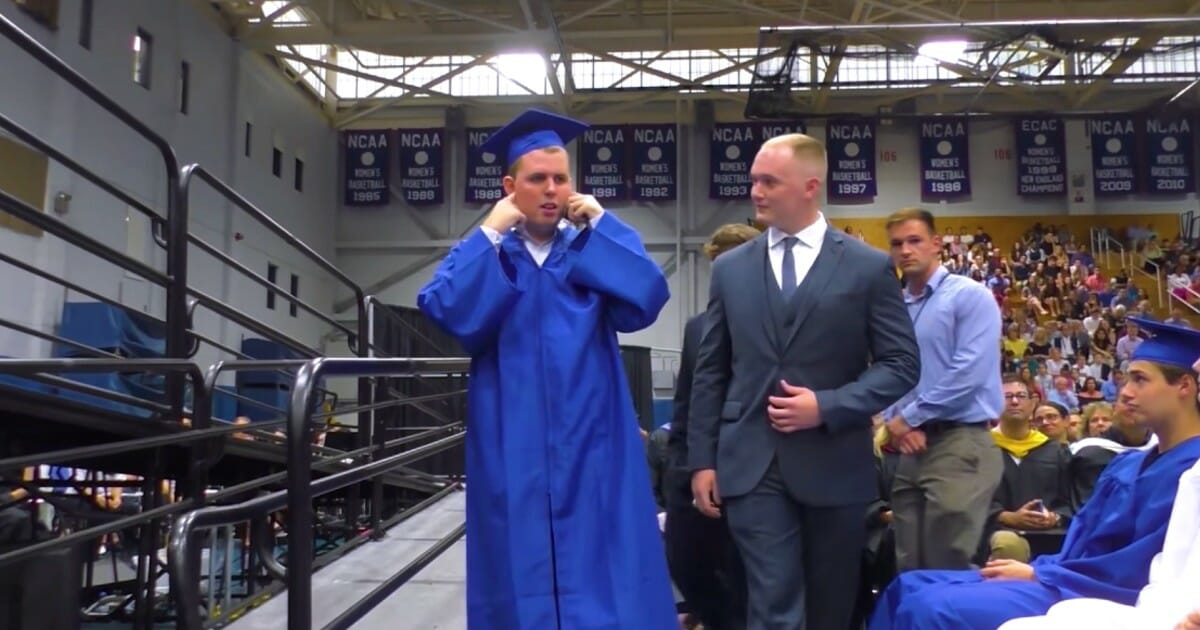 If you’ve ever been to a high school or college graduation, chances are you’ve been instructed to hold your applause until the end. If everyone were to clap after each graduate received their diploma the ceremony would take forever.

Those in attendance of Carmel High School’s graduation were also asked to hold their applause and cheers, but for a very different reason.

One of the graduating students has severe autism and does not respond well to noise.

When it came time for Jack Higgins, 21, to graduate Carmel High School in Carmel, New York, his parents wanted him to attend. They already knew he probably wouldn’t hit other milestones like graduating college or getting married, so they wanted him to receive his high school diploma.

“When you have a severe disability, like Jack does, you miss out on life,” Barbara Higgins, Jack’s mom, told TODAY.

Jack’s parents knew graduation wouldn’t be easy, especially because the graduating class consisted of over 300 students and more than 2,000 people would be in attendance.

“He has a lot of sensory issues, noise being one of them,” Barbara said. “It almost seems as if it hurts.”

His parents met with the school’s principal, Lou Riolo, and discussed what could be done.

The principal decided to have a silent graduation.

Lou talked the idea over with a special education teacher and the school’s vice principal, and then it was decided. This year, Carmel High School would have a silent graduation for Jack.

“We will do the National Anthem and then there will be a pause and I will explain what we will do. We are going to be silent and quiet because this is for Jack,” he told TODAY.

Some doubted the idea would work.

Although one of Lou’s friends doubted the idea, Lou remained optimistic.

At the graduation, he gave a speech explaining the need for everyone to remain quiet.

“Unlike many of us Jack is super sensitive to loud noises. So I am asking that we give Jack his diploma first at the beginning of the ceremony. In order to do that I am going to ask a big favor of everybody today,” he said.

Lou then called Jack’s name. The crowd remained silent. Jack made his way to the stage with his fingers in his ears, a coping mechanism, and after receiving his diploma his classmates rose to their feet and gave him a silent standing ovation.

Jack’s family was extremely appreciative of his classmates. They called the graduation “extremely heartwarming.”

“We will never forget it. It was one of the best experiences I have ever had,” Barbara said. “I hope the students never forget and realize what a difference they made in our lives.”

You can watch the tear-jerking moment in the video below.

This is such an incredibly sweet moment. I’m so glad Jack was able to participate in his high school graduation.

Thank you to all of his classmates for remaining silent, and congratulations to Jack. Way to go!