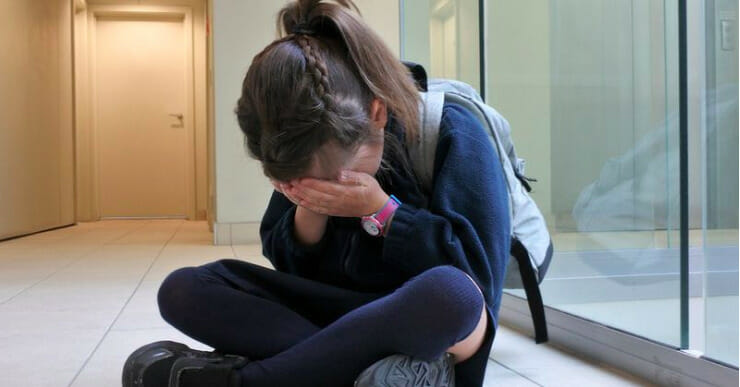 Teachers have an enormous responsibility towards their students. And for teachers of children with special needs, this is perhaps even more true.

Mother Amber Pack recently noticed that her daughter was behaving differently after coming home from school. The mother’s instincts told her something was wrong. So she secretly hid a recording device in her daughter’s hair — and that’s when she discovered the unthinkable.

The West Virginia, mother was in complete shock when she soon discovered that her 8-year-old daughter with special needs was being verbally abused at school.

Amber had enrolled her daughter at Berkley Heights Elementary School due to their specialized special ed classes, but noticed that her daughter was behaving strangely upon returning home.

She told her mother she no longer wanted to go to school and appeared traumatized. When the mother uncovered the truth of what was happening at the school, she was shocked.

My kiddos have been working so hard at learning the phases of matter! Today we watched a liquid turn into a solid by making our own butter! You butter believe it was a good time! ?

The mother listened to the audio recording and discovered that children in class were being verbally abused throughout the day, in a variety of ways.

Amber heard a range of distressing things in the recording, namely the children being threatened with violence, insulted and even have food withheld.

It turned out that children were undergoing verbal abuse arbitrarily throughout the school day.

Among the shocking things Amber heard were the teachers threatening to physically hurt the children.

“I ought to backhand you right in your teeth. How is that for anxiety?” one special ed teacher threatened.

“I’ll punch you in your face” and “I’m going to pull your hair until you start crying,” are other distressing examples.

The teachers also used derogatory terms to address the children, such as “pygmy,” “wench,” and “animal” throughout the day.

Homework is so hard some days. For any kid, but especially one with special needs. As his level of meds dips in the afternoon his ability to focus and control his reactions to things usually takes a nosedive. Sometimes that makes writing 5 sentences seem like an impossible task. For both of us. Last night was a good night though. Despite an after-school trip to the orthodontist, running his brother to lacrosse practice, me ruining dinner, and asking him to pick up his room, this little guy sat right down and knocked them out while I folded laundry nearby. But after that he was done. Doesn’t matter that he has a writing assignment that was due last Friday. I had a choice to make: I could either force it or enjoy the evening. So, I let it go and we had a great evening. And I’m more than just okay with that. ❤️ #specialneedsmom #specialeducation #doingmybest #adhd #tourettes

Amber even heard the teachers make lewd, sexual and vulgar comments to the children.

Spread the Word to End the Word… Be AWARE Not IGNORANT! #march6 #spreadthewordtoendtheword #inclusion #specialeducation because no matter our abilities… We all bring SOMETHING unique to the table

Through several recordings, Amber could hear hear a combination of regular school day activities, such as singing songs and story reading. But now and then the children could also be heard crying sporadically, with the teachers lashing out aggressively at them throughout the day.

She believes the entire class was subjected to verbal abuse and that their cruelty had been going on for a while.

The concerned mother was, naturally, extremely distraught after listening in on the audio clips.

The mother says she couldn’t eat for three days after listening to the recordings.

“I was so upset. Every time I looked at her I would start crying,” she says.

Posted @withrepost • @lolaaneke #WhatIfWednesday ?What if we live in a Nigeria where the government ensures that all children with disabilities receive FREE and APPROPRIATE public educational services in school settings that maximize their potentials? ?What if we had an effective quality assurance system whereby certified regulators are detailed to monitor and ensure that schools employ effective practices in identifying students who need special education services? ?What do you think? #FreeAndAppropriateEducation? #QualityAssurance?? #SpecialEducation ? #InclusiveEducation ? #YesWeCan?? #ForTheLoveOfSpecialNeeds♿ #GodBlessNigeria???? #ThankYouJesus!?? www.bit.ly/coachlola

Thanks to Amber’s motherly instincts and clever thinking, she could make the abuse public. She posted a recording of the abuse to Facebook and other parents with children at the school quickly became aware of the abuse.

Mother Kasey Murphy’s six-year-old son Owen is also enrolled at the school. When she heard of the abuse, she was absolutely shocked.

This time of the year is crazy busy!! My team and I are all doing assessments, trying to write IEPs, annual reviews, etc. We try hard to keep students on their schedules and routines, but they can feel our stress. If your team is feeling stressed like us, you will probably see an increase in students who struggle to control their impulses and emotions. We will need to help them remember and use their coping skills. Click the link in my profile if you need materials to help students with their feelings. . . . #weteachsped #sped #tpt #teacherspayteachers #iteachsped #iteachspecialed #lifeofaspedteacher #autismclassroom #autismteacher #sped #specialeducation #classroommanagement #behaviormanagement #spedtribe #spedsquad #specialed #spedontpt #spedontpt

Amber immediately contacted the school principal, the school district as well as local police to notify them of the shocking abuse. So far, authorities are so far claiming no criminal wrongdoing in this case, but have said that they do not condone the teachers’ behavior.

“I am not in any way condoning the verbal treatment of your children by the individuals in the classroom,” County Prosecutor Catie Wilkes Delligatti said following the release of the audio recording.

A post shared by Autism Classroom Resources (@autismclassroomresources) on Mar 5, 2019 at 7:13pm PST

The teachers have now been placed on paid administrative leave as the school district investigates the situation. State law prevents any further information to be shared by the school district, but the federal Department of Education will soon reportedly be involved.

Thankfully, the children have meanwhile been placed in new classrooms with new teachers.

According to the children’s parents, the students appear to be doing much better now.

The countdown to my next big adventure is on!! ? I’ve always been incredibly lucky in the work that I do. Every day brings me something new and expands my knowledge and my heart. Next week I get to start a new chapter, in a new classroom where I get to expand myself even more. ??? • • • #specialeducation #paraprofessional #educationalassistant #spreadkindness #shyspositivelife #newchapter #abilitynotdisability

I really hope these cruel teachers get the justice they deserve! Share if you agree no child should ever be treated this way!