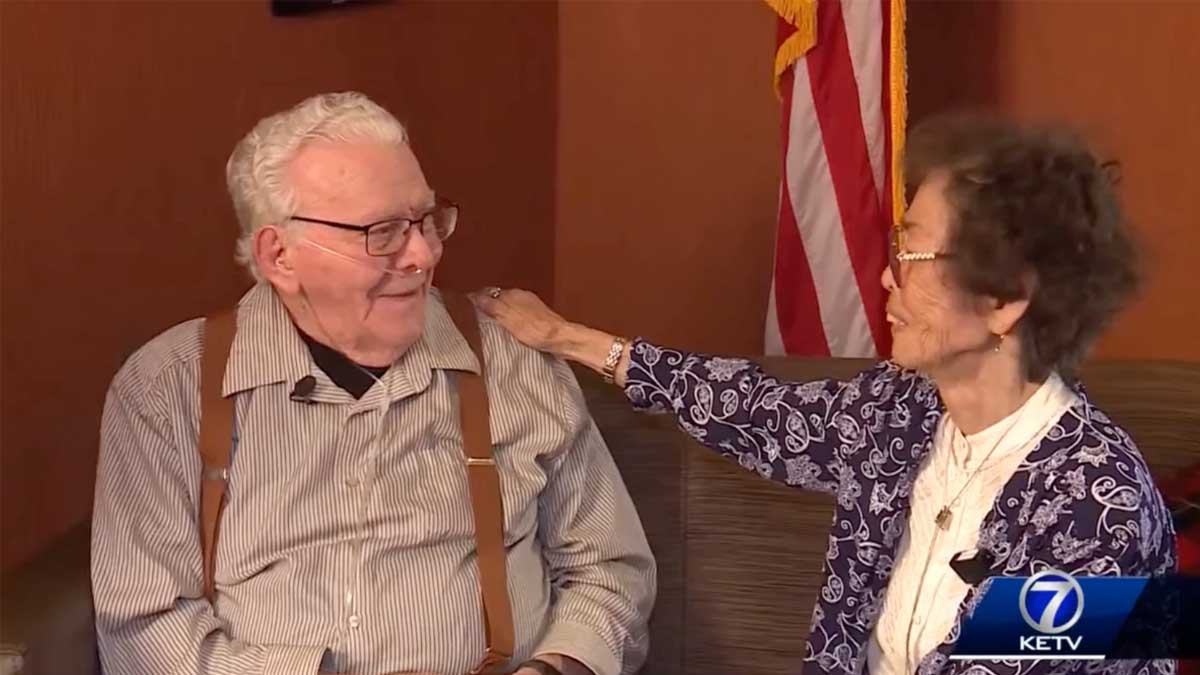 Is it possible to live a life without regret?

Most of us have wondered “What if?” at least once in our lifetime, and while we may not necessarily be disappointed with the way our life turned out, we can’t help be curious if one different decision would have changed our life’s path.

“I’ve had a great life and I’ve been blessed a lot, but I just have that one thing that has stuck with me,” Duane Mann told KETV.

The 91-year-old Korean War veteran never forgot the love of his life whom he met when he was serving in the Navy. The two planned to get married, but circumstances forced them apart and they went on to live separate lives.

Recently, Mann began a search to find his love, and in less than two weeks the former love birds reconnected.

“I really loved to dance and she and I found out we could really dance together, I mean to where people would watch us,” he said. “And gradually we fell in love, we couldn’t stop it.”

The couple dated for over a year and believed they had three months to plan a wedding before Mann was discharged. But then President Dwight D. Eisenhower pulled all Navy personnel from Japan.

“We didn’t have any time to get married, we were just trapped.”

It was 1954, and the last time Mann saw Yamaguchi, it was a moment that’s stayed with him forever.

“I can see her standing there, crying and pregnant,” he said.

Mann, a native of Iowa, assured Yamaguchi he would send for her once he was stateside.

However, when he returned home he learned that his father, who ran into his own troubles, used all the savings he had. Mann immediately found a job so he could bring Yamaguchi to the United States.

The two sent weekly letters to each other, but one day they stopped.

“In that letter, she told me she married an Air Force man and that she had lost the baby and that was just dead for me,” Mann said. “I was pretty well devastated.”

Little did Mann know that Yamaguchi continued to write him, however his mother burned her letters.

“It was over. It set in, that idea that I abandoned her just wore me out and that’s not an honorable thing to do,” he said.

Both seemingly moved on and lived fulfilling lives, but in the back of his mind Mann never stopped forgetting how he abandoned his first love.

“It’s something that’s bothered him all his life,” Janel Cogdill, his youngest daughter said.

With the blessing of his children he shared his heartbreaking story on Facebook in hopes of finding some closure. Although he had very little information to go on, some very dedicated strangers were able to find Yamaguchi in less than two weeks.

All these years the two had only been separated by about 650 miles.

Although there were a lot of questions at first, Yamaguchi, now 91, remembered Mann. Their families arranged for them to meet one final time.

“I cannot imagine carrying around that heartbreak for 70 years,” Theresa Wong, 23, a research for the History Channel who helped find Yamaguchi, said.

“I really hope this is just that opportunity to get closure and a release of all those years of worrying about it.”

After 70 years apart, Mann and Yamaguchi reunited. Yamaguchi’s son Rich Sedenquist, her oldest son, worried the two wouldn’t have much to talk about, but the former couple talked like the old days.

“I’m here to tell you that I didn’t abandon you at all. I just couldn’t find you,” Mann told Yamaguchi.

“Thank you for remembering and save all the pictures, you must have loved me,” she replied.

And Yamaguchi never forgot Mann either. One of her son’s middle name is Duane.

“Duane. D-U-A-N-E. Now it just came to light how I really got that name and it wasn’t by happenstance, it was for a reason,” Mike Sedenquist said.

This story brings tears to my eyes. I’m so happy that these two found each other again.