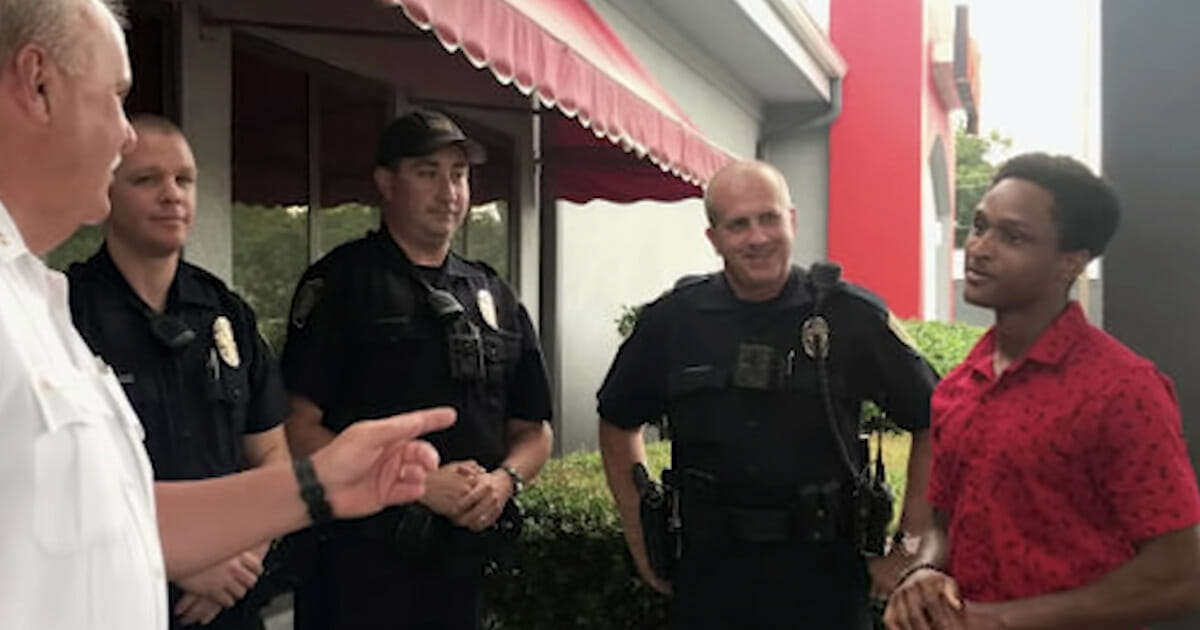 Talk about one determined young man!

One Alabama man was so set on coming to work on time on his first day on the job that he truly went above and beyond.

20-year-old Walter Carr was supposed to get a ride from a friend the morning of his first day of work, but when the ride fell through, he knew that he couldn’t afford to miss his start time. We was going to start working for the Bellhops moving company, and really needed that job.

So he decided to walk. His phone told him that it would take him 7 whole hours to get to the destination—Jenny Lamey’s house.

“I’ve never been that person that gives up,” he said. “I’ve just never seen myself doing that. I can only be defeated if I allow myself do be defeated.”
Share
Tweet

He got to walking around 11:40 p.m. Friday in Homewood, a suburb of Birmingham. He made it to Pelham by about 4 a.m. Saturday.

That’s when police officer Mark Knighten, who was making his rounds in his patrol car, saw the young man sitting on the ground to catch his breath. He pulled over and was touched by this young man’s story.

“Less than a minute from hearing his story, we were like, wow, this kid seems determined,” Knighten said.

So he and his partners took Walter out for breakfast, bought him lunch, and took him to a church to rest.

But Walter’s journey wasn’t over. He still had some ways to go. He started walking again, and this time, another officer found him and drove him the rest of the way to the Pelham home of the customer, Jenny Lamey.

When he arrived, Jenny was so impressed by his dedication that she offered that he rest upstairs, in her home, until the other movers arrived. Wanting to stay professional, Walter refused.

“I just can’t tell you how touched I was by Walter and his journey,” she said. “He is humble and kind and cheerful and he had big dreams! He is hardworking and tough. I can’t imagine how many times on that lonely walk down 280 in the middle of the night did he want to turn back. How many times did he wonder if this was the best idea. How many times did he want to find a place to sit or lie down and wait ’til morning when he could maybe get someone to come pick him up and bring him back home. But he walked until he got here! I am in total awe of this young man!”

She ended up sharing his story on Facebook—a post that caught the eye of Bellhops CEO Luke Marklin.

The CEO stated, “We are a company that is trying to change a broken, not customer-friendly industry. We’re trying to transform that with a lot of heart and a lot of grit. And when I read that story on Sunday I was blown away, and I couldn’t think of a better story of what this company is all about.”

But it’s wasn’t just a few kind words that he offered. To help Walter, he decided to give him a generous gift: his own 2014 Ford Escape.

“It seemed like the car was going to be put to a lot better use,” Marklin said. “He’s just awesome. He’s our role model.”

Jenny herself was so inspired by Walter that she set up a GoFundMe page to help him out. The goal? Raise $2,000.

“I’m still in shock,” Carr said. “I thank him [Marklin] … I thank everyone for taking their time to listen to my story.”

What an incredible young man! He deserves every cent donated to his cause. Please share to support him on his journey!