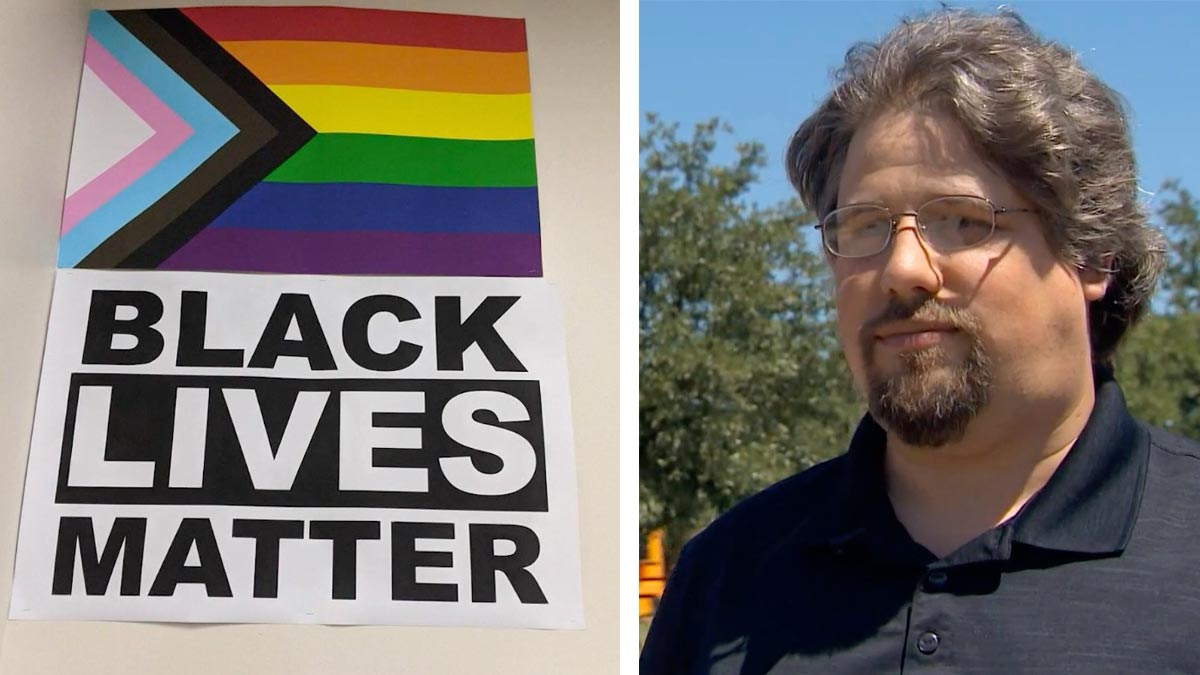 While there are a handful of reasons why children can be isolated and feel like they don’t belong in school, there are countless faculty and staff members who try their best to make their classroom a safe and welcoming place for all.

Dan Grunewald, a teacher at Timber Creek High School in Fort Worth, Texas, is one of those teachers who wants to make sure all of his students know they matter.

But administrators at his school have a problem with how he’s displaying his support for students.

“There are rules. It was a directive to take the sign down, and by not, I’m going against that directive. But it’s wrong. It’s wrong of my school’s administration, my principal, and my district to side with racism,” he told WFAA.

During the fall of 2020, Grunewald, who teaches animation, audio/video production, and arts of communication, hung a Black Lives Matter poster on his classroom wall.

He was told to take it down.

But both times administrators told him to remove it, he left it up.

Grunewald found it odd that Keller ISD administrators had an issue with the BLM poster, but not the Progress Pride flag poster that hung above it.

“I was told that Black Lives Matter is a controversial statement, which is simply not something I agree with,” Grunewald said.

“I figure it is a small gesture that I can make to my students of color that I see them. And they are valued and respected, not just in my classroom, but even those walking by, that I see them and value them.”

In a statement to Fox News, Keller ISD stated that administrators ask faculty to remove items on classroom walls that are considered “personal beliefs.”

“Keller ISD and Timber Creek High School encourage our teachers to create a classroom culture that respects diversity of our school community through a culture of understanding, and it is our expectation that they do so without visual representations of their own personal beliefs on classroom walls.”

Grunewald said that HR told him he could keep the BLM poster in his classroom as long as he laid it flat on his desk, which he said he planned to do.

This incident follows a report of two instances of racist images being painted on parking spaces at two high schools within Keller ISD.

According to the Star-Telegram, the mother of a student at Timber Creek High School saw pictures of parking spot painted with a white square and the words “is right” and another with a caricature of a Native American.

“I saw the images. Right away, I knew what they meant,” she said.

In a statement, the school district said the issues have been addressed and the parking spaces have been painted over.

What are your thoughts about the school district telling Grunewald he can’t display a Black Lives Matter poster? Does it matter that they seem fine with the pride flag?