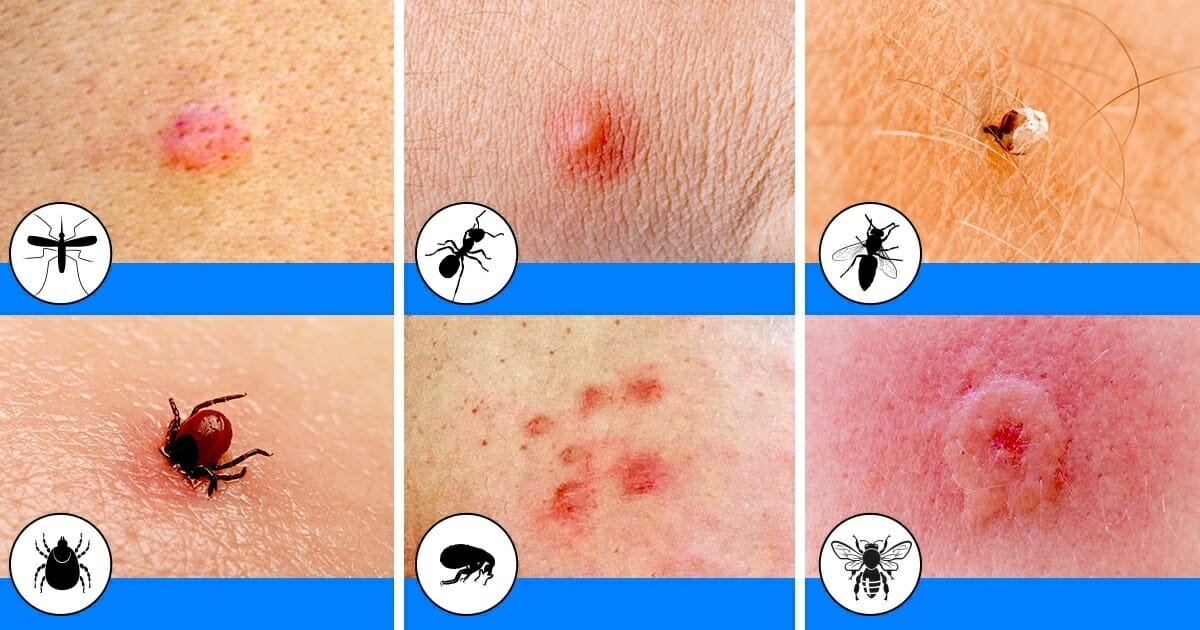 Let’s face it, virtually everyone is stung or bitten by an insect at some point in their life. Most people experience it every summer.

Obviously, it’s more common during warmer periods, but in any case it can be difficult to identify exactly what’s chosen you to be its victim (providing you don’t catch the culprit in the act, of course).

Certain infectious bites can actually become quite serious, causing swelling, skin damage or severe itching. Most bites from common insects are harmless, whilst others have the potential to transfer harmful bacteria/diseases.

As a result, it’s important to have an idea as to what exactly has bitten/stung you, and what you need to do to remedy the resulting symptoms.

In the immortal words of the Hitchhiker’s Guide to the Galaxy, Don’t Panic! Here you’ll find a small guide to help you find out what insects are bothering you… Being stung by a hornet is no one’s idea of fun. After a sting, the affected area is often red and very swollen. Blistering of the skin can occur, whilst cooling the area can offer relief.

In some cases, the sting of the hornet can cause an allergic reaction triggered by your own immune system.

If your stomach begins to feel cold or numb, your lips turn a shade of blue and breathing is labored, contact a doctor immediately. If you’ve been stung by a honey bee, the skin around the sting site can become red and swollen. After a time, it might itch.

The first day after the sting, swelling can increase and pain may radiate in waves from the area. Bee stings are usually harmless in the long term, and providing you don’t feel bad in yourself you can wait until the symptoms subside.

However, it’s important that you remove the sting, to prevent more poison working its way into your body. For the best results, scrape away the sting with a small gadget such as a knife or your own nails. Perhaps the most notorious of all summer blights, the wasp delivers a sting similar to a bite from other insects. The area can turn red and swell, whilst the victim will experience pain and potentially a terrible itch.

In some cases, bleeding can occur. Unlike a bee, wasps can sting several times, so it’s even more important that you know whether or not you’re allergic. Most people are familiar with mosquito bites, but all the same it can be difficult to know what’s what.

Mosquito bites look like swollen red spots, roughly the size of a small berry. Mosquitos like to suck blood where the skin is thin and it’s easier for them to reach blood vessels. When they feed, they inject their saliva into the wound, causing numbness in the area that makes it difficult to detect them in the act. Those who are bitten by a tick often don’t know it’s even happened. If you are bitten, however, you can expect a small red patch to occur where the tick has been sitting.

Normally the site shouldn’t be more than a few centimetres in diameter, whilst it’s not uncommon to find a small red lump in the center where the tick was feeding. Flea bites are difficult to self-diagnose, as they’re often mistaken for allergic reactions and mosquito bites. Unlike mosquito bites, however, these bites can be painful and extremely itchy.

Fleas commonly bite the legs of sleeping people, whilst the insects can bite several times in one ‘sitting’, so there’s often a pattern separated by gaps of around 1 to 2cm. Most ants pose no real threat to humans. However, red ants are a common pest around the world and are notorious for their painful bites – they can even end up scarring in some cases!

The ants’ poison contains toxins that can cause allergic reactions and – in extreme cases – anaphylactic shock. Commonly, though, symptoms are mild and in many ways similar to a bite from a mosquito.

An ant bite will often appear as a pink spot, with the skin around it tender and itchy. At the moment of the bite, a person may experience a sudden pain. If you’ve ever been bitten by a horse-fly, you’ll know you don’t want it to happen again. In rare cases, horse-fly bites can cause blood poisoning and infections.

They may look like big, fat flies, but the blood-sucking horse-fly can deliver a hard and painful bite, often leaving a mark and inducing swelling.

Wash the area with cold water and apply ice. If you notice small red dots that look like mosquito bites, in places where hair grows – for example, on your head, neck or behind your ears – it could mean that you have lice.

Severe itching is the most common symptom of head lice, and comes as a result of their biting. To be sure you have lice, run a lice comb through your hair and see what comes out in the sink. Lice are most commonly between one and three millimetres long, with translucent bodies. Bed bugs are something you never want to experience.

Bites from bed bugs resemble those from mosquitos, though they often follow zigzagging patterns. Common symptoms include swelling, redness, pain and sometimes puss.

Unfortunately, you can’t get rid of bed bugs by yourself, even if the bites go away. Contact a professional extermination company to help with your bed bug problem.

Keep in mind people on your Facebook may need to know the difference between the different affects brought on by insect bites and stings.

Don’t forget to share this article with your loved ones! Help them this summer.