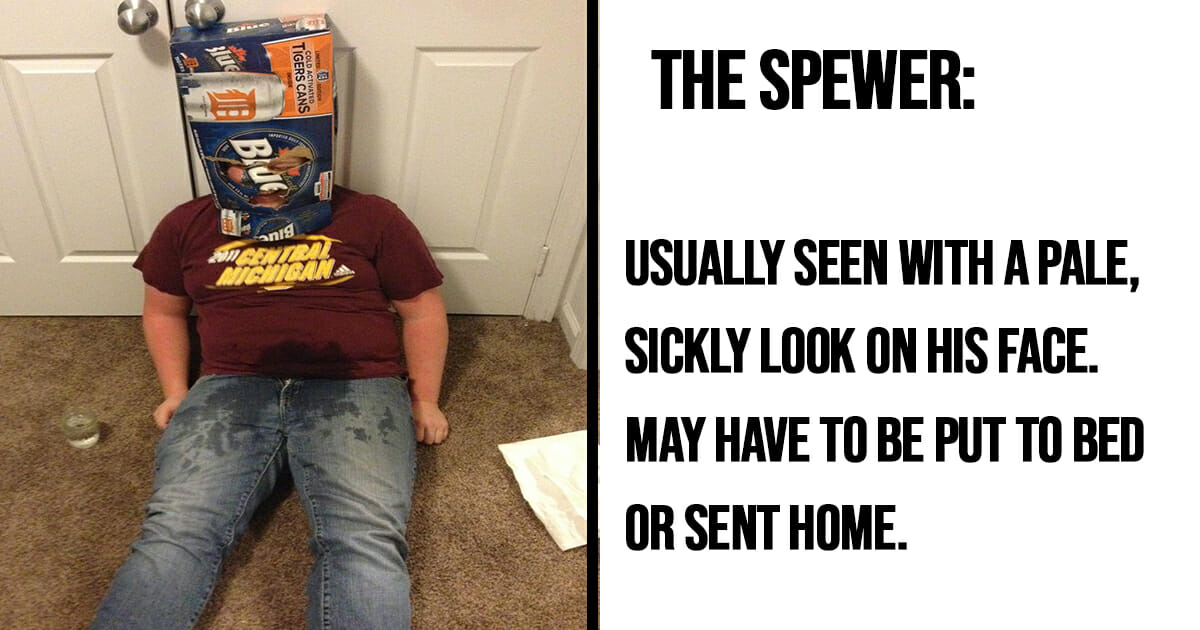 Beer. Some experts say it’s the thing that keeps us alive, others that we’d be reduced to mere emotionless zombies without it.

Alright, I’ve never actually heard someone say those things, other than my friends on a hungover Saturday morning, but I think we can all agree it’s conducive (big word alert) to happiness and health (don’t quote me on the last one).

That said, few can deny that drinking beer brings out a different beast in all of us. Some people become funny, some become sad, some have energy for days, others can’t string a sentence together.

Part of what makes drinking beer – particularly at parties – so much fun, is the unpredictability of it all. Imagine the scene: you’re at a party, or else in a bar, and the amber nectar is flowing. What social group do you fit into? What character do you become?

Well, in the interest of finding out, we’ve gone to some lengths to detail each one. Have a read below, comment which number you are, and, more importantly, which one your friends are!

We all know The Spewer, and The Spewer knows The Spewer better than anyone. He’s the guy who can’t handle his beer past the third-can stage.

Usually seen with a pale, sickly look on his face, chances are The Spewer will make at least one trip to the toilet over the course of the night, and not to empty his bladder or bowels. Serious Spewers may even have to be put to bed or sent home in a cab, despite the fact they’ve had the same amount of beer as everyone else. Never, ever, give The Spewer hard liquor.

Sadly every friendship group has a scrimper. You know the one: they turn up to a house party with a random assortment of three cans of weak beer, even though they’ve been told it’s going to be an all-night affair. Often heard repeating the phrases “can I nick a can?” and “anyone got a spare beer?”.

They’re usually the same guys who conveniently “forget” to buy their round when everyone else has. Can also usually be heard promising to pay for their share of the taxi by getting someone a drink “when we get in there”. Never in the history of the world have they made good on this pledge.

Coming in all shapes and sizes, Mr. Responsible never drinks one sip over a pre-agreed limit. He has a stack of excuses he wields like a samurai wields a sword, including all-time classics such as “I’ve got work in the morning”, “I’m not feeling very well”, and “Take it easy, we have all night.”

Mr. Responsible might be seen with a beer in his hand from time to time, but you can guarantee he’ll nurse his pints in a way that would make Florence Nightingale proud. Also goes by names such as “Fun Sponge” and “Virgin”. Probably likes knitted sweaters.

He may not wear red and have a huge white beard, but boasting a large gut is a possibility. Whereas The Scrimper naturally tries to have a night wherein he pays for less than f*** all, Santa couldn’t be more generous, so long as the end goal is blasting his friends into a drunken oblivion.

To Santa, the idea of turning up at a party without a full crate – and probably a few extras – is unthinkable. He places cans and bottles in every free hand he spots, and the people love him for it. Chances are you’ll see The Scrimpers hanging off Santa like bats on the roof of a cave, but that doesn’t get him down. Santa’s perfectly happy to feed the poor and thirsty, just so long as everyone keeps the party going.

If you offer The Snob a standard can or bottle of cheap lager, you’ll either get an affronted look or a “I’m OK, actually”. In any case, he’s not drinking it. In fact, he’d rather go without than drink a Budweiser.

The Snob likes his beer like he likes his imaginary women: wildly over-priced, difficult to obtain and often strange to the taste. He could well turn up to a party with four bottles of a beer brewed by Romulus and Remus before 750 BC, but you won’t be getting your grubby hands on any of it.

Take your eyes of this little devil for one second and he’ll vanish like Ben Kenobi. The Sneaker is usually game for drinking as much beer as he can handle, and he’ll pretty much always be up for continuing the party … at least when it comes to saying so.

The Sneaker is a creature that cannot be trusted as the night wears on. Keep him away from taxis, away from fast-food shops and away from exits, and you may just have a chance. If you lose sight of him, he’s as good as tucked up in bed already.

Cut from the same expensive cloth as The Snob, with little to tell them apart. However, whereas The Snob refuses to dip his silver spoon below a certain level, The Connoisseur is a purveyor of strange and exotic beers that few of us can pronounce and even less have tried.

The Connoisseur will often go to parties with a bag full of different coloured cans he calls “craft beers”. Much in the same vein, he will visit breweries and do things like smell his beer before he drinks it, so he can spend a moment or two living in its smokey aroma. The Connoisseur is perhaps not as despicable as The Snob to the common lager lout, but they can be every bit as strange.

If we lived in a Pokemon world, The No-Show would be the next step in the evolutionary scale from The Sneaker. No matter what the occasion, or how big the event appears to be, The No-Show will, as his name suggests, find a way to wriggle out of turning up.

The No-Show can vary when it comes to the tactics he employs. Some will claim tiredness, sickness, family birthdays or girlfriend obligations, some will straight up tell you they have no interest in spending their Friday night repeatedly punching their liver with an iron fist. Some – and these are the most dangerous ones – will promise they’re coming right up until the moment you text them halfway through the party for an update. The No-Show is the villain of the beer world. No more needs to be said.

You can predict what beer Mr. Loyal will show up with, and you can predict how he’ll drink it. He’s reliable, consistent and almost never transitions into The Spewer.

All hail the king. He sleeps atop a throne of empty crates, merely waiting to stir so he can begin his next death-defying adventure. The Nutcase will drink whatever is passed to him, and then perform any stunt asked of him irrespective of what the outcome looks like.

We all need a Nutcase in our lives, even if they take things too far on (multiple) occasions. Chances are, The Nutcase will never truly learn from his lessons, no matter how many times things go wrong or he is told “you need to calm down”. If you don’t have a Nutcase in your group, chances are you’re it. Congratulations, my friend, enjoy your life while it lasts.

There we have it! What we want to know is which type of beer drinker are you?