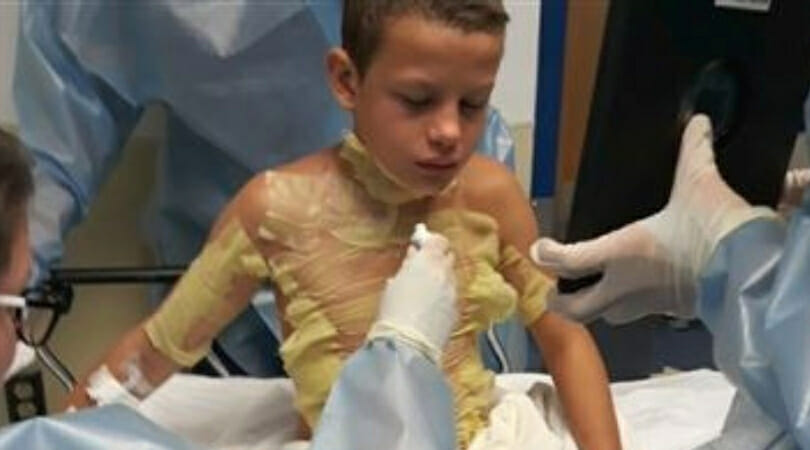 Though social media has undoubtedly brought the world closer together, connecting us in ways previously inconceivable, it has a lot to answer for when it comes to enabling dangerous trends.

Over the years, several challenges and trends have arisen, those both dangerous and foolish. More often than not it’s children and teenagers who spread and engage in them, resulting in injuries and sometimes even death.

Many of you will have heard of the “Tide Pod Challenge”, encouraging participants to eat laundry detergent, others may be familiar with the “In My Feelings Challenge”, where teens dance beside their vehicle as it moves along.

A warning is now being issued regarding the so-named “Fire Challenge”, after a 12-year-old boy was badly burned when his friends set him alight using nail-polish remover.

Tabitha Cleary says her son Jason suffered second-degree burns after his friend sprayed him with nail polish remover and set him on fire. The incident, which took place at a friend’s house, saw Jason hospitalized for four days.

According to reports, the boys had tried the challenge previously, though they were able to put the fire out on that occasion as it didn’t spread. Jason, however, wasn’t so lucky second time around.

The flames caught and burned Jason’s arms, neck and torso, leaving him in immeasurable pain.

It should go without saying that any parent who hears or sees anything linked to this “Fire Challenge” should take steps to ensure their children are not involved and cannot be coerced into joining in.

Jason may have suffered burns to his body, but it could so easily have been far worse for him.

We all know kids and young people will make mistakes as they grow and develop, but some things are simply beyond the realms of acceptability.

This “Fire Challenge” serves no purpose but to put kids in danger. Together, we must make a stand to ensure it’s rooted out once and for all.